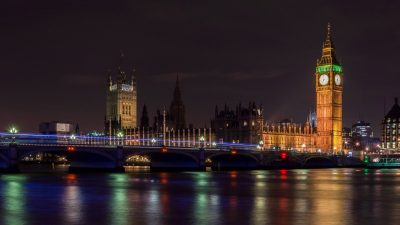 Great Britain is a nation that combines tradition with modernity. If you are looking for a cultured yet cool name for your dog, then you have arrived in the perfect place of the internet because we have for you a list of the best British dog names inspired by the UK, England, Scotland, Ireland, and each nation’s culture.

This country is famous for its long and rich history, royal family, and great artists. Because of that, you will be able to find a name that matches perfectly your pet’s appearance and personality. To make it easier for you, we have even made categories with special suggestions!

Don’t forget to look at our incredibly long list of puppy name ideas for more inspiration.

The first option is Churchill, the surname of the famous prime minister who successfully led Britain through World War II. So, you can give your male dog this name if it is brave, skilled, and participates in competitions. Also, if the deal with it can turn complicated sometimes.

Next, we have Elton, the name of the world-famous British singer-songwriter, pianist, and composer that has won several awards, and sold more than 300 million records. This name can be the one for male dogs that are skillful, but that also have strong personalities. Look at our other music-inspired dog names!

Then we have Beckham, the surname of the famous former professional football player. This name can be ideal for male dogs that are sensitive, shy, but also sporty and athletic. It’s ideal for breeds that resemble such features as Greyhounds, American Pitbulls, and other pit bull breeds.

For outsiders, the plethora of British Monarchs can be a little confusing. We recommend this amazing family tree by the BBC.

Diana, the name of the Princess of Wales, the first wife of Prince Charles can be given to female dogs that are charming and friendly. While Edward, the name of Queen Elizabeth’s youngest son, can be perfect for dogs that are loyal and calm (e.g. guard dogs).

Next, we have the name Camelot, which refers to the castle and court associated with the legendary King Arthur. It can be perfect for ancient dog breeds that have beautiful looks, and unique personalities. It’d a superb name for a dog with such attitude or from a top bloodline of champions.

Then, we have the name Duke for male dogs that are brave and independent, yet obedient. While the name Baron is perfect for dogs that are skilled, smart, and easy to train. It’d be a good name for a Poodle or Poodle Mix, for example, because they’re genius dogs – smart, easy to train, and obedient to their owners.

Here are several options of british dog names for you to choose from:

The name Bruno that means brown is perfect for male dogs that have this coat color. We have these breeds as examples:

Next, we have the name Blackie. It sounds cute and once again, it’s perfect for female dogs that have black or dark coat. For example, Black German Shepherds, Black Labrador Retrievers, or Gordon Setters – it’s up to you how to use the name!

Another option is Dolan. This name has a similar meaning that the previous one since it means dark one, and is for both male and female dogs – so it’d be a good choice for a female Rottweiler with a deep and beautiful dark coat.

The name Boyd means fair-haired, and it will match male dogs that have gold coats such as Chow Chows, Golden Retrievers, or Afghan Hounds.

While Derry means red-haired, so obviously, you can give it to male dogs that have this coat color, such as Redbone Coonhounds, Pomeranians, or Hungarian Pointers.

The first name in this category that we recommend is Ada, which means rich. You can give this name to female dogs that are outgoing, skillful, but also, kind of spoiled.

Then, we have the name Brian that means strength. You can give it to male dogs that have muscular bodies and are able to perform difficult tasks because of their physical capabilities. However, what happens if you have a female dog that has either a strong body or a bold personality? Then, the name Bridget will be perfect for it since it has the same meaning as Brian.

Another good option for your male dog that is confident, and protective is Fergus since it means powerful and manly. We think that breeds such as the Boxer and the Rottweiler fit that description perfectly.

Then, for male dogs that you should not mess with because of their strength and toughness, Egan is a good name because it means fierce. It’d be great for fiery dogs like the Sharpei, known for their protective and territorial nature, making them excellent warrior dogs.

Finally, the name Branson that means strong and tough, will be the one for watchdogs that are protective and can become aggressive sometimes. It’d be a good name for sighthounds such as the Vizsla, or alternative, for a very alert and small dog like the Chihuahua.

The first alternative in this category is Bolton, the name of a town located in North West England that is one of the most productive centers of cotton spinning in the world. Therefore, you can give it to male dogs that are large in size, elegant, and have a soft coat.

Then, we have the name Camden, which refers to a district of North London known for being one of the world’s most famous markets. Therefore, this can be the one to name your female dog if it has a playful personality and an outstanding appearance. Ideal for dogs that always make themselves the center of attention.

Last but not least, we have the name Dalen that refers to an open valley. This term is used most frequently in Scotland and in Northern England. So, you can give this name to male dogs that like wandering off, are independent, calm, and beautiful.

Choosing a Great British Name for your Puppy

What do you think about all our British puppy name recommendations? Whether you want to reflect on your heritage, or you just simply love the culture, this is the page you were looking for.

We really have tried to capture the whole essence of this gigantic empire. So, take your time and meditate in order to pick the perfect Brit name for your dog.

If you just chose the name after taking inspiration from our guide, then feel free to write in in the comment section which one you chose and the reasons why because we will be happy to read your responses!