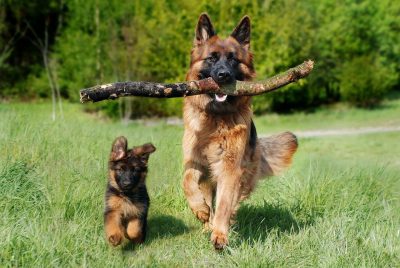 Our amazing list of the best German Shepherd dog names inspired by the breed, Germany, and its history! These names are perfect for new GSD puppies!

The German Shepherd breed is extremely loved, and perhaps the most popular in the World. Their strength and smart brain have allowed them to be part of important organizations around the world – search and rescue crew, military K9 groups, police dogs, and more.

Also, we have made some categories, so you can easily find the one that likes you the most.

German Shepherds are guard dogs since they have a protective instinct, and always take care of their families. If you agree, then give it the name Mena because it means “strength” in German.

We also have the name Petra – it means “strong” or “rock”. It will be perfect for female dogs that have a muscular physique, just like the German Shepherd. It’s also a great name for Pit Bulls and Rottweilers (also see our list of Pitbull names and Rottweiler dog names for more inspiration).

The next alternative is Katja. German Shepherds can be trained to help people with disabilities and are actually considered as therapy dogs, as well. Certainly, they have a kind heart, and this name will match perfectly these characteristics since it means “pure” in Greek.

If you have an affectionate female German Shepherd, then you can give it the name Asta that means “love”.

And the last one of this category is Zenzi. This name can perfectly describe how much healthy and athletic this breed is.

Worry not, we have a long list of German dog names you can browse freely, too.

Here are several options of german shepherd dog names for you to choose from:

If you want to give your pet a name that transmits the essence of its country of origin, keep reading!

We are going to start with the name Hessia, a place that has a rich and varied cultural history. So, this name can match very well a female German Shepherd since all people know they are gentle and smart.

Bavaria is the largest German state, and one of the most popular destinations of this country, and since the German Shepherd is one of the most loved breeds, it matches perfectly.

Frank and Franky work well as short versions for Frankfurt which is also the name of a type of sausages (the Frankfurter), therefore fitting a male Dachshund name to perfection!

And, of course, we cannot forget about Berlin, the capital of the country. If you want to show how ideal your dog is and that everyone pays attention to it, then that name is the one for it.

The first alternative we have for you is Zorro. The name of the masked, sword-wielding vigilante from many famous productions, will be perfect for your German Shepherd since they both have amazing skills, and keep their beloved ones safe.

Elektra is the name of a Marvel superheroine. It will be perfect if your female dog is powerful, easy to train and athletic.

Next, we have Jackie, the dimnituve for one of the most beloved first ladies of the United States because of her intelligence, beauty, and grace. Therefore, since German Shepherds are also smart and charming; , this is a good name to give it.

Another name idea for your female dog is Cleo, the diminutive for Cleopatra. This name can match perfectly the attractive qualities that German Shepherds have, along with their intelligence and strength.

Then, we have Thor, the name of the famous Marvel character. This one can fit very well the characteristics of your male German Shepherd because they are courageous and strong.

Then we have, Rocky. Who doesn’t remember this iconic character? We all do, so it will be a good name to give it to your male dog since German Shepherds are being self-confident and fearless.

The first alternative of this category is related to the fact that this breed is extremely intelligent and that makes them lead many investigations in which the need of a police and detection dog is crucial to perform difficult tasks.

This alternative we are talking about is Boss. Don’t you think this is a powerful and charming name?

The second one is Gregor. We know that German Shepherds are guard dogs because they are protective and loyal to their family members, then this name will match them because it means “vigilant”.

Next, we have the name Alphonse, that will be the one to stick out how brave, self-confident and gentle this dog breed is since it means “ready to fight and noble”.

We have described a great many fantastic capacities that German Shepherds have that make them special, so the name August is perfect for them because it means “outstanding and great”.

The combination of the muscular body and high energy that these dogs have, makes them perfect for this name: Britta, which means “power”.

German Shepherds are loyal and friendly dogs, so if you have created a strong bond with your male dog, you can give it the name Buddy to say that it’s more than just an animal to you.

On the contrary, if you have a female dog, then you can pick Dakota since it also means “friend”.

If you also want to emphasize its bravery, Baldwin is a good option, since it means “courageous friend”. But know this name is only for male dogs.

And last but not least, we have the name Alvin. This name will be useful to highlight how precious and noble your male dog is because it means “honorable friend”.

German Shepherds are incredible dogs. They reunite the best traits, since they are not only devoted to their families, but also smart, active and protective.

They have indeed won our love and affection. Therefore, they do deserve a good name that fits all these characteristics.

We hoped that you have found our guide helpful and feel free to share your choice in the comments section because it will be awesome to read your responses!