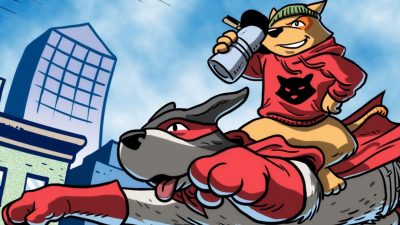 The mightiest superhero dog names for your pup. You got a little superhero at home, and our list inspired by Marvel, DC, Disney and many other multi-universes, genres and comics will bring you exactly what you are looking for.

They are excellent for any dog breed, and furthermore, they are perfect for every kind of pet: strong, calm, active, gentle, lovely, etc. You get it. You will find a name that describes the personality of your dog perfectly. Of course, you will describe what makes your little friend stand out from the rest, guaranteed. Over 200 options at your entire disposal!

Here are several options of superhero dog names for you to choose from:

You will agree with us that Marvel is on fire because they’ve been killing it with their cinematic universe. However, we have gone beyond movies, and thus, we have analyzed the comics, to come up with a solid list of the best superhero names for dogs, with love from Marvel.

If you got a yellow dog like a Golden Retriever, then you could it Thor, or perhaps, Asgard. Both are excellent choices, and therefore, you should consider them. However, they apply for any other kind of dog, nonetheless, they would be a great fit for Nordic dog breeds like the Karelian Bear Dog or the Elkhound.

If your dog is as strong as a mountain, but calm like an angel, then you could opt for Hulk, or perhaps, its alter ego, Banner. Up to you. It’d be great for big yet calm dogs like the Great Dane. Tons of power, but also tons of control and calmness.

You could also name it Captain America, as one of the most iconic heroes of the Marvel Multi-Universe. If you wanted to shorten it, then you could opt for Cap.

If your dog is fun and irreverent, then you could opt for Deadpool, one of the funniest antiheroes of Marvel. Bonus points if it’s a red-haired puppy!

Hawkeye would be an excellent name for a watchdog. It goes straights to the point, and on top of that, it represents one of the bravest heroes of Marvel, which despite having no superpowers at all, still comes to save the day.

If you got a Siberian Husky, then you could name it Logan or Wolverine. Both options are excellent ideas. Furthermore, it’d be a good pick for a guardian dog.

Finally, if you got a very sweet and lovely dog, you could name it after one of the cutest and most lovable characters that Marvel has ever created, Groot! For example, it’d be heavenly for a Chihuahua.

As you can see, Marvel is a magnificent source of inspiration for superhero dog names. However, now let’s see what DC brings to the table.

Clark or Superman. The most iconic personalities of the DC Multi-Universe. If you think that your dog shares similar traits to the most famous DC hero, then here you have a formidable recommendation.

You could also opt for Bruce or Batman. For some reason, it’d be an amazing choice for a Thai Ridgeback, because it’s an elegant, sophisticated and black-coated dog breed, just like what Batman represents aesthetically. Furthermore, it’s also brave, just like the superhero.

Not a superhero, but still part of DC. You could opt for Quinn, as in Harley Quinn, the partner in crime of the Joker, the eternal enemy of Batman. If your dog is kind of a roguish, then here you have a very unique and cool-sounding name.

Also, you could name your female pup as bat-woman, Kate. If you are a real fan of DC, then it’s one of the best superhero dog names for your pet.

As you can see, DC is also full of cool and unique names for your puppy. You will find many others once you explore our full list, which is completely at your disposal, free!

Now that you have our suggestions for superhero dog names in your hands, it’s time to use it wisely. Our best tip is to analyze the appearance and personality of your puppy because it will allow you to identify key traits between your pet and the hero you want to name it after. As simple as that.