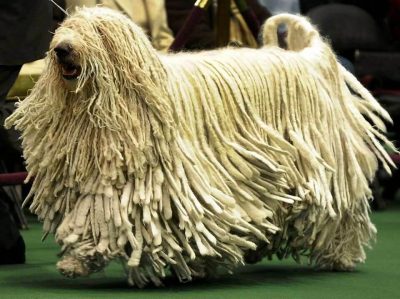 Does your dog have rare characteristics or a unique personality? If so, then we have for you a list of hilarious weird dog names! You will find the most unconventional name ideas for your puppy.

A great list of the weirdest dog names to give to a very unique and original puppy! We are sure that if you give your pet any of the names we suggest, they will definitely stand out from the crowd. People will start to think how cool, and “out of the box” the name is.

The first alternative is Joli. It sounds nice, right? But do you have any idea what it means? It means “pretty” in French. Therefore, if your female dog has a beautiful coat or a lovely personality, this name is perfect.

Actually, beauty is subjective. Even if your dog doesn’t have the most desirable traits, you just love them just the way they are. So this name will work just as well. Bete is another French word and this one means “beast” or “dumb”. You would use it in a sarcastic way, obviously!

But what if your female dog is fierce, not friendly, and has a strong appearance? Then, Fera is a weird female dog name because it means “beast” in Portuguese. But of course, few people will speak that language, so hardly anyone will know the strong meaning behind this name. This name sounds also like Flora, which will make your girl dog stand out in the crowd.

Is your female dog barking whenever it gets scared or angry? Then give her the name Gelta because it means “bark” in Icelandic. While if your dog has a dark coat color? A great alternative is Sable which means “black” in Old English. An elegant, powerful, and towering name that will make your dog as unique as its essence.

If you have already developed a strong bond with your new buddy, and is very precious to you, you can consider the name Emiko because it means “blesses and beautiful child” in Japanese. It’s a precious choice, especially if you love your dog as it were your own child. And this is the case for many pet parents!

Does your female dog seem to be expressive, and somehow sense your emotions and react to them? Then don’t you think that Nishka, which means “honest” in Hindu, is a good name to give her?

On the contrary, if she is big and strong, you can pick the name Kova. It means “tough” in Finnish. (We also have a list of names for tough-looking dogs!)

If your male dog is confident, caring, calm, and has a dark coat color, then what do you think of Obama as its name? Darwin, the last name of the great English naturalist, geologist, and biologist, is perfect a dog that’s smart, gentle, and curious.

Next, the name Aristotle. Like the important Greek philosopher! It is a good option for ancient breeds that love to explore, that are smart, and caring. However, remember that this name is for male dogs.

Then, we have Astro, the weird dog name of the canine character from the animated sitcom “The Jetsons”, which can be perfect if you have a male Great Dane, or if it has a gray coat, is clumsy, but also loyal, and playful.

Finally, Dreed, the name of a comic book hero. This name is the right one for dogs that are very big, strong, and confident. An ideal name for breeds like the Shar-Pei and the Tibetan Mastiff. It can also match any dog as long as they showcase similar personality traits.

If your male dog has a sturdy body, and actually its most remarkable characteristic is its strength, then you can consider the name Brick for it. It is also a wonderful red dog name, ideal for Coonhounds and brown-colored puppies!

On the contrary, if you have a female girl that has a lively personality, is energetic, joyful, and has a bright coat color, then don’t give it another thought. Choose the name Glitter! It’s beautiful, iconic, and original – making it the ideal mix. Shorten it with Glitzy.

Does your male dog love to sniff, lick, and nudge at objects to find out what they are? Or does he warn you each time he feels something suspicious? If that is the case, then Radar would be a perfect pick.

Foods and Drinks As Weird Names for a Puppy

Taco, the name of a traditional and popular Mexican dish, would suit male dogs that are small in size, yet have strong and bold bodies! Ideally with a yellow coat. Taco definitely suits a puppy Retriever! Must be changed to Burrito once they grow up to be an adult, though ;)

While Stoli, which is Russian vodka. This is a good weird dog name for dogs that have a tough appearance, and a powerful personality. We’ve also got an awesome list of Russian and Soviet dog names!

Another option is Twix, the name of a popular chocolate bar. This is the perfect name idea for female dogs that are small, have a sweet personality, and a brown or caramel coat. If you got twin dogs, then it makes a lot of sense, too!

The next one is Whisky, as an alcoholic beverage. Therefore, if you have a male dog that is an ancient breed, has a golden or brown coat, and is confident, this name is the one for it. It’s also a wonderful Scottish dog name…

Finally, the name Noodle that refers to an Italian or Chinese dish, is perfect for both female and male dogs that are skinny, flexible, large, and have curly yellow hair.

Here are several options of weird dog names for you to choose from:

Roo is a word that refers to “kangaroo”. It is a weird male dog name and a weird female dog name at the very same time. It suits an energetic, athletic, shy, but also fierce, and kind of dangerous puppy. While the name Izzy, which is the nickname for Elizabeth, is perfect for female dogs that are elegant, calm, and sensitive.

If your male dog likes music in the background and they are warm, laid back, and friendly, then you can pick the name Tex that is related to Texas. Perfect if you are native from the state if you love it!

Finally, can you guess what name the word Midge refers to? It is the nickname for Margaret. Remember that this name is for female dogs, and if they are powerful, independent, and stubborn sometimes, this will be an excellent choice.

A word of caution, though. Picking a name is a fun activity especially with weird puppy names but you do not want to be ashamed of calling your dog in public. Your final choice needs to be child-friendly, too.

We are used to hearing the same names over and over again, so this guide has tried to provide you with several original and unusual dog name ideas. Of course, these names will be difficult to forget, so focus on choosing one according to your pet’s temperament and appearance.

It will be so fascinating to read the name you chose and also the reasons that made you decide on that one. Feel free to leave a comment below!