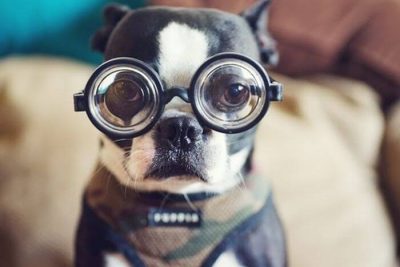 Our list of the coolest nerdy dog names and geeky names for puppies! Great options for dogs who are curious problem-solvers on four-paws!

Do you love your dog, but you also show devotion to a specific subject? Then, we have prepared for you a list of funny and geeky names for dogs! Just choose the ideal name for your little smart puppy!

Actually, being kind of nerdy is often seen as not attractive and awkward. But it is not a bad thing at all. What’s more, knowing a wide range of facts about something is kind of admirable, don’t you think so? So we’re all about nerdy dogs out here!

To make this more pleasurable for you, we have broken down this article into different categories.

If you are fond of technology or if you work in Computer Science, you will surely know terms about databases, programming, and quite a lot about this industry.

Maybe you have not noticed it, but many of the words you use daily can represent ideal names for your dog.

Let’s start with the cutest – Cookie 🍪 ! Maybe more than a million times you have had to accept a cookie approval to access a website, right? We have been influenced by all these popups. So, if you have a cute small brown-coated male or female dog, it’s a perfect match!

If you need a Chihuahua name or one for a Pomeranian, you can name it Bit since they are some of the smallest dog breeds. It will fit perfectly the meaning of bit, which is the smallest data unit. Or Byte which is “four bits”. Another good option for small intelligent dogs can be Chip, as the abbreviation of “chipset” or “microchip”.

Are you really into social media? Then, what about Emoji? If you have a cute, expressive dog, that will be a good option, too. You can also call your female dog Siri or Alexa if it is loyal, obedient, and helpful (sometimes… for Siri).

And who doesn’t know “The Cloud”? You use it every day as a source of storage for your data without even knowing it. So it would be a good idea to name your dog Cloud if it has a great memory and fluffy hair. Don’t you think it will be perfect for Poodle Mixes?

Here are some programming languages and technologies you could name a nerdy dog after:

There are hundreds of fabulous names from the tech world. Packages, modules, keywords, tech stacks, and more. Choose the one you really love using the most!

Here are several options of nerdy dog names for you to choose from:

Superheroes are always on-trend! And even more now with all the hit movies and remakes that have recently been released. Therefore, we have some ideas for the name of your dog based on such famous cartoon characters.

If you have a male dog that is speedy like a Greyhound, or dynamic like a German Shepherd, you could name it Flash, as in Flash Gordon. Wouldn’t be that precise?

And what if you have a male dog that changes its temper quickly or gets angry easily? Then, Hulk can be an option. Or maybe, Iron that stands for Iron Man if your dog is strong yet very funny and loyal.

You can also name your male dog Thor if it is full of strength, like the Siberian Husky, since it is also a Norse God.

Peter, the real name of Spiderman, is a good idea if you have an agile male dog that loves to play and be active. Definitely a good name if your puppy destroys spider webs at home, ha!

Does your dog not fit in those names? Then, what about Groot? As the cute tree-like creature from “Guardians of the Galaxy” if you have a sweet, sensitive puppy. Maybe, Harley is a good one if you have a kind of crazy, friendly female dog!

The number of people fond of the Star Wars franchise is no joke! If you are one of them, you can name your new puppy as one of your favorite Star Wars characters. And no, it doesn’t have to be Obiwan or Darth. Although the latter is a great black dog name!

So, what about Chewie, the nickname of Chewbacca, as the name of your fluffy dog that tends to bark? Due to the original character tends to get irritated.

We also have Leia as the Princess, for your female dog if it is smart and brave but also stubborn sometimes.

And have you thought about R2-D2? The iconic “astromech droid” of the franchise. This name can be the one for dogs that prefer being outdoors and are smart and friendly. If you get two similar-looking dogs, one could be R2 and the other D2.

We finally have Solo after the name of a Star Wars protagonists. It’s a geeky name for male dogs that are independent and reluctant toward strangers! Especially if after adequate socialization, they can actually be very loyal and lovely.

There are hundreds of great TV programs and series! They can all offer a wide variety of geeky name ideas for your new puppy.

If you have kids at home, then you will know Finn, the character from Adventure Time. This name can be perfect for male dogs that have no fear and love to wander off, such as Beagles or Cairn Terriers.

Bones is the name of a crime TV series and it actually sounds like a cute name, right? You can give it to small skinny male dogs, so it matches the name.

And what about Cooper? The last name of the genius theoretical physicist in “The Big Bang Theory”. Talk about a geek and nerd! You can use it to call your smart yet stubborn and funny male dog. To give you some examples, breeds such as the Golden Retriever and the Shetland Sheepdog fit perfectly in that description.

Do you remember Scooby-Doo? Who doesn’t, right? Maybe, naming your Great Dane Scooby will fit perfectly. Or you can just give it to a jovial, playful male dog.

If you studied hard this course during school or you just enjoy knowing topics about this subject, then you will love the options we have for you.

The first one is Ion, which refers to an electrically charged atom or group of them. So if you give it to your energetic tiny dog, it will be the cutest thing ever. And it’s super short and memorable.

On the other hand, if you have a strong-looking dog that has a sturdy body and any silver coloring coat, Titanium will be the perfect name. We bet you can imagine calling an Alaskan Malamute or a Husky that way. It’s somewhat of an Alaskan-type of dog names.

Picking a Geeky Name for a Smart Puppy

Perhaps if you really enjoy watching anime, Goku or Akira could be great names to call your dog. Or if you know about the old culture of Greece, Beta or Alpha could be the ones you were looking for.

There are billions and billions of people in the World and each one of us likes different things. Therefore, we hope that through this guide we have helped you to pick the name that best suits your dog based on its personality.

Let us know in the comments which one you love the most and why! We would be happy to read more!