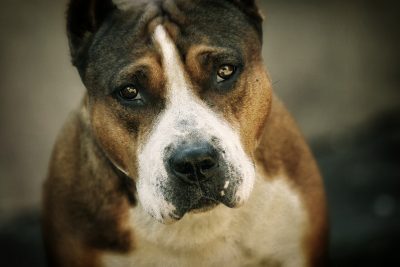 Our list of the best badass dog names for your new tough-looking puppy! These are intimidating names to give to menacing and scary breeds. However, be careful not to reinforce stereotypes too much, especially when it comes to dangerous dog breeds.

Is your four-legged friend troublesome? Or, on the other hand, is it very skillful? If your pet has any impressive badass-esque characteristics, then you have found the right place to look for the perfect name for it.

In addition to the meaning of badass that you already know, this term is also used to describe something that you find impressive. That is why we have made a long list of the most badass dog names.

To make it easier for you, we have organized these names into various categories. So, go ahead and take a look at them!

The first name idea we have prepared is Amir. This word means “powerful” in Hebrew and it will be perfect for male dogs that have extreme physical capabilities. Great for a Black GSD or Siberian Husky.

Another recommendation for male dogs is Brendan which means “brave” in Gaelic. So, it will be perfect for dogs that are fearless and protect you from situations that can be dangerous. This is a name suited to threatening and intimating watchdogs and guard dogs.

And what if you have a stubborn and independent female dog? Then, a good option for it can be Nikita, which means “unconquerable” in Russian. We’ve got plenty more Soviet dog names here!

Here are several options of badass dog names for you to choose from:

A good name for male dogs that have high levels of energy and that can turn aggressive sometimes is Fire, or Faya to play with it.

And what if you have a male dog who gets immediately identified by its large size? Then, Colossus would be a badass name for this dog. Dogs such as Great Danes and Dogues de Bordeaux are good examples of breeds than are way bigger than the average.

Moving on, Rebel is the perfect name for dogs that are not that obedient. You know, the ones who tend never quite listen to you! it might be due to a lack of early training or it may simply be part of their distracted nature.

Maybe you want your dog to participate in shows and you expect it to win them all? Our dogs are always the most skilled and the smartest, right? If that is the case, then King is the name for it. And your yard or balcony or living room can be their Kingdom!

On the contrary, if you have a female dog that is clever but that can be not that friendly and even ferocious sometimes. Then, you can keep in mind the name Widow.

The first badass dog name idea we have for you is Thor. If you have a male dog that has a strong lean muscular body, you can choose that one. You know, the kind of dogs that enjoy protein shakes!

You can also name Samson your male dog known for its fighting spirit and unmatched strength. Speaking of Fighting Spirit, the anime this time, go with the main protagonist’s name, Ippo.

On the other hand, if you have a female dog you can name it Maia, after the daughter of Atlas. Especially if it is large in size and has a protective nature. Another alternative is Hera, as the Greek goddess, if your pet loves to be the center of attention and it has a powerful temperament. If you really love Greek words, check out our list of cool Greek names for pups!

Atlas, the name of the titan condemned to hold up the weight of the heavens on his shoulders, can be a good name for courageous male dogs that are strong physically and participate in shows. Titan itself is a badass name for threatening dogs!

Another good alternative is Ajax, which is the name of a hero in Greek mythology. If you want a powerful name that can fit perfectly your extremely strong and fearless male dog, then this is the magical one.

Do you remember the blue-skinned mutant from X-Men that was a shapeshifter capable of impersonating anyone? Her name was Mystique. That name can be the one for a dedicated yet adaptable female dog. Mystique fitted in any kind of situation but she was also suspicious towards strangers.

Then we have the name Rocky from the iconic film series. You must know the character, so if you have a dog that is determined, smart, and brave with amazing physical capacities, this is the ideal name for it. A top name for renegades like American Bullies, Am Staffs, and Bull Terriers.

Another character played by Sylvester Stallone is the famous Rambo. So, that name can suit very well your male dog if it has a protective nature and is highly skilled. Therefore, a perfect name for dogs attending trials and Schutzhund competitions to show their abilities! Great German Shepherd name or even for a Shiba Inu or Samoyed.

Quinn, the name of the fictional character from Suicide Squad, can be perfect for female puppies that are known to be friendly and bubbly, but smart and fearless at the same time.

If you are a fan of Game of Thrones, then decide on Daenerys as the name for your female dog that is small yet lionhearted, valiant, and loyal. While Hulk can be a funny name to give a small male dog that has a mad temperament despite its tiny size. Hulk would be a fun Chihuahua badass name!

Do you have a tough male puppy whose appearance is intimidating? Perhaps they have a fierce nature. Then a badass name would be Bonney. Maybe you don’t know what person that is, but we are referring to the last name of Billy The Kid, the well-known outlaw and gunfighter of the American Old West.

We also have the name, Borden. This is the last name of the American woman known as the “Axe murderer”. You can give it to aggressive and tough-looking dogs. Maybe if you don’t know the meaning behind these names, they don’t give you a bad feeling. But since you know them now, they sound frightening, right? At least people won’t panic if you call your name loudly in a crowd!

Finally, what do you think about Capone – the infamous American gangster who dominated organized crime in Chicago from 1925 to 1931? This is a name that everybody knows. So if you want your pup to attract everyone’s attention, Capone is a good gangster name for dogs.

Certainly, al these badass dog names are pretty scary. Especially knowing who or what they are originating from. But do they actually fit your dog’s appearance and demeanor?

We hoped that we have been able to provide you with original badass name ideas for your bad boy or bad girl of a dog! We have tried to cover everything, from dogs with tough and strong looks to those that are able to complete heavy tasks and are appreciated for that.

So the only thing that’s left, is to choose the ones that convinced you the most and find the best among them.

If you succeed in that, then let us know in the comments section which name you believe is the most suitable for your pet and the reasons why. We are always excited to read your responses!

And take a few minutes to look at all of our other cool dog names!