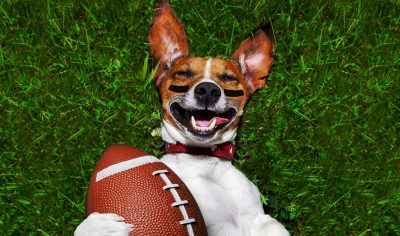 Are you a sports fan or do you have an athletic and sporty puppy who loves exercising? Then our list of sports-inspired dog names will be ideal for you. Since it is such a broad and rich area, we have added dozens of cool suggestions.

We have dozens of other categorized puppy names so check them out!

We have taken inspiration from different sports, famous athletes, cool nicknames and even special equipment for specific sports.

Therefore, from this short intro, you can see that you will find the name that truly represents your puppy. We are also going to help you to find a name that identifies its personality, worry not. Just keep reading to find out everything we have in store for you!

Names Inspired by the Olympics

The Olympic Games is the most important international multi-sport event in the world. Therefore, it serves as an extraordinary source of names for dogs. You will find some of our best recommendations below, along with suggestions based on the breed of your pet.

If you have a dog that loves swimming, or if you love the sport yourself, then you could name it Phelps, like Michael Phelps, the famous Olympic swimmer. This name will fit certain breeds better than others, and some of them are the Portuguese water dog, Irish Setter, and the Irish Water Spaniel.

For the fans of skiing, here you have an excellent suggestion, Lindsey, a name in honor of the famous and talented Olympic skier. Like our previous example, this suggestion will be better for certain breeds such as the Vizsla and the Australian Cattledog, which are amazing companions for skiing.

Here are several options of sports-inspired dog names for you to choose from:

For the fans of boxing, Boxer dogs, and people who have practiced the sport in the past, this list of ideas will come in handy. Furthermore, they will help you to highlight the braveness and strength of your pet.

You could name your dog Ali, in honor of Muhammad Ali, one of the best boxers in history. Bonus points if your dog is especially big and strong because it will fit the name even better. It is an even better choice if your dog is graceful as well because you only have to remember how Muhammad Ali used to move in the ring.

Another wonderful suggestion would be Tyson, in honor of Mike Tyson, one of the strongest and more feared boxers in history. His name is a legend and is synonymous with strength, power, fearless and decisive. If you want to highlight such traits in your dog, then go for it by all means. A good name for weight-pulling dogs, too!

Basket is one of the most famous sports in the world, and therefore, it is full of iconic people, and hence it is also an excellent source of names.

We will start with one of the most iconic names, Jordan. As you can easily guess, Michael Jordan, an absolute basket legend, inspires it. We like it because its meaning is excellent, and in addition, it is short and distinctive.

Another excellent idea would be Kobe, as in Kobe Bryant. He is another legend in basketball. If you are a fan of the Lakers, then it makes even more sense to name your dog like that. You can rest assured that it will outstand from the rest. Furthermore, as it is short, it will be easy to remember and internalize.

Since we have so many legends in basketball, let us show you another suggestion, Shaq. Shaquille O’Neal inspires it, and we suggest it because he is one of the best players in NBA history. On top of that, the name is short, sounds cool and is easy to remember.

Are you looking for a short sporty puppy name for a male? Tennis is another huge field in the world of sports. Therefore, we also used it to gather several ideas, some of which you will find below.

Then you could opt for Rafa, as in Rafael Nadal. He is one of the greatest stars in tennis, and therefore, it is a good choice. Bonus points if your dog is very athletic and agile because it will fit the mold perfectly. Since it is short and original, it will make your pet sound even more special.

Do you have a female puppy? No worries, because you could call it Pova, as in Maria Sharapova, another icon in tennis. Bonus points if your dog is Russian because it will make even more sense to name it that way. We recommend this name because it is short and feminine.

Finally, you could also opt for Serena, as in Serena Williams, which is another female star in the world of tennis. Similar to our previous suggestion, we like it because it is short, which is essential to make a good dog name for an athletic dog.

Now that you have our specific recommendations in addition to our list of sport dog names, it will be much easier for you to find the perfect name for your pet. Since we have even suggested ideas based on the breed of your puppy, you will have an even easier job.

As in our other guides, we recommend you to take the time to examine each sport-infused name perfectly. Since we allow you to filter it by gender, you can elaborate a list of your favorite names, so you can compare the different options and arrive at your best pick.