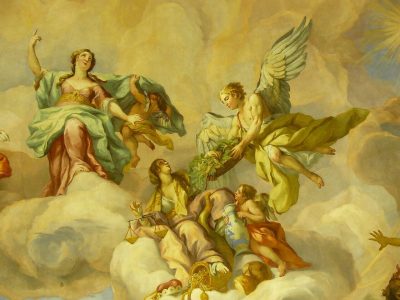 Does religion play an important role in your life? Do you want some inspiration from a list of biblical dog names? If the answer is yes, and you have a new puppy coming to your family, you must give it a name based on your beliefs.

Therefore, we have prepared this guide especially for people like you who want some dog name ideas based on Biblical stories, for example.

We have made a research and came out with a comprehensive list of biblical names for dogs for you to take ideas from.

We have also taken some names to organize them into categories so you can have a better view and select one directly from the one you prefer.

If you enjoy ancient dog breeds and names, you may want to look at our Greek puppy name list, and also Latin dog names.

The first name idea we have for you is David. He was a shepherd and the one who killed Goliath before becoming the King of the United Monarchy of Israel and Judah. So, if you have a male dog that is strong yet very loyal and it has great charisma, then that is the perfect name for it.

Jacob was the father of the twelve tribes of Israel. This name can be a great option if you have a calm yet, caring and smart, male dog.

We cannot forget about the names of the first man and woman that inhabited the earth, Adam and Eve. You can give the first one to your male dog and the second one, obviously, to your female dog. Even more so, if they don’t listen to you and spend most of the time in their world, just playing around. Just make sure they do not eat from that forbidden tree in your garden!

You can also give your companion male dog the name Moses if he always listens to your commands, he is intelligent and at the same time, brave. Since we all know, Moses received the Ten Commandments and led the Israelites out of Egypt to the “Promised Land”.

Another Biblical dog name is Cyrus. This name refers to a Persian prince that was considered as anointed by God. Therefore, if your male dog is courageous or if it participates in shows and always gets good results, this is a good alternative to keep in mind.

Here are several options of biblical dog names for you to choose from:

Easter refers to the holiday that commemorates the resurrection of Jesus from the dead. It sounds like a good name to give a bright and loyal puppy that brings happiness and peace to your life.

Of course, we cannot forget about Mary, the mother of Jesus. This name carries a very pure essence; therefore, you can give it to female puppies that are obedient, loyal, and brave (e.g. Rottweilers).

Mathew was one of twelve apostles of Jesus, he was greedy at first because he was a tax collector, but he changed after following Jesus.

That is why that Biblical name fits perfectly male dogs that don’t seem to be that friendly due to their appearance, but their personality makes them unique.

Another pretty name is Gabriel, the archangel who brought Mary the news that she would become pregnant and give birth to Jesus.

That name will be perfect for male dogs that love cuddling up by your side or for those that have a protective nature and always let you know if they see something suspicious.

Aaron sounds like a powerful and masculine name for your dog. It means teacher or mentor in Hebrew and it will match this name perfectly if it is smart andis able to perform heavy tasks.

The next option is Caleb. Can you imagine what this word means in Hebrew and Arabic? It means “dog” – yes, as simple as that! So, if you have a male dog and you choose this name, it would be like to call it by what it is but in a nicer and melodic way, right?

Then, we have the name Ethan, which means strong in Hebrew, once again. Therefore, you can give it to your male dog if it has a muscular body and extreme physical abilities, as the word stands for.

Nevertheless, don’t worry because we also have name ideas in case you have a female dog.

Faith means to trust in Latin. So, if your dog is very affectionate, loyal and innocent at the same time, this is the name for it.

We also believe that Grace is a good option for dogs that are loveable and caring. So, if your pet has those characteristics, give it this beautiful and elegant name. Plus, this word has a magnificent meaning: favor of God, kindness, and mercy.

And finally, we have Naomi that sounds good for a female puppy if it is obedient, gets along with other pets and people, is outgoing and loving. This is because that name means “pleasantness” in Hebrew.

Eden refers to the “Garden of God”, also called “Paradise”. That was the place that God created to be inhabited by his first human creation, it was bright and beautiful. So, if your female puppy loves being outdoors, running on the grass and it has a happy and bubbly personality, this is a good name for it.

Another good name could be Israel. That was the land that God used to further his plan of redemption for the human race and of course, many important events took place there. Therefore, if you love your puppy and want to give it a name with a super special meaning. Then, this is one of the best alternatives.

As we know, The Holy Bible always encourages us to stick to the path and maximize our best qualities.

Therefore, we hope that through the Biblical names for dogs we have selected for you, you have been able to visualize the best traits of your dog and choose the one that best matches it. We have dozens of other dog name categories if you still need more options.

Since the main purpose of this guide is for you to choose the perfect name for your pup, we would be excited to read in the comments section which one you chose and why.

We expect many of your responses! See you next time!