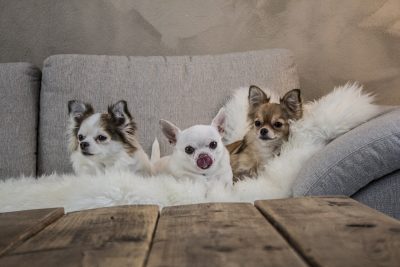 Are you looking for a simple pet name that can describe perfectly the kind of dog that you have? That is a smart choice since sometimes, using just a one-syllable word as a name for your dog can allow people to always remember it.

So, we have made a compilation of the best one-syllable dog names sorted into meaningful categories that will work perfectly for your dog according to their traits. If you want a short but meaningful name for your puppy, then keep reading this article.

Some people are really fond of movies and series, so why don’t you name your dog with something related to that?

For strong-looking dogs, Darth, which stands for “Darth Vader”, the lead villain in Star Wars, can be a suitable option. It’s an even better name for black dogs, too! But bear in mind, that this name may scare some people away. So, what about other options such as Buzz, which stands for “Buzz Lightyear”, the comical character from Toy Story?

Other good options for a small dog that can bark kind of loud and get angry easily, like the Chihuahua or the Beagle, are Hulk and Kong, to give it a funny connotation. Don’t you think so?

Here are several options of one-syllable dog names for you to choose from:

For male dogs, for instance, in breeds such as the Bichon Frise or the Havanese, which are known to have fluffy coats, you can give them the one-syllable boy dog name of Cloud. Isn’t that perfect?

Maybe for dogs with a friendly, easy-going personality, Breeze is the name that would best suit them.

Rose can be a good option for female puppies that have delicate looks like the flower. And for small curly-haired dog breeds such as the Bolognese, or the Pumi, the best name can be Bush. A great fluffy dog name!

If your dog’s most outstanding characteristic is its size, then you can name it based on that.

For example, for small breeds such as the Brussels Griffon or the Chihuahua, names like Pearl or Speck may be the ones for them. On the other hand, for dogs that are known to be heavier, such as the Great Dane or Saint Bernard, the name Biggs can be a good one. Looking for a Rottie dog name? What about Buff? Check out our list of names for big puppies!

What is more, for small heavy dogs, such as Pugs, Frenchies, or Shar-Peis, you can give them the name of Buns which are sweet bread-based rolls. We also have dogs that are known to be skinny, such as the Ibizan Hound or the Greyhound, so for them, we have names like Bones, Stick, or Blaine, which all relate to thinness.

French is a very beautiful language, so a single word may be enough to showcase elegant meaning. So, for female dogs with gentle looks and a sweet personality, these tiny female puppy names are amazing:

What if you have Arabic roots and you want to name your dog in a way that reminds you of your culture? You can name it Al, which means “from the family” in Arabic. Look at our list of exotic puppy names, there are plenty of single-syllable names!

But do not worry, because we have more names that are from other origins. For example, Drew, that means “strong” in Greek or Ike that stands for “laughter” in Hebrew. You also have Kai which means ocean in Japanese. There are plenty of options.

There are some dog breeds in history that enjoyed very regal lives and that they were the favorites of nobility for a very long time and even now.

So, for female puppies of breeds such as the Pekingese, the Shih Tzu, or the Japanese Chin, they will love to be called Queen due to their ancient roots. These are also wonderful one-syllable girl dog names:

On the contrary, for male dogs of breeds such as the Pembroke Welsh Corgi or the Saluki, we have names like King, Duke, Vic, and Prince. Who knows, maybe, they will start acting like them, so be wary of pampering them too much.

We have plenty of other dog names inspired by monarchs and princesses!

There are dogs that are very playful and always make you smile. For these dogs, we believe the most suitable name is Joy or Joie in French. Or Yay for a simpler yet more expressive sound!

What if you have a very affectionate and lovely dog? Don’t you think that Smooch which means “to kiss and cuddle” can be a great short puppy name?

Maybe Pop is a good option if your dog always appears out of nowhere enthusiastically. But what better name than Charm for a female puppy that people always fall in love with. Whereas Brave is perfect for a courageous male guard dog.

Have you noticed that your dog has sad eyes? This is not a bad feature; it is actually something really good since it means it is trying to empathize with human emotions by its facial expression. You can name these kinds of dogs, such as Cocker Spaniels, Blues since it means “sadness”.

There are short words that once heard, your mind starts relating to her powerful message.

So, if you name a dog breed such as the Rottweiler or the Bullmastiff, which are known to be excellent guard dogs, Champ, which is the abbreviation for “champion”, or Dean, which stands for “leader”, they surely, will leave that kind of impression on people.

You can also opt for names like Ace or Blaze if your dog is really smart and protective.

As we have seen, it does not matter if you have a small or big, strong or delicate-looking dog, there are plenty of options to call them by a sweet short name.

They do not need to be long names with too many sounds to be best. Just a simple unique sound can say so much about your pet and its personality.

Also, it will be way easier to call it in the future and for people to remember. So it’s a sure bet to go ahead and go for any of the names we’ve recommended to you – because they sound cool! They’re easy to remember and can adapt to any dog, as you have seen in our recommendations.