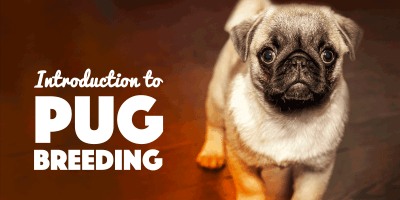 Breeding pugs is no easy mission. Sure, they are loved by many but the breed is a difficult one to work with and it is time for pug breeders to better the breed at every generation. So we’ve asked Anita Wright from the Pug Club Of South Australia, for some advice on how to breed pugs the right way; and what to be on the lookout for.

The common response when the Pug dog breed is mentioned will bring forth uncomplimentary comments. Pugs snore, they are fat, and so on. So in this article, I will attempt to explain a few things which you may not know or understand about the pug breed.

The Pug is a member of the Toy Group of dogs, so it must be remembered he should never be overweight — the body can’t bear that extra weight without causing structural damages.

Due to his appearance, he is described as Multum In Parvo or Much In Little. Heredity and selective breeding have over many centuries given us this good-natured, intelligent, loyal, lazy, family-loving dog with the well recognized flat face which is responsible for the familiar “Rattle” as he breaths, especially during sustained heavy exercise.

Because the pug does not have the normal foreface of the average canine, it has everything that got “pushed back”. The nose, pinched nostrils and roof of the mouth create an “overhang” of the soft palate which interferes with the airway right at the back of the roof of the mouth. This is why we have such a loud rattle heard on heavy exercise, excitement and playtimes. These things can be alleviated to some degree, by well-informed breeding methods together with a pinch of good luck.

The pug is also loved for its unique beautiful eyes. They are not bulging, and should not. They simply fill the eye socket giving them softness and melting look nobody can resist.

All of this sits within a large broad head, almost square in shape, which is well-wrinkled and extremely expressive. The Fawn Pugs have a black facial mask while the Black Pug is simply black all over.

It is very important that breeders are aware of what they breed to what. Good breeders always make informed decisions on which dog and bitch they mate together. You don’t just breed two champions because they are champions, breeding partners, especially in Pugs, need to complement each other.

A good pug breeder will mate pugs who display good points that will improve the next generation. For example:

All of this should be topped off by the desired Double Curled Tail, which sits atop his back. Double Curl is Perfection.

As all canines have differing breed-specific problems, it is important to realize that Pugs are not perfect and get their fair share of pug-specific medical conditions. Apart from breathing problems, it is a fact they can and sometimes do suffer from Hemivertebra.

Hemivertebra — A Medical Condition Pug Breeders Should Focus On Breeding Out

Hemivertebra is an interference or incomplete connection of the spinal column. It is a focus point for anybody involved in the breeding of pugs.

This is an inherent disability in the Pug Breed that does not show up immediately but commonly appears from young adults onwards. Hemi Vertebrae becomes visible to their owners by the dog’s rear movement. Usually, affected dogs are losing their balance, and their rear legs give way to a collapsing action which gets progressively worse.

There is no cure but support can be given to the dog as sometimes seen with an affected dog having a set of wheels fastened to their rear end, to help them move around. As Nature always rules, breeders are also “victims”, as several litters can be bred without incident and then one pup may be found to be affected, several years later. Senior Pugs may also display poor rear action.

Hemivertebra may simply be age-related (eg. Slipping Patellas / Knee Caps) with the bones are simply worn due to the old age. All of this is a reminder to owners and breeders to be aware of allowing dogs to fall into obesity, or permitting young pups to jump up and down furniture, beds, etc. At first, it does look like nothing, but over the years all of these cause such a painful affliction.

Pups born with Patella Luxation can and will inherit it through either one or both parents, it is important breeders learn to recognize that they should have good knowledge of parents, grandparents and previous dogs on the pedigree, as this complaint is well known and identified. Performing health checks yourself as a breeder is vital; so is encouraging other breeders perhaps less “in the know” than you to clear their pug breeding stock from all known medical conditions.

As Pugs are very inquisitive and curious dogs, they will often damage an eye, simply by investigating the garden. Rose bushes are best planted where Pugs cannot reach to avoid accidents.

Over the last years, pugs have inherited a not-so-great reputation because many have seen pugs breathing loudly, moving slowly, being clearly overweight, etc. Anita Wright has been generous and we hope her valuable pieces of advice will help you breed better pugs.

As soon as you decide that you want to breed pugs, you must start by not breeding at all. Instead, you want to open a new spreadsheet and list influential experts in the pug world and email them personally to ask all the questions you have. Not all of them will reply but at least, those who do will help you move the needle forward.

Want to go ahead with pug breeding? Don’t just start looking for a pug to stud with your bitch or a new puppy pug yet. Read, go to dog shows, speak to established pug breeders and judges to know what should you be focusing on. Knowledge matters, especially with such a breed that is at a turning point in its existence.

Anita bought her first show dog, a Chihuahua, in 1974. She still breeds them while Pugs are her second breed (since 1976.) Along the way, Anita became a Judge, licensed to Judge Group 1 Toys, Group 2 Terriers & Group 4 Hounds.

She has also been Secretary of several All Breeds Clubs, and is a life member of the Chihuahua Club of South Australia, with over 17 years as Secretary and currently the Vice President and Life Member.

Currently Secretary and Life Member of The Pug Club of South Australia as well as the Chihuahua Club of South Australia; a position she will retire from in August. Over the years, Anita Wright has lectured on a number of breeds to trainee judges and has also written articles on various subjects within the canine world.