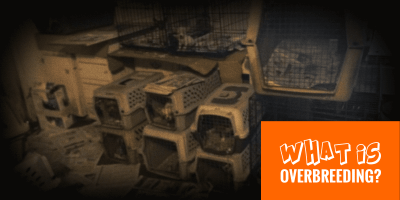 Overbreeding dogs is the process leading to excess breeding of dogs; a single dog can be overbred, or a breeder can overbreed in general. It is a growing concern in modern dog breeding, generally motivated by unethical breeders having dubious financial goals.

The rule of thumb is very simple when it comes to breeding dogs ethically: a dog breeder should never ever breed more dogs than you can properly control, lovingly sell, and responsibly care for. It is hard for a single breeder to care for three litters of puppies at a time

The definition of overbreeding is twofold depending on whether the subject is a dog or the breeder. If a dog breeder overbreeds, he or she plans and organizes more matings between his or her stock than he or she should. If a dog overbreeds, he or she mates too often and more than he or she should. With a breeder overbreeding, it may be many dogs that get overbred whereas when we are talking about a single dog being overbred, the situation is clearer.

The problem with dog overbreeding is not just about the very high frequency of litters for a given dog; such back-to-back breeding could even be healthier for the female dog for example. The problems are rather in everything else that is implied when we use the word overbreeding — e.g. poor hygiene conditions, motivations of the breeder to breed so often, popular sire effect, etc.

Overbreeding a dog is the process of mating it more than it should.

However, this is rather vague and unspecific. Given a specific dog, it is very difficult to say what number of litter it would be considered overbreeding. Because the definition of the word states a concept or an idea rather than a precise measure or methodology, it is up to a person’s interpretation to say whether or not a dog or a breeder is overbreeding.

For a dog, things can get a little clearer thanks to some guidelines given by registration schemes or kennel clubs (e.g. American Kennel Club, UKC, etc.) For example, the United Kennel Club says on their website that it “questions any litters bred by a male over 12 years of age” and also “questions any litters bred by a female over 10 years of age.”

Plus, we all know that a female dog should never be bred during her first (at least) couple of heat cycles so her body matures fully to support a healthy pregnancy. We wrote a full article on this. Somewhat similar for male dogs, indeed capable of impregnating a bitch from around 6 to 8 years old, but are recommended to wait for at least a year of age before their first breeding. This is to make sure the stud’s sperm is vital, and his fertility high.

Anything in between these sex-specific ceiling and roof is pretty much up to the breeder and would not be considered as a bad practice of dog breeding by most organizations’ playbook. Now, because we are humane and responsible, we know that breeding a female dog from 2 years old all the way to her 8 years of life would not be healthy, despite being fine by most organizations.

Overbreeding a dog means breeding a female or male dog:

If you are wondering why is over breeding bad, the previous three points make it clear. Overbreeding is bad because it puts a female dog’s body in danger. Indeed, nursing a litter of puppies is tiring, let alone several in a row without a year to rest.

But more than the dog itself, over-breeding does also affect the breed these overbred dogs belong to. Let me explain. A breeder has a simple mission: improving the breed he or she is working with. This means making sure all health checks have been done but also means waiting for puppies to grow after a first or second litter for example. Seeing what needs to be improved so, as a responsible breeder, you can find a more suitable stud for the next breeding. When you overbreed, you do not give yourself that feedback because you are rushing to get to the next litter, and the next one, and the one after, etc. Therefore, any defect would keep on being passed on, decreasing the overall quality of the breed (or the bloodline.)

We have written an article detailing the three main high-level strategies a dog breeder could follow in order to come close to profitability in dog breeding: spend less, breed more, or breed better. Overbreeders generally spend less and breed more just to generate even more income with their kennels; forgetting about the welfare of their dogs along the way.

Overbreeding one or many dogs is detrimental to them, to the breed, to the bloodline, and the only beneficiary of such an unethical practice is the breeder’s bank account. The only situation where overbreeding would be recommended despite these considerations is to revive a dying breed or population of dogs at all costs.

Scaling up a kennel requires a lot more of everything a breeder does and has:

A large-scale kennel’s operations can be operated very responsibly (many working dog breeders do it the right way.) However, it is indeed extremely more difficult to properly look after and care for several dogs than it is with just one at home. It is not impossible, though. In many instances, large-scale kennels can be seen cutting corners, and whether they are doing it intentionally or not is hard to say.

Bottom line, not all large-scale dog breeders are overbreeding; they may be breeding a lot, but have the means to properly deal with these sorts of numbers. Let’s not be naive either: many large-scale kennels do practice overbreeding and cut corners to spend less and generate more income.

How To Report an Overbreeder?

In a previous article, we explained why backyard dog breeding cannot be criminalized and the main reasons are that incompetence cannot be outlawed, only animal abuse is. Therefore, the full force of the law will not be able to sanction a breeder you deem as irresponsible or unethical.

However, you have other ways to report an overbreeder and these include reporting the said bad breeder to:

Reporting bad breeder is a duty but do not overdo it either: accept that people may see a situation differently than you do. A lot of people judge some breeders as awful but are themselves judges as unethical breeders by others, and it goes on and on. To many, good breeders are those who never breed.

There are important considerations when you go ahead with reporting an unethical breeder: you have to build a case while respecting the law yourself. Do not take unauthorized photographs or videos. Do not enter somebody’s property without being allowed in. And obviously, be aware and careful for your own safety.