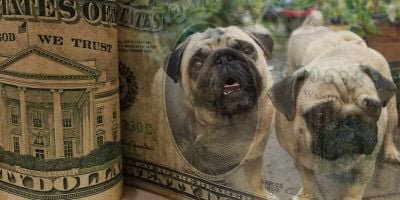 Before somebody gets involved with breeding dogs, they tend to do their research in order to assess a rough estimate of how much does running a kennel cost. Indeed, dog breeding and being a dog breeder comes with a price. Now, not everybody runs their kennel the same way, some people can afford huge expenditures while other ones are more frugal.

Remember, breeding dogs means that you are committed to the breed in the long run. Whether dog breeding is profitable or not depends on how you run your kennel and how much reputation you have built. There is money in dog breeding for those who reach excellence.

Now you’ve looked at the summary to get an idea of what dog breeding entails financially, here is a more detailed report on how much does it cost to be a dog breeder.

Yearly Expenses (Not Related to the Breeding)

This is how much does it cost to run a kennel.

Maintenance of a single dog will on average costs $1,000 a year. The grand sum of yearly expenses due to being a professional breeder varies with the size of the kennel. The number of dogs and the requirements for dog housing can be a significant investment. Dog food, vet visits, annual license fees, cleaning supplies, stud service fees, fur and nail care, will always be in that expense column.

In addition, the cost of operating a large kennel will always include the overhead and maintenance of the building and the rent or mortgage on the property. At least initially, most commercial dog breeds breed from their own homes, and so rent/mortgage on any kennel property is not included in this analysis. Some home expenses may fall into the category of an expense for the business (e.g. home office) but these, too, are excluded.

A pre-license inspection of the kennel may result in additional cost of upgrades, etc. In addition, each individual state may have an animal act of its own that will add to the requirements and cost of keeping the business legal. These license requirements on the low end will cost $30 (just federal with no state fee) to $1,250 (maximum federal fee of $750 operating in Michigan.) The federal fee is expensed here on a single litter with the assumption that a professional breeder will have four bitches.

The cost of insurance was not included in this analysis because it is usually added into the property anyway. Some breeds (e.g. Pit bulls, American Bullies, Rottweilers) may increase the cost of property insurance, and rightfully should be expensed. Health insurance for dogs is a debatable needed expense and is, also, not included. A successful business will save additional cash for unexpected or catastrophic expenses (e.g. cancer treatment.)

Breeding-specific expenses are going to first include a stud fee — the stud fee is usually the cost of a single puppy from that breeding. Rarely is it more than that unless you are breeding your bitch to a popular sire. Some breeders will look for a stud that comes from championship bloodlines. The stud fee of a dog that just won Westminster’s Best in Show will run in the (tens of) thousands of dollars. The vast majority of breeders do not pay this kind of money.

Travel expenses to the stud or for the stud’s owner to the dam may make the cost so prohibitive that artificial insemination is a cheaper and better option. Fresh or frozen, the stud will cost on average $500. For some breeds like English Bulldogs, it may be double. Make sure you are drafting a clear stud-service contract that both parties agree on and get protected by.

Other expenses pre-puppy will include the bitch’s progesterone tests (a single one is $100) to determine her ovulation timeline and the best breeding time. Additionally, you’ll have to book an ultrasound or xray (depending on gestation date) to confirm the pregnancy. It goes without saying that during the pregnancy and the nursing, your female dog will require additional food or supplements. These additional expenses will average $200.

A test for Brucellosis, a contagious disease, should also be done prior to breeding. This testing averages $100. The stud should provide proof of testing before the stud agreement is signed.

Breeds that have many known health problems and genetic diseases should also obtain health clearances prior to breeding. The Orthopedic Foundation provides good information on this subject. This fee will include an examination by a vet for any hip issues, and a genetic test for eyes diseases, cardiac and deafness. The vet fee may be included as part of the regular exam, but generally requires a separate office visit for the purpose. Some vets will do the necessary paperwork to obtain the clearance without an additional charge.

The total in fees to OFA and vet runs to about $100. The genetic testing will cost $15 plus $7.50 for test of three genetic conditions (total cost $37.50.) This is a one time fee and can be expensed on a single litter or spread out over the cost of multiple litters of the bitch. The stud selected needs to have those clearances and documentation should be provided prior to accepting the stud.

A well-known and inevitable litter-related expense is the whelping box. This expense can be as cheap as a cardboard box around the house (i.e. free) to the most high quality purchased from a pet supply store or online (over $500.) The average whelping box should be built with a rail to protect the puppies from being crushed by the dam.

Some breeders build their own box, and the cost of those supplies runs around $150. The whelping box is a cost that will be used for this dam and maybe for others. In this article, it is expensed as a one and only litter. This kind of fixed expense can be depreciated over many years (as will the purchase price of any bitch bought for breeding purposes.)

Along with the whelping box you should have a comprehensive whelping kit ready a week or two before the litter’s due date. It should include everything you may need to assist the mother at delivery and over the following weeks to nurse the puppies.

The birth of the puppies does not usually involve extra expenses as long as the breed is not one that requires C-section births. C-section births are an additional vet surgical fee. Breeding one of the breeds that require a C-section will add a cost anywhere between $1000 to $4000 (for an English Bulldog.)

C-section births, otherwise, fall into that unexpected additional expense that is part of the business expense overall. It is not included in this analysis because it is usually not needed.

Mind that such emergencies don’t just sum themselves up to the price of the surgery alone. You must consider the surgery, as well as the observation, medication, anesthetic and overnight stay at the vet.

The arrival of the puppies brings another set of expenses. Puppies need to be dewormed at 2, 4, and 6 weeks. The deworming medicine costs on average $35 for a litter of six puppies of a medium size-large breed. Of course, bigger puppies and a larger litter will increase the need for the medicine and its cost (toy breeds may even get by with less.)

Similarly, at least two sets of puppy shots will be needed before going to their new homes. Many vets will have a standard charge for litters based on the number of puppies. In general, the first round of puppy shots at age six weeks will cost with vet check $200.

Other necessary expenses include such things as AKC registration of the litter ($25 plus $2 per puppy), supplies, and a bag of puppy food (total average $100). Some breeds require some puppy surgeries like dew claw removal, and this expense is not included here.

Also, surgeries like tail docking and ear cropping sometimes commonly seen in certain breeds are not a necessary expense and are excluded.

Puppies that are unfortunately born with some severe health defect will incur special health expenses. A puppy with a severe defect or health problem may even have to be euthanized. A single euthanization costs on average $50.

Sometimes, even the most careful breeder that has all the genetic tests available done and has looked at the bloodlines of the stud for several generations may end up with a puppy with some obvious disqualifying characteristics. Most professional dog breeders are breeding to the standards. The goal is to continue the perfection of a breed. The question then becomes what to do with a puppy that has a genetic problem. It is usually good policy to offer this puppy for sale at a reduced price which may, in fact, mean taking a loss on that puppy.

A true professional breeder will, also, insist on an agreement with the buyer that the puppy will not be used for breeding purposes. The cost of neuter or spay is sometimes seen on the expense side of the professional dog breeder but seems more logically an expense for the buyer since the breeder has already reduced the price.

Finally, a successful professional dog breeder will recognize all the expenses of the business and be scrupulous in documenting them. Common expenses that vary too much to be quantified here includes such things as advertising and mileage. Many professional breeders spend money on posting their puppies on advertising sites, etc.

The policies of free sites like Craigslist and Facebook prohibit the sale of animals. The popularity of the breed and the breeder’s desired cost may increase the need for and then the cost of advertising. A puppy advertised online may result in a potential buyer from a long distance away. The shipping of a puppy may already be built into the price of the puppy or be an additional cost to a breeder who wants the sale. Mileage to and from the vet should also be documented and treated as an expense of the business.

Please note that most breeders that are labeled “hobby breeders” do knowingly take a loss. A single one and only litter of puppies is a large expense and rarely profitable. A commercial dog breeder only becomes profitable when successfully breeding several female dogs over a period of several years.

In other words, the average commercial dog breeder only makes money by staying committed and working hard for many years. Building your reputation is vital and it means attending dog shows, keeping your social media and website updated, as well as being active in your dog breed’s community. That way, people will not just pay for the dog, but for your kennel name, too.