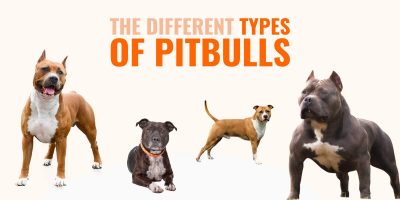 What a pit bull is and is not, as you know, is a raging debate online and offline. Ask any pit bull fancier, breeder, and owner, and you will obtain a different response each time. The pit bull emerged as a type of dogs more than a single breed – yet, there is such a breed as the American Pit Bull Terrier…

So what are the different types of pit bull dogs currently? We’ve rounded up what the community believes belong under the umbrella of pit bull breeds. Some of the last breeds are a little less accepted by the majority.

What is a Pit Bull Exactly?

A pitbull is a name given to the type of dogs, descended from bulldogs and terriers. There is some confusion regarding what a Pit Bull exactly is, and whether it is at all a breed or not. Pit Bulls are indeed among the most misidentified and misunderstood breeds of dogs. Pit Bulls can be purebred or mixed dogs, containing bulldog-type dogs and bull terrier-type dogs.

As for the physical characteristics, Pit Bulls have a stocky body with a short and broad head. They are strong, courageous and sturdy with a muscular body structure. Their coats are usually smooth, short and easy to maintain. Their neck is thick, muscular, and require pitbull collars for maximum comfort.

Pit Bulls are fast, eager and extremely intelligent. They are admired for their agility and obedience. Activities like guarding herds or watching over your property suit the Pit Bulls. Their aggressiveness is misunderstood and overrated. Rather, they can be a welcome member of your family with their people-oriented and friendly nature. Plus, each type of Pit Bull comes with their unique set of physical and mental characteristics. To keep such lean and muscular bodies, pitbull-type dogs require a specific high-protein diet and intense training and exercising plans. Make sure you invest in some pit bull-friendly dog toys, too.

However, recently, the American Bully is a breed that is growing popularly recognized as one of the most expensive Pit Bull type dog breeds. On the other hand, the mixed-breed dogs that physically resemble these breeds are labeled as Pit Bulls by shelters. Here are the types explained in details.

These dogs were traditionally raised as fighters. By nature, they are friendly, obedient and also cautious around unknown faces. However, they can also a bit naturally aggressive. To tame that hypothetical aggression, it is advisable for the owners to occasionally keep their pups surrounded by other animals and undergo a comprehension dog training course.

A blue nose pitbull is a type of pit bull, characterized by its blue colored nose and coat. Dog lovers, who are acquainted with the different types Pit Bulls and their importance, know that the blue nose pit bulls are quite rare. These dogs with blue coat and nose are extremely desired and admired. In fact, they are not just a type of pit bull but actually a cross breed of a bull and a terrier.

Apart from the distinct color associated with these dogs, the rest of the features like body structure, coat quality, aggressiveness etc. is mostly similar to those of the other types.

Again a rare and desired color in the pitbull world, the red nose pitbulls come with a red colored nose and a copper-colored coat.

The history behind these pitbulls is interesting and worth a mention. The concept of the red nose is actually related to the Irish pit bulls that were traditionally used for bull-baiting. The Irish came to the US with these red-nosed pitbulls that accompanied them. The reason for this red color of their nose is, however, not known. Owners of this particular type of pit bull must feed the dog, the best variety of fish oil available out there. This is necessary to keep their copper coat shiny and healthy. Breeding these dogs can let you get a red-nosed pup or a blue-nosed pup as well.

The American Staffordshire Terrier is yet another type of pitbull that is traditionally known to be a working dog. The breeding history of these dogs dates back to the 1970s when the Americans preferred an all-around working dog.

The average height of these dogs is 17” to 19” and their weight is 60 to 90 pounds approximately. They are the heftiest and also the tallest among the different kinds of Pit Bulls. Their drive for intensely heavy tasks and also the natural aggression is relatively less though.

Their body structure is muscular and their coat is shiny but easy to maintain. Named after a famous place in England, characteristically, these dogs are sweet and loyal and can perfectly fit into a small but active family.

The American Bully is a very popular and more recent type of pitbull breed. These dogs are the result of cross-breeding between the American Pit Bull Terrier and the English Bulldogs. The American Bully comes with immense fighting instinct and a drive for hard work, both of which are inherited from the parents.

The average height of an American Bully is 16” to 20” while its weight is proportional to its height. The American Bullies can be good family companions/members and hence, can serve as great pets at the same time. Check out our list of the most influential American Bully bloodlines.

The XL Bully dogs, drawing from their name, are the biggest varieties of American Bully dogs. A male XL bully measures about 20” to 23” while the females appear in the range of 19” to 22”.

While the basic physical traits of these dogs are similar to most other types of American Bullies, the XL Bully is more muscular, taller, way more massive and much bulkier than the others. An XL bully needs to be taken care of well, its average life expectancy is 10 to 12 years. The dogs belonging to this category have a shiny coat that is stiff and close.

Breeders and owners love the XL bully because of its excellent height and overwhelmingly huge structure. In nature, these dogs are happy, friendly and sociable. They are powerful but soft-natured. Their muscular structure often makes the children scared but once acquainted, an XL bully can turn out to be the most loved member of a family.

The Extreme Bully is basically an amendment to the Standard Bully variety. An Extreme Bully dog is different in the sense that it has a heavier build and body structure. These dogs have a greater body mass due to their thick bones. The weight and height of this particular type are the same as that of the American Bully.

The facial structure, however, is wider and a bit wrinkled. The lips of these breeds are semi-closed and at times, loose. The rear portion of this dog is slightly heavier compared to the other breeds. A male bully has a height of 17” to 20” while a female bully is about 16” to 19” in height.

The Standard Bully is considered to be one of the best American Bully breed specimens – it is referred to as the Standard for a reason. In its overall look and size, it closely resembles a Bulldog. It is, in fact, closer to the American Pit Bull Terrier. Their bodies are compact and thick. The head is heavy, broad and often quite large, though not disproportional to their bodies. The muscles around the cheek are very pronounced while the entire body has a muscular build.

The Standard Bully comes with immense power and stamina. It turns out to be a great pet, mainly by virtue of its affectionate nature, especially towards the owners and the family members. Underneath the tough exterior, the dog has excellent bonding abilities and appears to love children. The breed is also tolerant towards strangers and can accept them well.

The Classic Bully is, on the surface, similar to a standard American Bully but with certain differences in its physical features. A Classic Bully is lighter in weight with a compact body, lean muscles, and heavier bones. These dogs are ideal for owners and breeders who want a less heavy bully breed with a lighter body mass.

The temperament of these dogs is somewhat similar to the Standard Bully. Therefore, the Classic Bully comes with a sociable, friendly behavior and a stable personality. They have a great personality with courage and intelligence being their dominant traits. They are also reliable and trustworthy and are much loved by their masters.

As the name suggests, a Pocket Bully is another subtype of American Bully that cannot literally be fitted in a pocket but is much shorter in height. The body of a Pocket Bully is visibly more compact compared to the other varieties. They look cuter and are perfect for owners looking for shorter bulldogs.

The head of these dogs is heavy, large and broader with the ears set high. Their eyes, on the other hand, appear in the shape of an almond or are simply oval. The color of the eyes can be blue or albino depending on the pedigree of the particular American Bully Pocket. A Pocket Bully is essentially friendly with a happy demeanor.

The American Bulldog is yet another popular type of pitbulls. Traditionally, these dogs were used as utility dogs and assigned to tasks like guarding the homes of their master. The lean, stout, muscular physique of an American Bulldog makes him suitable for different types of tasks, requiring hard work, strength, and stamina.

These dogs are assertive, loyal and affectionate at the same time, making them great work companions and even better family members. These days, many American Bulldogs, because of their sharp and diligent nature, are trained to become tracking and guard dogs.

The Bull Terrier is a breed of dog belonging to the Terrier family. These dogs are typically short and lack the bulkiness and muscular structure of the other bully breeds. The average height and weight of a male Bull Terrier are 18” to 22” and 25 to 29 kg respectively while the female Bull Terrier weights about 22 -25 kg.

With a lifespan of 10-14 years, the Bull Terrier comes with a short and dense coat and can be found in different colors including white, fawn, brindle, red, black and even tri-color.

Which Breed is the Closest to the Original Pit Bull Dogs?

They are solidly-built, medium-sized with short hair and smooth coat. Their structure is muscular, which is a dominant characteristic of the pitbull dogs. Compared to the Staffordshire Bull terrier, they are larger by 6” to 8” and heavier by 25 to 35 pounds. Being the closest to what the original Pit Bulls are, courage and tenacity form the basic character of an American Pit Bull Terrier. They can be aggressive to other animals but usually friendly and obedient to human.

Why Are There So Many Types of Pit Bull Dogs?

Unlike other breeds and types of dogs, pitbulls do not fall in a single category and the types of breeds that are considered to be pitbulls vary widely. This is primarily because of the absence of a central registry system like the AKC, which is applicable to all other breeds. This absence gives the buyers and breeders the freedom to do as per their choice and preference with practically no authoritarian body to oversee the matter.

This is coupled with the fact that most breeders and owners of pitbulls today are from a younger generation. They prefer their bloodline to be known for certain physical characteristics, purpose, skill or attribute of the dogs instead of something bestowed on them by a standardized system. Thus, new bloodlines and unofficial subtypes keep coming up without much organization or structure. At times, this process leads to remarkable results, inspiring fellow dog breeders to follow the same path. Other times, it leads to extinct bloodlines and unsuccessful bully breeders.