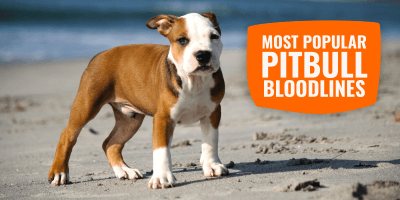 Pitbull bloodlines are a vast topic that can be a bit overwhelming if you aren’t aware of their complicated history. “Pitbulls” are not a single breed but are, in fact, a type of dog that contains various breeds like the American Pit Bull Terrier (APBT), American Staffordshire Terrier, American Bully, and the Staffordshire Bull Terrier.

There are many different popular bloodlines of Pitbulls, and each of these bloodlines has distinct features, structures, temperaments, strengths, weaknesses, and history. Pitbulls are typically loyal, amiable, playful, and strong. The breed’s history made them that way.

A great many bloodlines of famous Pitbulls originated from skillful breeders. These include Gator, Colby, and Razors Edge. Every bloodline has its own features and history like the Razor’s Edges were family dogs while the Chevy’s bloodline was more of a weight pulling type. Without further ado, here are the 10 most famous Pitbull bloodlines and their brief history.

Did you think registration was one way of knowing your Pitbull is purebred? Well, you are wrong.

Most of the organizations register Pitbulls regardless of their history. They also reject many purebreds due to their eye color or coat. So, having a registration number doesn’t prove that your Bully is a purebred.

Seek an ethical Pitbull breeder if you want to buy one or understand the breeding procedure. Popular Pitbull bloodline breeders, breed these for their traits, temperament, and gameness. An ethical breeder will have vast knowledge about the history, genetics, traits of this dog type as well as its breed standards, care, and training. These must be considered when looking to purchase a dog from popular bloodlines of Pitbulls.

Many people believe that Pitbull is a specific breed of dog, but that’s not true. The term Pitbull bull encompasses a variety of breeds like the American Staffordshire Terrier, American Bully, and Staffordshire Bull Terrier. The most popular bloodline when it comes to Pitbulls is the Colby Pitbull.

The Colby Pitbull bloodline is the oldest, purest, as well as the rarest bloodline of Pitbull. Here’s a breakdown of the physical features of this bloodline:

The most amazing fact about this bloodline of Pitbull is that that they have 150 years of history behind them. The old family red nose originated from Ireland in the 19th century. It’s a direct result of inbreeding between the Pitbull breed that was called the “Old family”.

The Red Nose Pitbull is popular not only because of its red coat and nose but also for its gameness and amiable nature. They are wonderful family dogs as they get along with kids of all ages.

The Red Nose Pitbull breed has a peculiar red, copper or brown hue to their fur, nails, and lips. They also have beautiful amber eyes that you will have a hard time ignoring, here are other physical factors:

The Jeep bloodline originated from the dog “Crenshaw’s Jeep”. He was a muscular male black-nosed buckskin, who was an American Pitbull Terrier bred by James Crenshaw in 1976. Crenshaw’s Jeep was unofficially crowned the best fighter, and he sired a massive number of champions before passing away at the age of 13.

The Jeep bloodline has many distinct physical features, such as:

Gottilines were created by Richard Barajas of West Side Kennels in Los Angeles, California. The sire used for this bloodline was Juan Gotty. Gotty sired his first litter when he was about 7 months old. The bloodline is known and popular because Gotty was one of the most celebrated “American Bully” of all time. People were so crazy after this bloodline that he sired as many as 1,300 dogs.

Gottiline Pitbulls are easily spotted as they are bulky. They are also a powerhouse of energy, which is why it takes a lot of gusto to train and work with a Gottiline. Apart from its physical features, the Gottiline Pitbull may look intimidating. But they are very amiable with people and other dogs.

Physical Appearance of the Gottiline

If you are under the impression that the Razor’s Edge is your average show, fighting or game dog, then you couldn’t be more wrong. Dogs belonging to this bloodline are exceptional companions for a family.

Pitbulls have been stereotyped due to their aggressive and intimidating look, but Razor’s Edge is one Pitbull bloodline that is neither aggressive nor hostile. In fact, they have quite a mild nature which is usually unexpected from a Pitbull.

Physical Appearance of the Razor's Edge

Razor’s Edge Pitbulls are American Bully dogs, but they are a breed with a very distinct physical appearance. The easiest way to spot a fake or watered down bloodline is to compare its physical traits and temperament:

Among the popular Pitbull bloodlines, Monster G is pretty famous. Coming from New Troijan Kennels, the originator of Monster G bloodline is Monster G himself. In his day, Monster G was a friendly and agile guard dog.

The Monster G bloodline is very athletic and loves to work out and chase balls. As Monster G comes from Greyline, it has the same physical traits and temperament. Most dog owners are scared of bullies because of their “supposedly” scary nature, but despite the size of these bullies, they have a very gentle nature.

The Monster G bloodline has the following physical traits:

They have very wide shoulders as well as a wide chest. The Monster G is very closely bred, hence its physical features are so distinct and that is what makes them so unique.

The X-Pert bloodline is one of the oldest American Staffordshire bloodlines, which is why most of the popular bully bloodlines have X-Pert blood in them. This particular bloodline was started in 1930 by Clifford & Alberta Ormsby. At that time, you could easily get a bully for $5, but they weren’t bred up to the standards that you’d expect nowadays.

The streets were full of bullies that had flat feet, no brisket, a narrow chest, bowed legs, as well as a fiddle front and cow-hocks. These bullies were also undershot and had an unreliable temperament. The first dog of the X-Pert family was a female by the name of Ormsby’s Madge. Clifford purchased her in Texas. Ormsby’s Madge was sired by the famous Pitbull, Bennett’s Mack, who had the blood of Smith & Tudor’s lines.

The Ruffians have a beautiful appearance that’s given in detail below:

Gator Pitbulls or the Gator-mouth Pitbull directly descended from CH Rodriquez’s Gator ROM and CH Plumber’s Alligator POR. These were initially bred for fighting, but ever since dog fighting has been banned, some believe that this bloodline has gone extinct.

However, if you are searching for a Gator Pitbull, you will need to research a lot and find a highly reputable kennel that runs their business on ethical practices. Be wary of websites as well as backyard breeders that advertise Gator Pitbulls. Also, demand a bloodline certification if you decide to make a purchase. This is a common practice so no real breeder will deny you these documents.

Gator-mouth Pitbull may have been a fighting breed, but that has changed. At present, they are very social as well as great family-friendly pets. Due to their social nature, you will not have any problems introducing them to your other pups.

All Pitbulls are different; some are known for their gameness, some for their fights while others are famous for their social skills. However, if you want it all, it’s the Carver Pitbull you want.

There you are! We have covered all the highly sought-after and popular bloodlines of Pitbulls. However, before you adopt, buy or decide to breed one, you should be aware of the rules and regulations regarding Pitbull breeding. It’s easier to understand the key traits of your Pitbull when you are aware of the history of the bloodline.

Unfortunately, due to irresponsible breeding, not all Pitbulls meet breed standards. Moreover, some also do not have any pedigree information on them. A correctly bred Pitbull will be social, responsive and eager to please. Irresponsible breeding is the reason why people fear this great breed so much.