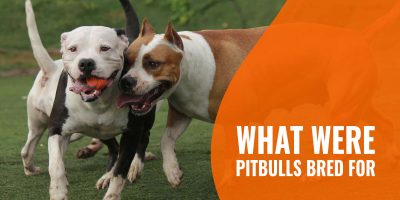 Pit bull is the common name for a breed of dog descended from bulldogs and terriers. The pit bull-type is ambiguous, encompassing a range of breeds that cannot be reliably identified. Formal breeds included under the name “pit bull” include the American Pit Bull Terrier, Staffordshire Bull Terrier, American Bully, and the American Staffordshire Terrier. But what were pitbulls bred for?

Many of these dogs were developed as fighting dogs, created by crossing bull-baiting dogs with terriers. This combined the strength of the bulldog breed with the agility of the terrier breed. Sadly, this has made pit bull-types the main targets of dog fighting over the years, persisting even today. Now, pit bull-type breeds are rightfully finding their places in our society as companions, working dogs and show dogs.

Bull baiting was a blood sport. It involved pitting dogs against bulls, usually with the bull tied to an iron stake bolted into the ground. These cruel matches were held for entertainment; a source of relief from hardships of the people. It is unclear when the sport first came to England, but reports suggest that it began as early as 1209 in Stamford during King John’s reign. What we do know is that, from the 13th to the 18th centuries, bull baiting was a national sport of England, and dogs were selectively bred to perform in the ring. Thus, the Old English Bulldog was made. This breed was trained to “pin” the bull, fastening its teeth around the bull’s snout.

In 1835, the Cruelty to Animals Act caused a decline in blood sports in the UK. This consequently led to a decline in the Old English Bulldog’s popularity. However, despite the Act making bull baiting illegal, the activity would persist for many years.

The Old English Bulldog was specially bred for bull-baiting. While it was successful at bull-baiting, its tactics were not “enjoyable” to watch. Because the breed would “pin” bulls and hold them, this fighting style did not translate well into dog fights, as there was not enough action. So, breeders created a cross between the Old English Bulldog and the Old English Terrier. This created a fighting breed with more speed and dexterity, known as the bull-and-terrier. The bull and terrier was the ancestor of our modern-day breeds. Staffordshire Bull Terriers, English Bull Terriers, and American Pit Bull Terriers are all derived from this distinct cross.

The Humane Act of 1835 sought to ban bull baiting, bear-baiting, and dog fighting. Unfortunately, this ban actually served to promote more dog fighting activity in England. Since only a small space was needed for the fighting pit, compared to the much larger size of the bull or bear-baiting ring, the authorities had a hard time finding the fights and enforcing the ban. It was also much cheaper to organize dog fights than bear-baiting as the price of bears increased. This allowed the bull-and-terrier cross to live on.

Around 1860, the bull-and-terrier split into two types, gradually forming two distinct breeds. The pure white Bull Terrier lived on for 70 more years in the fighting ring until it finally became known as today’s Staffordshire Bull Terrier. Around the same time, bull-and-terriers taken to America were bred to become heavier and taller. This variation was known as the American Pit Bull Terrier by 1898.

Modifying the Characteristics of Pitbulls

After their arrival in the USA, the APBT and other pit bull-type breeds were a prominent part of culture. Public attention turned away from dog fighting and the breeds were seen more as companions. The USA seemed to admire these breeds for their best qualities; friendly, hardworking, brave, and worthy of respect. They soon became the All American Dog!

These frontier dogs dogs were all-purpose. They were responsible for herding and guarding livestock as well as helping with hunting. This meant that not all pit bull-type dogs were bred to fight, letting their true characters to shine through. Sadly, the American Pit Bull Terrier also became the breed of choice for dog fighting in the USA until 1976, as this is what pitbulls were bred for in underground fighting rings.

Many advocates for the breed have worked hard to change the characteristics of the APBT. Through selective breeding, the APBT has been encouraged to have a “soft mouth”, also known as bite inhibition, towards humans. The Old Family Red Nose Registry considers human aggression grounds for disqualification. Similarly, The American Preservation Dog Registry states that the temperament of these dogs “must be totally reliable with people.” However, one problem does persist with the APBT – dog aggression. In fact, the UKC’s breed standard for the APBT states that most APBTs exhibit some level of dog aggression. With that being said, not all APBTs are dog aggressive. You can increase the likelihood that your pit bull pup grows up to be social.

Originally enacted in 1966, the Laboratory Animal Welfare Act is now known as the Animal Welfare Act. The Act has been amended several times. It is intended to ensure the humane treatment of animals, including those that are exhibited to the public, bred for sale, and commercially transported. In 1976, the Animal Welfare Act was changed to ban the use of animals for fighting in all 50 states of the USA. This included the breeding, sale and keeping of dogs for dog fighting.

The ban encouraged some dogfighting to continue. Dogfighting matches were instead held underground. Sadly, they still are to this day. Modern-day dogfighting is, unfortunately, still a profitable blood sport. CNN estimated in 2007 that there were more than 100,000 people involved in dog fighting as non-professionals, and a further 40,000 involved as “professionals.” With that being said, there is a $5,000 reward for reporting dog fighting to the Humane Society of the United States. Dogfighting is a felony. It must always be reported to the authorities. Signs of dogfighting include:

Fortunately, there have been several attempts to change public perception of the breed. The UKC unsuccessfully attempted to register the breed with the word “pit” in parentheses. As well as this, the San Francisco Society for the Prevention of Cruelty to Animals attempted to rename the breed to the “St. Francis Terrier.” This was in hopes that the public would be more likely to adopt these unwanted dogs. The New York City Center for Animal Care and Control tried a similar tactic in 2004. They renamed their pit bulls to “New Yorkies” temporarily.

Today, the APBT and other pit bull-type breeds have secured their rightful places in society. These dogs continue to receive more positive media recognition due to advocacy and better education surrounding the breeds. Pit bull-type breeds are now famous for their roles as companions, police dogs, search and rescue dogs, drug detection dogs, and television personalities. Not only this, but they excel in the show ring! Many pit bull-breeds are great at agility and weight pulling due to their dexterity and strength. Many pit bull-type dogs have made good therapy dogs. Their natural affinity for people, their tolerant nature, and eager-to-please attitude make them great companions to those who need them.

The history of our modern-day pitbull-type breeds is not something to be ignored. It’s true that pit bull-type dogs have been exploited for hundreds of years. While dogfighting was their main use in the past, most of society now welcome these hard-working dogs as companions, search and rescue dogs, narcotics detection dogs, and even television personalities.