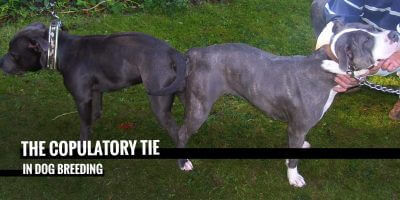 When involved in dog breeding, there is a time when things need to happen. By things, I mean intercourse so the male dog can impregnate the female dog. Unlike many other animals, dogs have what we call the copulatory tie when they mate. And if you have never seen it, it is scary because they both turn their rear end on each other.

This act is called the tie, and many new or occasional breeders do get anxious at witnessing the act. They don’t know whether the copulatory tie in dogs is painful or not, and some don’t even know how long they should expect both dogs to get stuck.

This article demystifies the copulatory tie when breeding two dogs, so keep on reading and relax, it’s not that crazy of a deal!

What is a tie in dog breeding?

The copulatory tie is one of the stages occurring during the mating of two dogs where the two dogs are locked together due to the expansion of the male’s bulbus glandis, an organ that keeps him tied up with the female. Don’t panic – this is a perfectly normal thing to happen between two dogs that are mating.

Mating in dogs may look like it’s the same thing that humans do, but it actually is quite different. Here’s how mating happens with canines:

The purpose of a copulatory tie is mainly to keep the semen secured inside the female dog. This technically means that the female dog gets the highest chance of getting puppies. However, contrary to popular belief, it’s not strictly a requirement for pregnancy (mentioned below in “slip mating”).

How long do dogs stay stuck together?

Dogs can get stuck from butt to butt in the mating tie as quick as only 5 minutes. However in some cases, the copulatory tie can take as long as 30 minutes. It really depends on the individual dogs and their breed. Some dogs get panicked and that locking position may take longer because of the induced anxiety, while some studs stay calm and get over it very quickly.

On rarer cases, there can even be dogs that spend about an hour tied together, which can be quite agonizing for them (especially for virgins, as explained below). But for the average record, your dogs can take roughly about 10 to 20 minutes in a mating tie, with the most being 13 or 14 minutes.

Usually, it depends on how long the male dog will ejaculate his sperm into the female dog so you might have to wait a while and be patient with it. The dogs will stay stuck together for as long as the bulbus glandis doesn’t revert back to its original size.

Is the tie painful for either dog?

How much discomfort or pain is felt by both dogs really depends on a few criteria:

Male dogs usually don’t feel much pain during copulatory ties unless it is their first or second time. However, there’s a case in which the male can suffer from real pain. The swelling of their “bulb” can be a new experience to them, and they might suddenly try to dismount from the female in anxiety, which can be painful to them since the male’s engorged penis is too big to come out. This is why you shouldn’t separate them at all during this mating tie so as not to hurt both the bulb and the penis of the stud.

Female dogs tend to get a little more pain out of a tie, especially if they are a virgin dam. In such situations, comforting the female can help if she starts to get anxious. Still, do not attempt to break them apart because it will hurt both the female and the male dog even more. This is because the female dog’s vaginal passage becomes a narrow path in this process, which makes it very uncomfortable if you try to separate them during a mating tie. Virgin females will also have a narrower vagina, so it will be more hurting for them to bear.

How to tell if the coitus goes wrong?

Let’s tell the whole truth: virtually all canine matings require no intervention from the breeder whatsoever. Even when one of the dogs is in pain, we still should not intervene. Let the whole mating unfold and only intervene in a few clear cases.

And again, remember that if it is a dog’s first-time mating, he or she may get stressed out or anxious. This is why you need to reassure him or her by being around, and never show them that you are worried or panicking. This would be harmful and extremely unhelpful. Instead, show love, stay near them if they are happy with it, and even stroke your dog to be reassuring and diffuse any stress your dog may feel.

Here are some problems or unusual things that you may encounter during the copulatory tie process and what to do with them:

If you see the female dog or the bitch cry, whimper, or scream when mating this can be a sign that she is hurt by the process. As we mentioned above, try to calm her down because she might hurt the male even more and ruin the coitus process altogether. Usually, the male dog just stands there until the “bulb” has settled down to size, but he might get hurt if the female dog moves abruptly due to a sudden rush of panic.

Often, once the female is panicking and hurting the male, he will, in turn, become distressed because of the sudden severe pain he is experiencing. Generally, dogs would simply run away but because the copulatory tie locks them together, they cannot move, adding even more panic to the whole situation.

Before this escalates further, as the dog breeder you must reassure your dog, and the other breeder should soothe his dog, too. This is as far as your intervention should go during this process.

You might sometimes see the two dogs as if they are sleeping while they are locked together – this is also perfectly normal because they are simply relaxed and may not be actually sleeping. In these situations, avoid coming close and disturbing them, having them so relaxed that they can even close their eyes is the perfect scenario for a breeder, and for the dogs themselves.

The coitus may not happen at all if the stud withdraws his penis from the female before his bulb enlarges. This is also known as slip mating, and it usually happens if the bitch is not fully ready for mating yet and move as soon as the stud penetrates her. In such scenarios, just try again on the morrow or the day after that.

Contrary to popular belief, slip mating can still impregnate a bitch if the stud became successful in releasing the semen into the female then withdrawing his penis afterwards. This is because the first ejaculation of the male dog usually has the most semen and sperm in it.

Be wary, that in some cases, the stud’s penis may have enlarged right after he pulls out from the bitch, so you should catch the seminal fluid in a container to keep everything clean.