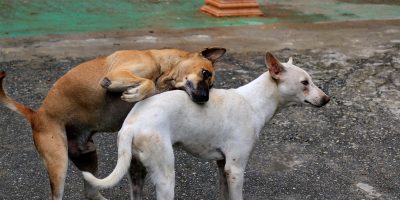 A common question amongst new dog breeders is, “why do dogs scream when mating?” It can be nerve-wracking to witness your dogs appear in pain when mating. However, vocalizations during mating are not always due to pain, and it’s important not to intervene unless necessary.

Dog mating sounds can vary from panting to whining to outright screaming, which can be unsettling for inexperienced breeders to witness. But what do these sounds mean? And are they a cause for concern? Read on with us to find out more!

What Happens When A Female Dog Is In Heat?

From the beginning of your bitch’s heat cycle, she will attract male dogs. However, she will not be receptive to their advances until seven to ten days into her cycle. As your bitch’s cycle progresses, the discharge she produces will change from bloody and thick to watery and blood-tinged.

Male dogs are often more sensitive to stress when mating than females are. Successful matings are most common when the stud is in his home environment. When the mating begins, the male usually starts by sniffing the female’s vulva. If receptive to him, she should pull her tail to one side.

This behavior is called flagging. From here, the male mounts the female and begins to mate with her. After ejaculation, the two dogs will form a breeding tie. The male should lift his hind leg, and the two dogs should stand rear-to-rear with each other. During this time, the bulbous gland of the male’s penis will swell, causing a lock. This tie lasts anywhere from 2 to 40 minutes.

Is It Painful For Female Dogs When Mating?

There are a few reasons why either of the two dogs might scream, cry, or yelp during mating – one of these is pain and discomfort.

If your bitch yelps, snaps, or screams as a male tries to initiate the mating, then it is too early. When the bitch is still early in her estrus cycle, the nerve endings in the vulva are too sensitive and engorged with blood. Some physical health issues can cause a bitch to reject a male.

Infections and tumors are just a few pathologies that can cause pain and discomfort. It is important that you don’t force your bitch to accept the male when she is not ready. Doing so can cause stress and anxiety for her and make her aggressive regarding future matings.

When choosing a stud for your bitch, you must consider his size. The ideal pairing will be close to the same weight and size. While the female will not carry the entire weight of the male during mating, a significantly larger stud could hurt her.

How to Keep The Dogs Safe During Mating

A maiden bitch may become anxious and panicked when locked in a breeding tie with the male. This can lead to vocalization and struggle on her part. It is very important to do your part to keep the bitch calm during this time, as barking, screaming, and howling can traumatize a male dog.

If she struggles, she also risks causing injury to the male. It’s important to note that no matter how receptive a bitch is beforehand, she may still scream during the tie – so you must be present at all times to ensure safe breeding.

To keep your dogs safe during breeding, it’s important to keep them calm. First and foremost, keep loud noises, distractions, and other people at bay, so your dogs aren’t disturbed. The space that they mate in must remain calm and quiet for the entirety of the process. If your dogs do become disturbed or frightened, be sure to calm them by gently petting them, praising them, or holding them as necessary.

So, why do dogs scream when mating? Some dogs will scream due to stress, being bred too early, injury and pain. Have any more questions or concerns about dog mating sounds? Feel free to check out our FAQ for more details!

Is it normal for a female dog to cry when mating?

For some bitches, crying when mating is normal. However, if your bitch does not normally cry when mating and starts to do so, it could signal that something is wrong. She may be stressed, anxious, in pain, or not receptive to the male’s advances.

Do male dogs cry when they want to mate?

Male dogs often whine, become agitated, and become more aroused when they can sense a bitch in heat. These behaviors are normal for a male. A bitch releases pheromones that a stud can detect from a long distance away, and some dogs will roam in search of the bitch in heat. Because of this, it’s important to keep your bitch in heat in your sights at all times and don’t leave her unsupervised, especially outside.

How do you know if dog mating is successful?

The most obvious sign that your dogs’ mating was successful is that the dam becomes pregnant. When her cycle ends, her nipples will begin swelling, and she may go off her food. Before this, a female dog who has just mated may be standoffish around males. They may also sleep more than usual, change how they walk and be more lethargic.

Do female dogs bleed after mating?

It is normal for a bitch in estrus to continue to bleed even after breeding. As long as the bloody discharge is not excessive and your dog is otherwise behaving normally, then it is not a cause for concern. As well as this, the breeding process may trigger some blood that has pooled. Be sure to check your bitch for injuries after mating if you have concerns about her bleeding.

Dogs scream when mating for many reasons, including stress, anxiety, pain, and being bred too early. Always supervise your dogs as they mate to prevent injuries and stress.