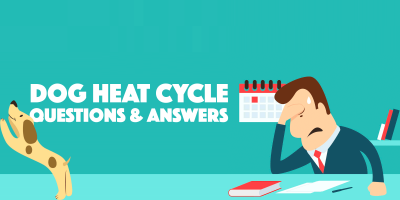 Since we’ve published our most-read article ever about the stages and signs of the dog heat cycle, we’ve collected and compiled the questions you have all asked us the most and put the answers on this page. Clear and simple.

We don’t want to go to great lengths here! Instead, we give clear answers to clear questions about your female dog’s heat and season.

If you are going to breed your bitch and are wanting to produce quality dogs, check out our How To Breed Dogs page and The Dog Breeder’s Handbook to have all information at hand to plan a healthy and promising litter, and find the right homes for them (at the right price!)

What exactly is the heat in dogs?

Proestrus and estrus stages can last anywhere from 5 to 15 days each, the length varies greatly between individuals. Both these stages together form what we commonly refer to as the heat or season.

Estrus is the stage in a female dog’s reproductive cycle wherein she becomes receptive to mating with male dogs. During the heat, her estrogen levels rise only to abruptly decrease shortly after. Mature eggs are released from the bitch’s ovaries and her body is preparing for mating and the possibility of producing a litter.

What are the signs of a bitch coming into season?

There are several signs to look out for when your bitch is starting her heat cycle:

Although this is a list of the most common signs announcing your female dog’s heat, there could be one or two of these signs showing. You need to read your bitch attentively.

How long are dogs in heat?

The short answer is approximately 2 to 3 weeks.

The heat in dogs usually lasts around 18 days, but can often last anywhere from 12 days to 28 days. We commonly say a bitch takes one week to come into heat, one week to be in heat, and one last week to come off heat. This is a rule of thumbs and is extremely approximative.

When does the first heat occur in dogs?

The short answer is between 8 and 18 months but it varies greatly between different breeds and sizes.

Females reach sexual maturity (puberty) between 8 and 18 months of age. There is tremendous variability in the maturation age between different breeds and sizes of dogs, and even within a very same breed.

Have in mind that some female dogs are sometimes having a silent heat: your bitch comes into season but doesn’t show any sign of it. You end up waiting for her heat when it has already happened without you noticing. It is rather rare though.

How long does a dog stay in heat after bleeding stops?

Female dogs stay in heat for 17 to 21 days depending on their age, size, and overall health. The bleeding stops towards the beginning of the female dog’s heat and generally lasts for a week or so. In most cases, the dog will remain in heat for an extra week after the bleeding stops.

These figures and numbers are generics and averaged, many dogs can even go through a silent heat cycle where the female doesn’t show any signs of being in her estrus cycle, but still goes through it. Do not take the bleeding as the only symptom of your female going through her ovulation period. It sometimes doesn’t appear at all, or sometimes appear for longer than normal. The best way to know whether a female is still in heat is by seeing how males behave around her, whether she is bleeding or not.

Do dogs have to be in heat to get pregnant?

The short answer is yes.

Oestrus, also called Estrus, is where eggs are released from ovaries and the oestrogen levels decline while progesterone levels rise. It is only during this Estrus stage of the dog heat cycle that pregnancy will result from a successful copulation or artificial insemination.

You will hear of stories of females getting pregnant without bleeding or without a visible heat, but these are simply silent heat cycles that some females go through (i.e. a heat without visible signs).

When is the best time to breed a dog in heat?

The short answer is 11 to 13 days after the bleeding has started.

Perhaps the most asked question! When is a dog in heat ready to breed? When is a dog fertile during heat? What day of the dog heat cycle should I breed my bitch? How many days into a dog’s heat do you breed?

There is no magic formula or answer to this questions but there are way to figure out the best time to organise the mating. Normally, it is about 11 to 13 days after the bleeding has started, when you notice the bleeding has thinned down to a more pink color.

Your male will know — if you have a male, he will know when the female is available therefore when it is the best time to do it. A female is wary of males during the first days or week of the heat. She then slowly becomes more attracted to them and eventually shows she is available by flagging her tail and taking a position that is ideal for a dog to mate her.

Your vet can tell you — if you haven’t got the male around, you need to call up your vet on the first day to setup some appointments on days 5, 7 and 9 of the heat so the vet can take a smear of your bitch, and then perform a progesterone blood test on days 9 to 11. That way, your vet will tell you exactly what day is best so you can either bring perform the artificial insemination, or organise the meeting and mating with the stud.

How many heats does a dog have?

The short answer is that small breeds go on heat every 4 months, medium breeds every eight months, and large ones every year or more.

However, this often varies especially in the beginning, as it can take some dogs a year and a half or two years to develop regular heat cycles. Small dogs are known to come into season more frequently, as much as three or four times a year sometimes. On the other hand, giant breeds (ie. Great Danes and St. Bernards among others) tend to go into heat every 8 to 12 months.

How long between heat cycles for your dog depends on the breed, the size and the individual. Obviously, the longer a female dog lives, the more heats she will go through. On average, female dogs cycle into heat every six months.

Your bitch will continue to go into heat throughout her life, although the length of time between estrus will increase as she gets older.

Can I breed my bitch on her very first heat?

The short answer is yes.

We usually say that a female should not be bred on her first heat. The reason why is that she has immature eggs and she won’t be fertile enough to produce puppies of great quality. Some voices say the second heat should also be avoided.

The rule of thumb is to wait around 18 to 24 months to have the first breeding. This is what some ethical breeders will do so both the bitch is ready to cope with pregnancy and her eggs are mature enough.

After a year and a half, the bitch will have been through the health tests and medical checks, making sure her progenies will be as sound as possible.

Are bitches fertile at each and every season?

The short answer is no.

The first couple of seasons your bitch will go through will not be her most fertile ones. Her eggs are not mature enough at this stage and it will be the same with her last few heats once she gets much older.

Also, even if she gets pregnant, you have to think about how a very young or very old dog will handle and cope with a pregnancy. It is extremely draining and better experienced in a female dog’s prime window, usually from 2 years of age and for a handful of years.

I think my bitch is pregnant, what do I need to buy to be ready?

When you confirm that your dog is pregnant, you have roughly 63 days until she gives birth. During that window, you must buy all the essential whelping supplies you may need in case of emergency or just to look after the litter over their first few days of life.

Mainly, you will need to have the below ready as soon as possible:

We’ve prepared a full list of the supplies you must have in your perfect whelping kit so you can be prepped up in case of a quick intervention needed during labour and delivery. Most of the time, Mother Nature allows the bitch to deal with it all on her own, but you’ve got to be ready to jump in if need be.

We’ve listed the whelping emergencies and how to deal with them in our dog breeding master course if you want to learn more about these.

What are the common abnormalities in bitch heat cycles?

Just like with women, the cycling in dogs may at times be irregular or abnormal. It does not mean it is necessarily unhealthy.

There is so much to cover when it comes to heat cycles in dogs but all the above should lighten any dark areas you may have had.