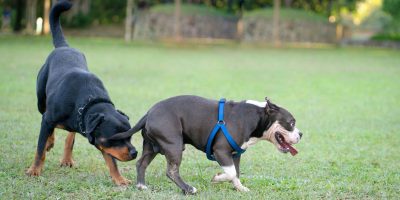 Canine heat, or estrous cycles, consists of various stages — bloody discharge, behavioral changes, and high fertility. A dog’s heat cycle is crucial to the development of its body. As a dog owner, you should know the answer to how often do dogs go into heat.

This article will inform you of the frequency, signs, and other necessary things to know about the heat cycles of dogs.

How Often Do Dogs Go Into Heat

On average, heat occurs every six months or twice a year. The interval can vary between breeds. Smaller breeds often go into heat more frequently than larger breeds. Three to four heats are typical for some toy breeds.

How often do dogs go in heat? Giant breeds, like Irish Wolfhounds, St. Bernards, and Great Danes, may only go into heat once every twelve months. No specific time of the year corresponds to the breeding season for dogs, except for Basenjis and Tibetan Mastiffs, who usually have heat cycles in the spring.

It is usual for young pups to have irregular cycles at first. It can take 18-24 months for some dogs to develop a steady heat cycle. A study about the Frequency of Different Estrous Stages in Purpose-Bred Beagles states that the estrous cycle stage in dogs is considerably longer than in most other domesticated animals. It typically lasts about three weeks, although this number can vary from 2-4 weeks.

A female canine may let a male dog mount her at any time during the heat, though most not only allow it but even actively seek it. Your female dog will continue to experience a heat cycle throughout her life. Note that the time between heats will increase as your dog ages.

At What Age Do Dogs Go Into First Heat Cycle?

Female canines can get pregnant during their first cycle. They are physically capable of having pups, but your dog is far from ready to raise them. It is important to note that getting pregnant after their first heat poses health risks for both the dog and the pups.

Aside from the delivery and labor, the constant nursing she needs to give her pups can cause too much stress for their young body. So, do not breed female dogs in their first heat season.

Signs That Your Dog Is In Heat

When do female dogs go into heat? In most cases, a bloody vaginal discharge is one of the first noticeable signs of a dog in heat. This sign indicates that your dog is in proestrus and the heat cycle is about to begin. The amount of vaginal discharge varies from dog to dog.

Another early sign of heat is the swelling or engorgement of the dog’s vulva. Like vaginal discharge, the amount of vulva swelling also varies from dog to dog. Some only swell slightly while others swell a lot. Often, it is about 2-3 times its average size.

You might wonder, what does it mean when a dog is in heat? It means they are fertile, ready to breed, and receptive to mating. If your dog is becoming attractive to male dogs, then you can take that as a clear sign that it is going or in heat already.

According to a study about Female Chemical Signalling in Mammals, males can gain a range of information about a female dog’s reproductive state via various scent sources (body glands and genital secretions). That explains why male dogs zero in on a female’s private parts when she is in heat as they can smell the heavy scent of pheromones.

It is normal behavior for dogs to keep themselves clean by licking their body. Though, if you notice that your unspayed dog is licking her genitals more excessively than usual, it is a good sign that she might be in heat. Licking is her response to the vaginal discharge and swelling vulva.

A dog in heat sometimes experiences a behavior change. She may become aggressive or anxious during the cycle. She might also display nesting behavior, a sign that she is preparing for pregnancy.

A female dog ready to breed and mate often urinates differently. Your dog may:

When a female dog enters the second stage of her heat, they are ready to mate — this can show in her posture and tail position. Your dog will show a suggestive posture as a sort of invitation. She will raise her tail slightly and curl or move it to the side.

Things You Should Do When Your Dog Is In Heat

If it’s your dog’s first heat cycle, it can be a daunting and unsettling situation for both of you. Note that a female in heat wants to breed and can be grouchy. So, how can you make it easier for her? You can check out these helpful tips:

Never Allow Your Female Dog to Go Out Alone

Male dogs will undoubtedly be on a hunt once they smell a female in heat. She will release breeding pheromones that can attract instinctual noses from far away.

Do not let your dog go out unsupervised or alone. Monitor her when she is out for potty breaks or routine walks.

Have Your Dog Wear a Leash Whenever She is Outside

Dogs in heat naturally fall victim to their hormones and instincts, which in this case are telling them to breed. It won’t matter if she has excellent obedience skills or training. There is a high chance your pup won’t listen to you during this period. It is best to keep her on a leash when going out so you can control her.

Consider Spaying After the Heat Cycle

If you do not want your dog to get pregnant, it would be wise to consider waiting after her heat is over to spay her. Consult a veterinarian and ask for their opinion regarding the matter. They can tell you the appropriate age that is safe to spay a dog.

Consult with Your Veterinarian for Unusual Signs

There are times when a female dog experiences health problems after her heat. It is when her uterine lining remains thick and still produces more fluid, creating the perfect environment for bacteria to grow and nurture. It can lead to life-threatening pyometra.

How Often Do Dogs Go Into Heat: FAQs

Here are the answers to the frequently asked questions about the frequency of a dog’s heat cycle.

How long does the heat cycle last?

Heat typically lasts between 2-4 weeks. Do note that it is different for every dog. Heat can be shorter or longer — you’ll know it’s over once your dog’s vulva returns to its average size and when there’s no more discharge or bleeding.

At what age should I spay my dog?

The preferred age to spay a female dog is at least six months. They need to be older for large breed dogs. Playing large dogs before they reach six months poses some high risks of orthopedic health problems and certain cancers. That risk is statistically lower at 12 months.

Can a dog get pregnant outside of heat?

When is the best time to mate and breed your dog?

The best time to breed or mate for most female canines is between the 10th and 14th day of their heat. However, some female dogs ovulate as early as the 3rd or 4th day or as late as the 18th day. It is advisable to arrange two matings and call stud services, often 24-48 hours apart.

How many stages does a dog’s season have?

Heats are not exactly a fun time for either you or your dog. It is lengthy, messy, and uncomfortable for your pup. Until your female puppy is spayed, it will experience heat. Knowing how often female dogs go into heat can help you prepare for this aspect of their lives!