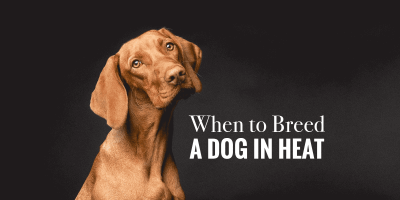 A bitch in heat must be bred when her reproductive cycle is at its most fertile stage which is 11 to 13 days after the initial bleeding of the heat’s first stage. This estrus stage is the second stage of the heat cycle and is the only time in the cycle when pregnancy can occur after coitus or artificial insemination.

The oestrus stage is the time in which a female dog’s progesterone hormones are at their optimal levels for successful breeding. Due to bitches not being fertile at every season, a female dog should not be bred until 18 to 24 months of age when her eggs have sufficiently matured to produce quality offspring.

Depending on the size of dog and breed, smaller dogs will go into heat every 4 months, medium size dogs every 8 months, and large dogs will breed every 12 months or more. That said, the first couple of heat cycles in a dog are not sufficient to produce satisfactory breeding results.

Estrus, oestrus, estrous, and estrous can be used interchangeably. They all refer to the stage in a female dog’s heat cycle in which she can be impregnated.

When Do You Know It's The Best Time?

Typically, a dog will be in heat for 2 to 3 weeks with varying stages. The stages of a dog’s heat cycle are designed to help a breeder determine the ideal time to start breeding and when to avoid mating. These stages are broken down into four distinct parts that complete the entire heat cycle. The average length of the heat cycle in a female dog is 21 days. However, it depends largely on the size, breed, and general health of each individual dog.

The heat cycle starts with the proestrus stage which lasts roughly 9 days and is marked by a sudden rise in estrogen and maturation of the eggs. Physical signs that accompany this stage are an enlarged vulva and the release of bloody discharge which tell you that the bitch is getting ready to mate.

However, it is the estrus stage that determines when to breed a dog in heat. During the estrus is when you should breed a female dog to maximize her chances of pregnancy. Estrus is also the only time she will be able to impregnate. The oestrus cycle lasts roughly 9 days as well and marks the time in which the eggs are released and are ready to be fertilized. During estrus, the female will start to show signs of interest. This is when you should start encouraging the mating between the sire and the dam.

Both cycles, proestrus, and estrus can last between 4 to 21 days each depending on various factors about the dogs such as overall health, size, breed, and so on. On average, estrus and proestrus each last 9 days.

Signs That a Female Dog Is Ready To Mate

Signs to watch for that will show you she is ready include:

Keep in mind that not all dogs will show all signs when she is ready, so to be sure you need to be alert and pay attention to your dog’s behavior. Dogs can also go into “silent” heat in which she will show no signs at all which can often confuse an inexperienced breeder.

Tests to Determine When to Breed a Female Dog

Besides watching for the common signs, a breeder may want to get a professional opinion on whether the dog is already in season and ready to mate. A veterinarian can perform specific medical exams to determine more accurate results. Be aware that there are precautions to take when your dog is pregnant for the first time.

A vaginal smear test is an excellent way to check for cell changes that can more accurately predict ovulation which is performed over a number of days to check for any progression and changes. These smear tests are completely safe, reliable, and have been around for a long time with optimal results. The whole consultation is fast and results are very accurate.

During the proestrus stage of the heat cycle, bitches will show a rise in estrogen levels while their ovaries are maturing and getting ready for release. Once they are released and the female dog enters her oestrus stage, her estrogen levels drop suddenly and progesterone levels rise, therefore testing for progesterone levels is one way in which a professional can determine if she’s ready. This test will give a breeder an accurate result and determine the best time to start mating. To date, this is the main and most precise test to know when to breed a female dog in heat.

Furthermore, testing can also be done at home. You can buy over-the-counter test strips to determine when to breed a dog in heat, rather than going to the vet. Test strips such as the Canine Ovulation Test Pads are designed to give accurate ovulation readings and should be done both in the morning and at night. These strips can be used on the first day of her cycle and will determine the level of LH surge which elicits the release of the eggs.