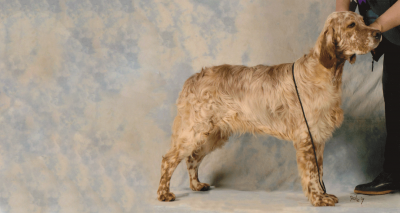 As this is my first contribution about English Setters and dog breeding to this publication I feel I should first introduce myself to you all.

I first started my Pilsdon Kennels in 1970, when I was able for the first time to care for and have time for a dog of my own. I had always had a soft spot for setters, but it was an English Setter which I named Rosco, who chose me. I had no intention of breeding or showing at this stage, but just owning a well-bred pet. I viewed a locally bred litter and this bundle of grey fluff picked me.

Rosco was a well-reared specimen from good parent lines, and I tentatively entered, for fun, a few Exemption shows, doing rather well, including a Best in Show award. This started off my interest in more advanced showing. researching the history of the breed, which for me has no comparison, and eventually breeding and establishing my line.

In the 1970s the average entry for a championship show was around 200 dogs but it soon escalated, with the popularity generated by a couple of Crufts Best in Show awards, to over 300 per entry, which meant that the classes had to be split between two Judges, one for dogs and the other for bitches. Since those heady days, the breed has declined in number to a real low when last year when we became a breed on the vulnerable and, Kennel Club watched list, with few litters being bred and registered.

There are two distinct types of English Setters, the Llewellyn (working type) which are agile, finer built, and quick brained, and the Llewellyn (show or bench type) which are heavier and appear more dim-witted, which is a cover for being willful and independent. Both have the most wonderful temperament and are full of beauty and grace and are a pleasure to own English Setters are not an easy breed to handle and train. They know just what you want them to do but will do it in their own time, which can be infuriating and frustrating. They require plenty of exercise and grooming to keep them fit and their coat tangle-free.

During the days of the breed’s popularity, it became obvious to me, as I had been approached by several people who wanted to re-home their dogs, that a Rescue was needed, and it was with the late Gladys Jenkins that I founded the English Setter Breed Rescue, and we ran it between us for several years. Nowadays we have few show type dogs to re-home and the rescue mainly helps to find homes for the working variety which come over from Ireland and on occasions Greece and Spain.

Over the years I have bred several litters and made up a champion and CC and Reserve CC winners and all my breeding stock have attained their Stud Book numbers which is what I aim for, as I have been unable to campaign my dogs far from home. I have studied pedigrees and conformation, health and welfare, and hope to have produced sound, fit for purpose, dogs.

I first awarded Kennel Club Challenge Certificates in 1987 and since then have become a best in show and gundog breed specialist judge. Age is now catching up with me, and I have cut the size of my kennel down to a manageable number, I hope to breed just a couple more litters.

I feel I am able to view the breed from a distance and comment on what I feel has happened to it during the last fifty years. Warn against exaggerations and changes in type from early times and predict where I hope English Setters will be in the future. All this in subsequent English Setter breeding articles.