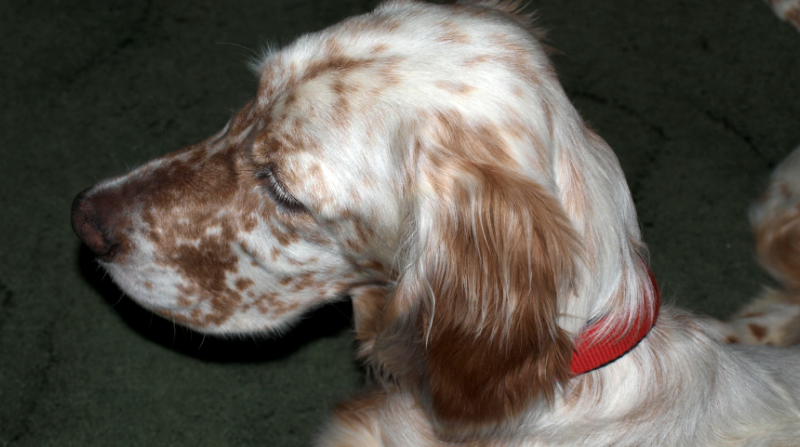 In the first of my articles, I intend to compare the original English Setter breed standard set by Edward Laverack in 1872 with the Kennel Club standard revised in 2009.

A Tough But Necessary Selective Breeding

English Setters were founded by this great man from dogs imported in from the continent and selectively bred to be superb gundogs.

Only the best were retained and many were culled at birth if not of the correct make or shape or color. Also at later dates, if the dogs proved to have little game sense or bid ability.

Nothing was bred from that had not proved itself to be outstanding when hunting grouse over the moors or woodcock in the thicket.

The Colours of The English Setter

Colour seems to be the predominant inherent feature of the breed.

Edward Laverack favored coats made up of black and white, orange and white, liver and white or a tri-color mix of ticking, which he called Belton, and bred selectively for this marking.

Whole colors and patches were frowned upon and discarded, although occasionally one with outstanding game sense was kept and allowed to reproduce.

So we have today, over 150 years later, a uniform coloring for the breed throughout the world.

English Setters Were Bred With A Purpose

Sadly the days of the great estates have all but gone, and with them, the large kennels of line bred setters, teams of which quartered the moors for grouse in the shooting season, but all including the other famous Llewellyn strain, was founded on Edward Laverack’s stock.

Initially English Setters were bred to drive the birds towards a place where, when the birds were mesmerized by a setter on point, keepers could cover the birds with a net, sort out the fully grown birds for the pot and release the rest to mature.

These days, with the invention of a sporting gun, birds are raised to maturity, then released and all are shot. This was a fresh and welcome source of winter food.

Evolution Of The Head & Neck

Let us first consider the head and neck of an English Setter.

1872 Standard “The Setter.” By Edward Laverack.

I will commence with the HEAD, which should be long and rather light, though not too much so. I do not like a heavy-headed or deep filled dog, it indicates sluggishness.

NOSE, large, black, moist, cold and shining, slightly depressed in the center, prominent and expanded at the nostrils.

The NOSTRILS should be open.

EYES bright, large, full, mild and intelligent, and free from rheum or discharge, in color dark hazel, but these will be darker or lighter according to the color of the dogs.

The EARS set low on the head, and flat to the cheeks, they should be rather longer than otherwise, not too pointed, and thin in the leather: A prick-eared dog is unsightly; it gives him a bad appearance, and not the roundness of head as when the ears are low set on, and back.

The NECK should be muscular and lean, slightly arched at the crest, and clean-cut where it joins the head: towards the shoulder it should, of course, be larger and very muscular, not throaty, or any pendulosity below the throat, but elegant and blood-like in appearance.

MUZZLE moderately deep and fairly square, from stop to point of nose should be the equal length of the skull from occiput to eyes.

NOSE, Black or liver, according to the color of the coat.

EYES, Oval and not protruding. Bright, mild and expressive. Colour ranging between hazel and dark brown, the darker the better. In liver beltons only, a lighter eye is acceptable due to a complete lack of color pigmentation.

NECK. Rather long, muscular and lean, slightly arched at the crest, and clean-cut where it joins the head, towards shoulder larger and very muscular, never throaty nor pendulous below the throat, but elegant in appearance.

As you will see, the basic standard remains virtually the same except with the definition of the dog’s mouth where now a level bite is no longer accepted but a true and complete scissor bite is required. This has been difficult to breed out over the years and still, the odd puppy turns up with a level bite which often cannot be wholly evident until they are at least four months old.

Heads in America seem to have become over lean and I don’t mean snippy, and differs from that which we breed for in England, which is well-chiseled containing brain room.

Eyes should sit well under the eyebrows, dark and be smiling at you with the expression only a setter can have.