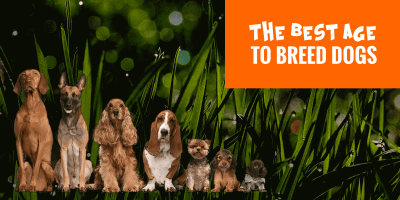 Factually, male and female dogs can breed as soon as they sexually mature which is a little before a year of age generally. However, is this the best breeding age for dogs? Well, no, it is not. Fertility is far from being a binary concept.

Indeed, fertility in dogs and knowing when the best breeding age is for a particular dog are very much dependant on several factors; including a dog’s health, size, age, and sex. We all know that small dog breeds become sexually mature much earlier than giant breeds, for example.

Just a quick warning: this article is not about when do heat cycles occur in bitches, or how many times can you breed a stud dog, or back-to-back breeding. Click on these links to read those articles if this is what you are after.

This article is about the three different periods in a dog’s sexual life, whether it is a male or a female:

Unlike humans, female dogs do not go through menopause but their fertility decreases sharply passed a certain age. A dog breeder who owns a sought-after stud or dam should avoid breeding them past their prime, and before their prime. Such breeders could be unsuccessful and carry a higher risk rate for stillbirths and low puppy counts.

The question we first need to answer is amongst all the factors in a dog’s genetics and environment, what does factually and scientifically influence a dog’s fertility? By fertility, I mean both the general quality of a dog’s sexual reproductive organs (sperms, eggs, ovaries) but also… at what time in a canine’s life is the quality the highest it will ever be?

Size of the Dog

Reproduction in dogs is an ingrained cycle of the species from its wild canine ancestors. Wolves, for example, reach sexual maturity at two years. In domesticating dogs, humans have created breeds through selective breeding.

The genetic tinkering that created breeds has, also, created significant changes in the reproductive cycle. Smaller breeds reach sexual maturity earlier than large and giant breeds. The average for toys is six months; the average for giant breeds is eighteen months. The average for all dogs is one year–a not very reliable average since there is such a big range among breeds. It is, however, fair to announce an average for a breed since most dogs falling within a particular breed are expected to have a similar body size.

Sex of the Dog

In general, male dogs become sexually mature at an earlier age than bitches. Or at least, male dogs are sexually capable at an earlier age than females, which is different than being sexually performant. Bitches usually have their first heat at six months to a year. Dogs may be able to sire at five months. Large breeds are later for both sexes. Bitches of large and giant breeds may not have the first heat until a year or eighteen months.

Dogs once sexually mature will be able to mate every day of their lifetime. The amount and quality of sperm will be less at the very beginning and the very end of a dog’s life. Damage to the sperm from the aging process, disease or exposure to toxins can affect both their viability and vitality.

The viability of sperm means how many spermatozoids are able to fertilize an egg, fully operating, and not so damaged that they could not inseminate an egg. Vitality or motility of sperm refers to the ability of sperm to move to and penetrate the eggs. This vitality becomes curtailed as the dog ages. The amount of seminal fluid in an aging dog may be decreased by such common conditions like an enlarged prostate. Mating a dog too many times in close succession, also, can reduce the number of sperm available for fertilization.

Bitches will continue to have heats for their lifetime, they do not experience menopause as women do. Nevertheless, the older the bitch is the lower the viability of her eggs. The aging process, chronic diseases, and environmental exposures all diminish a bitch’s fertility. In addition, genetic mutations become statistically more likely towards the end of a female dog’s life.

Health of the Dog

Fertility of dogs can vary from dog to dog, even if they are of the same sex and size. Infections of the reproductive tract, as well as sexually transmitted infections, in both dogs and bitches, can negatively impact fertility, and even reduce it to null at times. Tumors in the testes of a dog or in the ovary of a bitch could cause sterility. Also, the treatments for cancer in other parts of the dog’s body (e.g. lymphoma) may render an animal sterile. Genetic mutations are possible in any dog, too.

And then, some dogs just aren’t as fertile as others for unknown reasons. Diet, weight, unknown genetic makeup, all are potential reasons for unsuccessful breedings. Temperament or personality of an individual dog may incline any particular dog to mating behavior and subsequent successful breeding.

A dog is generally referred to as a puppy before the age of a year. By definition, a puppy should not be sexually mature since it is still growing. Puppies, though, are sexually capable after few months of age and can (and do) produce puppies while still growing themselves.

Bitches should be at least two years old before being bred. Bitches that are not fully mature are more likely to have smaller litters and are more likely to have stillbirths. Bitches should have at least two normal heat cycles (some experts say four) prior to a first mating. Bitches that have not yet reached adult size will, also, be more at risk for delivery issues like dystocia which may end up requiring an emergency C-section. The risk of a surgical delivery of puppies comes not only from the surgery itself, but also the complications arising out the use of dangerous anesthesia medications. All of these risks may be eliminated by allowing a bitch to finish her own puppyhood before subjecting her body to the demands of a canine pregnancy, i.e. responsible breeding.

Male dogs of the large breeds need to reach full size, and the breeder should avoid stud services before two years of age. It is very important for males of the large and giant breeds to complete their own growth before siring puppies. Heart problems and hip and elbow dysplasia are more common in the large breeds. Some of these problems will not surface until a dog has reached its adult size. Dogs that have genetic problems especially related to growth like Wobbler’s syndrome and hip/elbow dysplasia will not be good candidates for breeding. OFA does not certify a dog until it is at least two years of age. An owner of a bitch that contracts for stud without OFA certification in one of the predisposed breeds does not harm the stud but may be needlessly jeopardizing a valuable bitch and a litter of puppies.

The American Kennel Club will not accept the registration of a litter of puppies if a dam was less than eight months old or the sire less than seven months old at the time of mating. These ages are the floors for what the AKC deems responsible when breeding dogs. They are by no means the ideal for most dogs and animal rights activists. They are also too low for the breeder to have enough hindsight and data on his own dogs’ health.

Bitches do not become infertile at the end of their lifespan, they do not have menopause. As bitches age, they have a decline in health, and in general, the size of the litters decrease sharply. There is, also, an increase in the likelihood of stillbirths and genetic problems. Bitches that delay breeding past the third year run the increasing risk of developing pyometra—a life-threatening infection of the uterus. There is, also, differing opinions on how many litters a bitch can safely have over her lifetime. In some places (U.K. for example) there is a lifetime limit of six litters and moves to reduce the number to four. It is unclear how much of this move is due to sound veterinary science or political gamesmanship. The UKC, also, prohibits bitches more than eight years old to breed. The AKC will not accept litter registration from bitches or studs of 12 or more years at the time of mating.

Male dogs may have more difficulty with mounting as they age. As male dogs, age arthritis may make mating increasingly painful. The ceilings of 12 years (or 8 for bitches in the UK) does seem to be a bit arbitrary. It is unclear what would be the major issue with a 13-year-old Pomeranian (with an average lifespan of 16 years) continuing to stud. The fact that the ceiling of twelve years is set for bitches and dogs is probably a good indication that it is somewhat arbitrary at least for the dogs.

The rule of thumb for females is to stop breeding as soon as the breeder notices a sharp decrease in the litter size. For studs, freezing high-quality semen from his peak is much more recommended than breeding the same dog at 13 years of age.

The best breeding time for dogs is the time when the age, health of the bitch and the dog are at the absolute best for producing as many healthy puppies as possible, with the least detriment to the bitch and dog (during mating, pregnancy, and nursing.)

This window of perfect opportunity for large breeds is much shorter than smaller or toy breeds. The average lifespan of breeds like Great Danes, St.Bernards, and the likes is about 8 to 10 years. Toys on average have quite a few more years, with a lifespan of fifteen or more years. Plus, small breeds become sexually active much earlier so it’s a double win for them.

The later sexual maturation, the longer time between each heat, and large puppy counts, all make females from a large breed very unproductive in comparison to smaller breeds that recover faster from smaller litters, have more heats in their lifetime, and start their sexual life earlier, too. According to the UKC and common sense, four litters will be the maximum most (large) bitches will be able to produce, and still remain healthy.

For example, a large bitch will have a litter at two, four, five, and six. An eight-year-old Great Dane bitch is a very senior dog, and not all eight-year bitches will have the health capable of supporting a pregnancy. Serious conditions like eclampsia which can be life-threatening for the bitch and her puppies become more common as a bitch ages.

Male dogs may breed throughout their lifespan. There is no reason to end a stud’s career because of age alone. A healthy dog should be able to pass along his genetics. Prostate problems are a relatively common problem in older dogs so, after a certain age, senior male dogs should undergo regular veterinary checks. Infections can oftentimes be treated and declining fertility restored. Mobility issues such as the pain of arthritis can, also, be treated with steroids and pain medications.

All dogs as they age become more exposed to infections and illnesses. Some infections may be symptomless. Brucellosis is a sexually transmitted disease in dogs, and all dogs should be tested for this disease prior to mating. It may be symptomless, but its impact on a litter of puppies can be nothing short of devastating. It can cause spontaneous miscarriages, abortions, and the stillbirth of puppies. It is usually not a curable disease so prevention to exposure during the prime years of a dog’s breeding life is key. Good veterinary care throughout a dog’s prime time in life is essential for the best outcomes for both the mated pair and the litter they produce. Pregnant bitches should, also, not be exposed to medications unnecessarily or to environmental toxins (i.e. cheap diets and dodgy health supplements.)