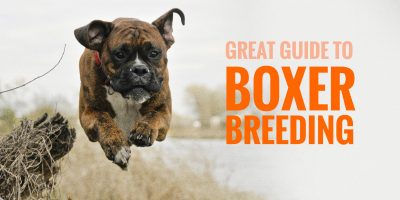 Breeding Boxers is a rewarding adventure but it has to be taken seriously. Boxers are extremely active dogs with a bright mind. They are known to be very loyal and loving, making them the perfect family dog.

Consistently part of the American Kennel Club’s top breeds, Boxers are in every person’s mind. We just know how they look and how great they are. This affection does not mean we should go ahead and breed boxers. Dog breeding should always have a goal and an ambition — bettering the breed, one litter at a time!

If you are wondering how to breed boxers, you’re on the right page in the right website. First and foremost, we will give some context about the breed and then understand the health concerns to avoid from today onwards.

This article is a meaty preview of what you will find in our bestseller, The Dog Breeder’s Handbook.

The Boxer is and has always been an agile medium-sized breed with a square-built head and body. A big emphasis is put on the Boxer’s harmonious proportion of muzzle to skull, short back, strong limbs, and short, tight-fitting coat.

The breed of Boxer dogs originated in Germany towards the end of the 19th century by German breeders Roberth, Konig, and Hopner. The Boxer was originally a cross between the English Bulldog and the Bullenbeisser, a Mastiff-type dog working as a bear, deer and wild boar hunter for centuries. Today, the Bullenbeisser is an extinct breed, mainly because it has been crossbred too often for too long and diluted itself over generations.

An enormous amount of German blood was used throughout the first boxer breedings because breeders wanted to get rid of the excessive white color in the breed.

The Boxer was first used for bull-baiting but quickly became a great all-rounder working dog thanks to its agility and speed. Boxers soon became butchers’ best friends, gathering cattle in slaughterhouses but also protecting them from external threats.

The Boxer was officially recognized by the AKC in 1904. The consistent importation of Boxers in the United States of America only started after World War I, and the Boxer’s rise in popularity started from World War II. It even became one of the very first dog breeds to be employed as Police dogs.

Originally, any dog within Boxer breed had to have a docked tail and cropped ears. Boxer lovers and ambassadors always stood by their position that they were cosmetic alterations that were adding depth to the Boxer’s appearance and character.

Over the last decade or so, animal rights activists like PETA and veterinary associations asked for a plain and simple ban both practices. To them, cropping a dog’s ears and docking a dog’s tail are extremely painful and cruel while bringing no improvement to the dog’s life. Therefore, it should be banned and considered animal cruelty.

Several countries have indeed banned these practices but the United States, Canada, South Africa, and several other big nations haven’t applied any restriction as of today, 2017.

In the United Kingdom, a new sub-breed of Boxers was proactively started with a naturally short tail. The bobtail Boxer was developed in the United Kingdom in anticipation of a tail docking ban that indeed came into place since then.

Kennels clubs of different countries have their own views and rules on docked tails and cropped ears:

Docking the tail of a boxer and cropping his ears are performed before the puppy’s cartilage is fully formed and hard — usually between 3 to 6 days old. No anesthesia or sutures are required when the surgery is performed that early.

How To Breed Boxers

With Boxers, the average litter size is 6 to 8 puppies per litter.

Organizing an X-ray at your vet a few days before whelping is generally the most accurate way to know. Remember that during the first couple of years, a Boxer bitch may not be fully fertile, therefore the puppy count may be way below the average. The same goes for once she becomes older and her progesterone levels decrease.

Just like with any other breed of dogs, gestation lasts around 63 days or 9 weeks. A clear loss of energy is to be expected from the pregnant Boxer bitch during that time and during the nursing of her newborn litter.

As with most breeds, the rate of inbreeding was at its highest in this breed in the 1980s, representing a genetic bottleneck, with genetic variation lost from the population. However, since the ’90s inbreeding has slightly declined, implying maintenance and even some replenishment of genetic diversity; possibly through the use of imported animals. (source)

The actual mating and breeding of Boxers is the very same as any other breed and is clearly broken down in our bestseller, The Dog Breeder’s Handbook.

The Boxer has a healthy life expectancy with a lifespan average of 9 to 15 years.

A serious study by the University of Georgia has taken place over 20 years (1984-2004) and looked at 82 dog breeds with at least 100 individual dogs within each breed. All in all, this was a study monitoring 75,000 dogs in total. Following this study, the main causes of death for Boxers included:

The Boxer is a breed affected by several genetic conditions that we are reviewing here below.

Aortic Stenosis is a partial obstruction to the regular blood flow in the dog’s heart while it streams out from the heart’s left ventricle through the aorta. It is regarded as the most prevalent cardiovascular disease in Boxers and any boxer breeder has to pay close attention to it.

Because the blood flow is dangerously reduced, aortic stenosis requires the dog’s heart to work a lot faster and a lot harder than a healthy dog. Therefore, the dog’s heart naturally fatigues earlier in the dog’s life, depending on the severity of the blockage.

Boxers suffering from an abnormal heart rhythm can suffer sudden death. However, no need to hit the panic button immediately, a lot of boxers affected by mild aortic stenosis manage to live a long and happy life.

Thought to be inherited genetically, the aortic stenosis’ inheritance pattern has not yet been clearly understood. It is thought to involve multiple genes and it definitely targets the Boxer breed much more than other breeds.

As recommended by the Universities Federation for Animal Welfare, Boxers should be checked for heart murmurs, and those with grade 3 murmurs or higher should never be allowed to breed. For now, this is the only way we can breed the condition out of our future Boxer bloodlines.

Renal Dysplasia or Juvenile Kidney Disease is a name given to a group of genetically-rooted medical conditions resulting in abnormal development of the kidney in the young Boxer. Such kidney failures usually start appearing around 1 year of age but can start being clinically visible only later in the dog’s life.

Except in cases where a sufficient amount of kidney cells develops into the adult stage, impacted dogs are set out to encounter severe complications with their kidney function. Recovery is very unlikely and affected dogs are almost destined to be put down within weeks of the initial diagnosis.

A proven DNA test is not yet available, therefore the best way to avoid juvenile kidney disease is to breed from two parents who haven’t shown any symptoms as of yet. Around 2012, a DNA test was made available based on a study that was released in 2011 but the study’s editors expressed clear concerns subsequent to publication. The DNA test based on that study should be taken with a lot of caution and probably ignored.

With its real name, the Arrhythmogenic Right Ventricular Cardiomyopathy is a heart condition particularly affecting the Boxer breed. Boxer Cardiomyopathy causes the Boxer’s heart to faint, fail and can also lead to sudden death.

Because cardiomyopathy often takes years to progress to a lethal stage where symptoms may start appearing, puppies are rarely affected and the disease will commonly appear in the middle age — between 5 to 10 years of age.

Cardiomyopathy is extremely difficult to diagnose during regular veterinary examinations. The best way to confirm whether or not a Boxer is affected is by wearing a Holter Monitor for 24 hours to monitor and record abnormal heart rhythms. Medication can be given in order to stabilize and control the arrhythmia.

Genetically inherited, progressive axonopathy is a neurological disease affecting the nervous system of Boxer dogs exclusively. Similar conditions are found in other breeds. Boxer neuropathy results in a gradual loss of sensation to the limbs as well as reduced patellar reflexes.

To produce an affected Boxer puppy both parents must be carriers of the wrong gene. If only a single parent carries that wrong gene, the puppy may become a carrier but it won’t be personally affected. If a carrying puppy mates with another affected Boxer or a carrier, the resulting litter may include affected puppies.

There is no known treatment for this condition and because of the hereditary nature of this condition, affected dogs should not be used for breeding.

The Boxer is closing the top 10 of America’s most loved breeds, but it lost 3 places in just five years, being now behind the Poodle and Rottweiler. A lot of new breeds appeared or gained in popularity over the last years — such breeds include the American Bully or even other bully breeds — perhaps at the expense of the Boxer breed.

When thinking about breeding boxers, health should be your first concern since a few genetic diseases are known to affect this breed in particular. Having no DNA testing available means effort and screening have to be performed by reputable Boxer breeders in order to clean up the future bloodlines.

Boxer breeding is like breeding any other dog breed: complicated, costly, but incredibly fulfilling. You can learn more about Boxer breeding with our bestseller, The Dog Breeder’s Handbook.