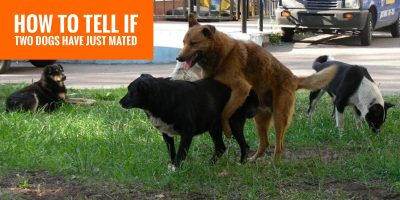 A lot of breeders and non-breeders try their best to avoid accidental matings of two dogs. Often, breeders are properly prepared but unfortunately, sometimes two dogs are left together either by mistake or by lack of attention. This article explains to you how to tell if two dogs have mated.

First off, let me tell you that it is extremely complicated to accurately state whether or not two dogs just mated. If you catch them during the coitus, it’s obvious and you will immediately know and prepare for confirming the pregnancy or undergoing a dog abortion. If you are wondering how to know if two dogs just mated, you probably arrived and surprised them being close but did not actually see them do anything.

Regardless of the outcome after reading this article, make sure you monitor the female over the next days and weeks because you may simply be wrong if you think they did not mate.

The mating of two dogs usually lasts anywhere from five minutes to half an hour. Mating in dogs is longer than what most people think and it’s not unusual to see ties lasting close to an hour. So if you let the dogs together by mistake for a couple of minutes, you can usually assume that they did not do anything naughty.

Now, if you let the dog for over 15 or 20 minutes, then you should definitely get worried because if both dogs were willing, they could have done it. Here are some signs of mating in dogs so you can know if two dogs mated.

If your female dog looks particularly damp around the head and neck and it hasn’t been raining, she may have been wooed by a male dog. Dogs are highly intelligent, social creatures and “wooing” is another way of describing their canine seduction techniques. Believe it or not, in the dog world wooing involves a lot of licking of the fur! They may also nibble each other’s ears and nuzzle each other affectionately, like flirting behaviors in humans. To humans, the dogs may look like they are in love! (Are they?)

The male dog also tends to spend a lot of time sniffing the female’s vulva and anus and will follow her around before mating. He may make a few failed attempts at mounting the female dog from behind before the final big event. If you witnessed your dog engaging in this behavior, followed by any of the signs listed here, there is a strong possibility both dogs have just mated.

After a mating session, your female dog may have a particularly strong smell around her vulva. This scent will be different from the scent she has during her heat cycle. If your dam smells odd and she has been around an unneutered male dog in the last few minutes, she may have mated! If you are worried, seek advice from a vet who can advise you on the next steps.

It may take some time for a dog’s erect penis to become flatulent and return inside its sheath after he has mated. The amount of time it takes for this to happen varies depending on the individual dog, but it is usually minutes. Dogs get aroused for many reasons that are not always linked to sex. Neutered dogs may still get random erections even though their desire to mate is significantly lower than that of intact male dogs.

You may notice your male dog gets an erection when playing with his squeaky toy or when he knows he is going out for a walk. Sometimes he may even be sitting doing nothing. Erections can occur because of sexual arousal, but also due to the general excitement and anatomical abnormalities. Just because your dog’s penis is still very erect, it cannot be guaranteed that mating has occurred.

Sometimes after mating, a male dog’s penis may remain stuck outside of its sheath and appear abnormally swollen and enlarged — this could be a major tell-tale sign he has mated. In this instance, the penis is struggling to return to its normal position. This is usually due to swelling of the bulbous glandis inside the penis – if the glands swell enough, the outer skin will no longer cover the penis, leaving it exposed. This swelling usually occurs once the penis has penetrated the vaginal canal and reduces once intercourse is over. For some dogs, the swelling may take longer to go all the way down. If this happens, try soaking the exposed penis in a sugar water solution. If the problem persists, contact your vet for advice.

Dogs rolling around on the ground

After a dog has finished mating he or she may rub themselves along the ground or roll around on their backs. It tends to be male dogs who exhibit this behavior, but there is a lack of solid evidence about why they do this. Experts suggest that male dogs roll around because they are in a state of “ecstasy” after mating. Their rolling almost acts as a victory dance because they are satisfied with the activities they have just performed.

Research has also suggested that a male may roll around to leave his scent and bask in his masculinity. Experts suggest that testosterone levels in males rise after sex, so their desire to leave their scent may be greater. However, dogs also roll around if they have an itch or they are rolling in something smelly – assess which one of these options is most likely before assuming that your dog has been sexually active.

Whilst male dogs tend to roll around on the ground after mating, female dogs do something entirely different. Females tend to walk away and keep their distance! Dogs don’t lie down together and cuddle after mating like humans often do. They simply do the deed and go their separate ways until the male decides he is ready to mate again (rarely with the same female, though). When this time comes, he will usually begin to follow and woo the female as he did before.

If you notice that your dog was unusually close to a dog of the opposite sex and is now completely disinterested, it could act as an indicator that he or she has mated.

When mating is over, a female dog may take a while to return to her normal position or gait. This is completely normal, and it shouldn’t take long for her to correct herself. Any abnormality in your dog’s gait could be an indication of mating, so watch her closely! If the problem persists and your dog appears distressed, contact your vet for advice.

You may also notice that your dog (either male or female) is quieter than usual and spends a little more time sleeping or lying down. This is another potential indicator of sexual encounter, but not one to worry about too much – dogs find mating quite tiring and often need time to rest and relax afterwards.

Dogs will be dogs, but they are still very hygienic in their own highly organized way. Both male and female dogs will lie down and thoroughly lick their genitals after a sexual act has occurred. The female will clean her vulva, whilst the male will clean his exposed, erect penis whilst helping it return to its normal position inside its sheath.

Dogs will regularly and systematically lick their fur and genitals to clean themselves whether they have had a sexual encounter or not – it’s their very own version of a shower! But, if you notice the licking, along with any of the signs listed above, you may be witnessing their attempt at trying to freshen up after mating.

You may have noticed that your dog is suddenly much calmer and less frantic. Male dogs, especially young unneutered ones who are still developing hormonally can have an overwhelming desire to mate when they smell a bitch on heat. The desire may be so strong that their behavior appears agitated and desperate. He may constantly follow her around, will often try to mount and hump her and may even whimper or whine when he doesn’t get his own way.

If this frantic behavior suddenly disappears and he appears relaxed and disinterested, there is a chance he may have mated. In many ways, you must play the role of detective. If you think your dog has engaged in intercourse – study his or her behavior carefully and try to piece clues together.

If you have a female dog and are still unsure, continue to watch her behavior over the coming weeks. When she has been successfully impregnated, she will start to exhibit new signs of pregnancy (e.g. she may gain weight or go off her food). Dogs are a constant puzzle, so be sure to pay attention to her behavioral and physical changes to get hints of a pregnancy getting started.

Dogs who stick together

In some ways, it may be quite difficult for it to go unnoticed that your dog has mated. The act itself is highly unusual and is not as quick as you may think, making it difficult for your dog to have a quickie behind your back! Although mating starts off mimicking human intercourse with a lot of wooing and mounting, it then takes quite an interesting turn (literally, ha!)

While the erect male penis is inside the female dog’s organ, the bulbous glandis at the head of his penis begins to swell. It becomes large enough that it is almost impossible for the stud to withdraw his penis from the narrow vaginal canal. This is sometimes known as the lock or the tie phenomenon – as crazy as it sounds, the female dog locks the male’s penis inside her vagina.

The vaginal lock remains in place for an average of 15-20 minutes but in some instances, it can last up to 30-40 minutes. While this is happening, the male usually steps down from his mounted position, twists around and turns his back to the female. The two dogs then stand with their rear ends touching whilst the penis ejaculates semen into the female organ to attempt to impregnate her. Some dogs may even scream when mating.

To the human eye, this act may look very odd and may even look like the dogs aren’t doing anything. If you see your dog standing rear-to-rear with another dog, he or she is mating and may even be coming towards the end of the act. Once the act is over, the bulbous gland will begin to reduce in size and the penis will be freed from the vaginal canal.

In general, you should always keep an eye on your dog and avoid unsupervised mating. The lock process in some circumstances can cause injury to one or both dogs, which in extreme circumstances can be life-threatening. Never leave two unneutered dogs of the opposite sex alone with no supervision if you want to avoid any mating. So, how do you know if two dogs have mated? Check whether or not the dogs are close, behaving differently, rolling around, licking their genitals, and assess the situation.