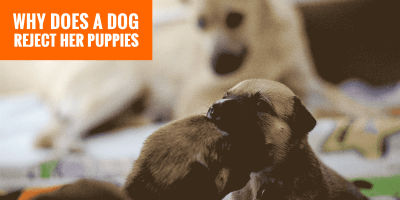 As much as you may want to avoid thinking about your dog rejecting her pup(s), it does happen — a dam’s maternal instincts don’t always kick in postpartum. If you want to have the best chance of protecting her pup(s), you should know which clues to look out for in advance. Without your intervention during rejection, your dam’s puppies may die — chances are, you will have to play the role of mother dog for a while and nurse the puppies yourself.

Yes, a mother dog can reject her litter and turn on her puppies. This may happen because she feels unwell herself, or because a puppy seems too weak to be worthy of her care, or simply because of a lack of maternal instinct. Such behavior may appear from the moment she has given birth, or a few days or weeks later. This is why a dog breeder should devote enough time, every single day, to monitor the health of each puppy. Use puppy forms to log each whelp’s weight over time and make sure it grows steadily.

Be aware that when a dog mother ignores her entire litter, things get obvious very rapidly: they all cry because of starvation so to get her attention. You will generally be alerted. However, if she ignores a single pup, you may miss these alarming signs.

What Are the Signs of a Dog Mother Rejecting her Puppies?

One of the most common signs to look out for is the absence of licking. Usually right after a litter is born, a dam will immediately begin licking each pup. This is usually the first indication that she cares about the welfare of each one. In dog language, licking is often a way for the mother to mark her puppies with her scent and claim them as her own. It can also be a way to stimulate them to pee or poop or to merely clean them. Put simply, licking is a mother dog’s way of loving her puppies — if she doesn’t lick, she may be rejecting them!

Another obvious sign that a mother wants nothing to do with one or more of her pups is when she spends time away from them. It is usually difficult to separate a mother and her litter — maternal instincts are usually so strong that she will not leave her puppies other than to relieve herself. If you see your dam, sitting or lying away from her litter with visible indifference, this should alert you to possible rejection.

As well as a mother dog feigning interest in her pup(s), there may also be signs of clear distress from both parties. Newborn puppies are not like newborn babies who cry often, to indicate their needs. Newborn pups spend most of their time sleeping and eating every couple of hours — therefore, they spend most of their time cuddled up against the mother dog’s tummy for easy access to her milk. Puppies who are being rejected will not enjoy this luxury and will often cry loudly due to extreme hunger — their growth will also be a lot slower than normal and they will become malnourished. In some circumstances, the mother dog may also repeatedly pick up her pups and place them down away from her, making her need for distance clear — this is extremely distressing for all involved and will require intervention from the breeder.

In extreme circumstances, a mother may also kill and possibly eat (or attempt to eat) one or more of her litter following rejection. Canine cannibalism or infanticide is usually instinctual and can occur when a mother dog does not recognize her pup(s) as her own. This odd behavior is far more likely to take place after a cesarean section. However, there are multiple reasons why a dam may choose to eat her pup(s) and not all of them are down to simple rejection, so it is important to monitor her closely and keep check of anything that may be cause for concern.

Why Would a Mother Dog Reject Her Puppies?

A lack of maternal instinct is one of the main reasons a rejection will occur — normally this is due to low levels of oxytocin which usually rise during birth. Therefore, dogs who deliver their litter via cesarean section often struggle to exhibit maternal behaviors, instead of behaving aggressively or showing indifference to their offsprings.

A dam may also have all the right maternal instincts to provide her litter, but may still reject a single pup. Sometimes if a pup is unwell with a viral or bacterial infection, has a congenital birth defect or any other disorder that makes it weaker than the rest, a dam may separate it from the rest of her litter. It sounds harsh, but this is her way of ensuring that the rest of the litter does not become infected and/or ensuring that all her resources can go towards the puppies with the strongest chance of survival.

Additionally, a dam may also reject her pup(s) if she herself is sick and unable to care for them as a result. She may still recognize them as her own and have the right maternal instincts, but not be strong enough to nurse them.

One of the most common postpartum canine infections is an infection of the mammary glands, known as mastitis. The infection will cause her mammary glands to become inflamed and swollen — this can be exceptionally painful and will usually stop her from being able to breastfeed her puppies. As a dam owner and responsible dog breeder, you must not allow any pup(s) to attempt to drink milk from infected teats, as it will be toxic.

Some mother dogs also suffer from metritis, which is an infection of the uterus following birth and will often be marked by vaginal discharge, lethargy and a fever. Mastitis, Metritis, and Agalactica (MMA) in dogs can be fatal if left untreated and require immediate attention from a veterinary professional. It will also be your responsibility to care for the mother dog’s pup(s) until she is able to do so herself.

Furthermore, just like human mothers, dog mothers also experience similar emotions following birth. For example, first-time mothers may feel overwhelmed by the entire experience or feel they have too many puppies to care of. If these feelings of helplessness continue to build up, a dam may simply give up trying to look after her whelps and reject them. In addition, she may also feel excessively tired and may not have the energy to care of her litter even if she wants to; her body will still be recovering from the laboring process. Your dogs cannot talk to you, so you will have to pay close attention to the behavior of both the mother dog and the litter — if you have any cause for concern at all, seek help from a vet immediately.

As a dam owner, you should think of yourself as your dam’s second in command or her litter’s second mother. Whatever the mother dog is unable to do for her whelps by way of providing care for them, you must be prepared to step in and do yourself. If your dam has no maternal instincts whatsoever and you see her separating herself from one or many puppies, or even trying to hurt them, you may need to take over as the litter’s full-time mother. For example, by keeping them warm with blankets and towels and hand feeding them yourself by bottle feeding or syringe feeding until further notice. However, there are still various lengths you can go to, to try and stimulate the dog mother’s maternal instincts to kick in.

You may want to try relocating the whelping box so that it is in a calm, quiet (and clean) environment where the dam can care for her litter in peace. If she is more relaxed she may be more likely to release the right hormones she needs to build bonds with her litter. If your dog is particularly attached to you, you might also find that your presence helps her to feel more at ease. If this is the case, try relocating the whelping box to somewhere that you spend most of your time, so the mother dog can be near you as often as possible. This way, you will also be alerted much more quickly to any distress from either the mother dog or the pup(s).

If your dog still appears anxious, you may want to try an Adaptil collar (DAP) which releases synthetic dog pheromones, designed to instill a calming effect in your dog.

If you think the mother dog is rejecting her pups because she is excessively tired or overwhelmed, you should be prepared to aid her in her care wherever possible. Bonding relies on hormones which are usually stimulated during labor, but also during nursing. If the pup(s) do not automatically latch on to the teat you can try introducing them yourself — get your dam to lie on her side and place her pup(s) near her tummy, with their mouths positioned as close to her teats as possible. You may require an extra set of hands to do this so that one person can focus on the litter and the other can soothe the mother dog. Ensure that any help you enlist is from a person that your dam knows and trusts, as not to cause her any added stress or anxiety. If the dam exhibits any aggression during this process, immediately remove the puppies from the situation.

If you suspect that your dam is unwell and this is the cause of the rejection, seek immediate medical advice from a vet. Infections such as mastitis and metritis require antibiotic treatment and can be life-threatening if left to progress — pup(s) should also never take milk from their infected mother. The best thing you can do for a new dog mother and her litter is to stay with them as much as possible to support them and look out for any concerning changes — your observations could save more than one life!