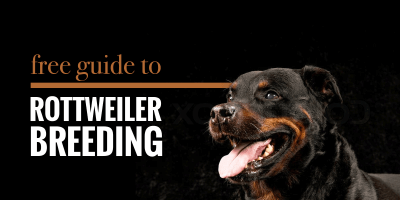 Here you are, wondering how to breed Rottweilers, those courageous dogs officially recognized by the American Kennel Club in 1931. The Rottweiler breed is consistently ranking within the top 10 most popular breeds in the US, as per the most recent rankings. Such high and steady popularity has encouraged a lot of owners to start breeding Rottweilers.

If the thought of owning and breeding Rottweilers has ever crossed your mind, then we have got you covered in this article. First, we are going to cover some historical background of the breed. Then, focus on health concerns to be aware of when breeding Rottweilers. Only to finish with the best breeding practices to move forward with your own Rottweiler kennel.

History of the Rottweiler Breed

Rottweiler dogs are said to have originated from the Roman drover dog and Molossus dog during the Roman Empire, around 74 AD.

The word “Rottweiler” originates from the word “das Rote Wil”. Das Rote Wil was a camp by the river banks of river Neckar, in the Wurttemberg area in Germany. This is where the first Romans to introduce the breed to Germany are believed to have settled.

The Rottweiler was previously known as Rottweiler Metzgerhund in Germany, which literally translates into Rottweil butchers’ dogs. Indeed, Rottweilers were used and selectively bred to excel at pulling carts filled up with meat to go to markets, as well as herding livestock. They had to be strong, powerful, and smart.

After World War I

During World War I, many police dogs were trained and several breeds were converted from their original purpose to more police-related jobs. Such training included draught assistance, guarding, messaging, and sniffing.

The original official breed club was created in 1914 in Germany and was named the Deutscher Rottweiler-Klub which means German Rottweiler Club. The club had recorded around 500 Rottweiler dogs and the emphasis was put on working dogs.

A year later, the Süddeutscher Rottweiler-Klub (South German Rottweiler Club) was also created and had over 3,000 Rottweilers in their records, and the emphasis was put on physical appearance, morphology, and conformation. The SRK soon changed the name to become the International Rottweiler Club.

In 1921, a few years after the First World War, these two main German Rottweiler clubs merged and the Allgemeiner Deutscher Rottweiler Klub (General German Rottweiler Club) was born. The ADRK is the home club of the Rottweiler as we know it today, and they worked hard for decades in order to promote the breed internationally.

In 1931, the influential American Kennel Club recognized the Rottweiler breed officially while in 1936, Rottweilers appeared at the World’s biggest dog show, Crufts. The Rott boomed again in the 1990s and remain strong since then, consistently showing up in the top ten most popular dog breeds.

Let’s cut the long story short about the existence of two different breeds: there is only one breed recognized worldwide, the Rottweiler.

In practice, both countries have experienced slightly different evolutions for the same breed. Germany is known to have very rigid and strict breeding standards, required the dog’s health, temperament, conformation and working ability to all be tested thoroughly. In America, the registration of purebred Rottweilers is a bit more lenient so the breed’s appearance may differ in both countries.

Therefore, it is possible to say that in the same unique Rottweiler breed, there are two types of Rottweiler dogs:

Generally, German Rottweilers breedings are more sought-after since they produce puppies closer to the original idea of what a Rottweiler should be. However, the United States also have wonderful American Rottweilers produced every year.

By nature, Rottweiler dogs are fairly active and energetic breeds. They do not only act as excellent guard dogs, but also a great pet to own thus proving to be an invaluable asset to any homestead.

Now, it is time to get to know some of the health concerns commonly affecting Rottweiler dogs.

If you are considering owning a Rottweiler dog, it is important to get your dogs from a reputable dog breeder. This will ensure that the dog you intend to adopt has no health issues. And if any, then your breeder will let you know how to handle them. Although not commonly prone to illnesses, below are some of the Rottweiler dog’s health problems you should watch out of:

This refers to a certain dog eye disease that affects and destroys the retina cells in both eyes resulting in blindness. Initially, PRA affected dogs develop night blindness when they are 2 to 5 years of age and it later progresses into total eye blindness within a year or so.

Is your dog showing some signs of front-limb lameness? Then your dog is probably suffering from Canine Elbow Dysplasia. This refers to an elbow disease that causes the deformation of the elbow joint which can lead to the damage of the cartilages and bones. Rottweilers are most likely to suffer from this disease due to their huge size.

Similar to Elbow dysplasia, hip dysplasia affects the joint and to be specific the hip joint. It is genetic and usually causes abnormal growth of the hip joint mainly characterized by bunny hopping and limping. A possible remedy to this would include surgery or medical therapy.

Rottweilers are also likely to develop various types of cancers which include lymphosarcoma that mainly results from lymphocytes in the system. You should also check for osteosarcoma which is a bone cancer common in Rottweiler dogs.

This refers to a congenital heart disease which causes the narrowing of the aorta as a result of a scar-like tissue below the aortic valve. It is fatal since it overworks the heart when pumping blood due to the narrow valves.

Before breeding any of your dogs, you should ensure complete health clearance for the most common health conditions. Contact your veterinary practice in order to schedule a series of x-rays and blood work.

A female Rottweiler can give birth to around 8-10 puppies, and multiple factors will influence the size of the litter. Rottweiler puppy care requires a lot of patience, time, money and effort. Just like babies, Rottweiler puppies will look up to you for protection, food, love, and shelter. Make sure you read our most popular page on how to breed dogs.

Grooming is of much importance during the nursing period, and you do want to keep the nursing mother as clean as possible, ditto for the whelping box.

To ensure that the diet is balanced, you need to include the six basic nutrients in his meal: proteins, carbohydrates, minerals, fats, vitamins, and trace elements.

For effectiveness, let your feeding routine for puppies comprise of 4 or 5 small meals in a day once they have been weaned off their mother’s milk. We’ve written two great articles you may want to read:

You should maintain a particular feeding time. This is because dogs love a good routine and this shall increase their enthusiasm and appetite. To satisfy their carnivorous desires, make sure to include muscle meat in their diets. If you opt for a convenient kibble, prefer a grain-free dog food.

[pullquote-right]The same mistake made by a Pomeranian and a Rottweiler will have two very different outcomes, and you, as the Rottweiler breeder has to be accountable and aware of those differences.[/pullquote-right]

It is vital for Rottweilers of all ages to be socialized and trained, starting as early as possible, ideally from their very first weeks of life. Rottweilers are very large dogs and any sudden unwanted movement near children or weaker beings could result in injuries, or worse. Additionally, Rottweilers are extremely powerful and if feeling threatened or anxious, they may react violently which would result in devastating bites.

Rottweilers have pursuing instinct due to their herding past, just like Border Collies. Therefore, you do want to slowly introduce groups of people and animals to your dog to familiarize it with groups of things and beings. Otherwise, you can put your Rott at risk by having it herd cars on the street or other dogs in the park.

In case you are purchasing a Rottweiler puppy from a reputable dog breeder, you must meet face to face and see for yourself how the breeder handles and looks after his dogs and puppies. If the breeder is well-versed, let him mentor you on the things you need to do to start a Rottweiler kennel and raise a healthy and disciplined Rottweiler family.

For any dogs you breed, there are some do’s and don’ts you need to be aware of and the Rottweiler breed is no exception. The same mistake made by a Pomeranian and a Rottweiler will have two very different outcomes, and you, as the Rottweiler breeder has to be accountable and aware of those differences.

Never reward inappropriate behaviors and make your Rottweilers partners rather than disciples: forget about the outdated alpha role! Don’t lose patience when training them. Even when your puppy seems not to be getting comfortable with your friends or around your hanging joints, don’t try to rush them too hard. They are just being dogs and you need to be patient with them.

Over the years, the rank of the Rottweilers has been climbing the ladder of the best and most popular dogs in the U.S. Back in 2016, the Rottweiler’s popularity has skyrocketed to put him as the number 8 best and most popular breed in the U.S. This growth has created a massive demand for the breed and marketplaces are now flooded with low-quality Rottweiler-like puppies bred by puppy mills.

As explained throughout this article, breeding Rottweilers is not an easy job because of the time and effort to put into each breeding and into growing kennel reputation. When thinking about how to breed Rottweilers, you need to understand that such a journey takes years to be perfectly mastered. Understanding your female dogs will take time and profitability, or the lack thereof may cut your ambition short.