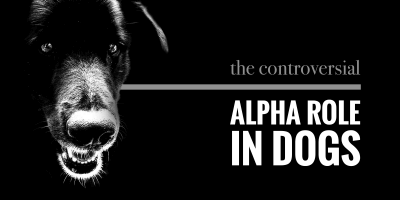 Being an alpha dog is defined as being the highest ranking male or female animal in a social group. An alpha dog can usually be recognized by the submissive behavior of the other animals in the group towards it. In other words, the alpha gets the most sex, the best food, and the best place to sleep.

Since dogs are pack animals and have instinctively been organized in social groups to survive and thrive, the alpha role is arguably part of the equation. Some dog breeders believe that such hierarchized configuration is obvious when involved in dog breeding and owning several dogs under the same roof.

But let’s start by understanding the historical context of what being an alpha male means.

[pullquote-right]Plenty of animal species do have social hierarchies where the strongest male rises to the top, but canids like wolves and dogs generally don’t operate like this.[/pullquote-right]

Between the 1950’s up until very recently, it was commonly accepted that wolves had a social hierarchy comprised of family and non-family members, with an alpha as the leader of the pack. People thought that he would come to his position by force, being the most “dominant”. It was thought that the rest of the pack members, while usually subordinate, would occasionally attempt to challenge the alpha male by force in order to take over his position. Sometimes, supposedly, a challenger wolf would oust the old alpha and become the new leader through virtue of being the strongest and most aggressive.

By extension, we thought that dogs also had similarly structured packs and would challenge each other for dominance. However, the current scientific consensus is that this was a mistaken belief. There are plenty of species of animal that do have social hierarchies where the strongest or most aggressive male rises to the top, such as gorillas and chimpanzees, but canids like wolves and dogs generally don’t operate like this.

Most wolf packs consist of family groups with the parents in a leadership role and the young offspring as the dependents. Their hierarchies are a lot more rigid with the parents firmly in control. There are clear rules in place that are enforced by the parents, but they rarely have to use physical force to achieve this. Rather than challenging the parents for dominance of the pack, the subordinate offspring will reach maturity at 3-4 years of age and leave to establish their own families.

In the past we thought that dogs descended from modern wolves and although they are very closely related, scientists now believe that domesticated dogs and wolves share a common ancestor.

In 1950, a morphological study called On a Dog Skull of Stone Age in Japan and its Ancestral Form, examined Japanese prehistoric dogs in comparison to modern wolves and concluded that “the living wolf kinds have nothing to do with the ancestral forms of the prehistoric dog races.” It’s now known that there are large psychological and physiological differences between dogs and wolves, and we can no longer use wolves as a reliable reference to understand dog behavior.

So what does all this mean for our pet dogs, the beloved canis familiaris?

Well, for a start it means that their social structures are very different from what was originally thought. In dog packs there is no constant alpha, and there is no one single dog who gets all the sex. There are definitely dogs who command more respect than others, but they don’t generally do it by being the most aggressive or intimidating, they get their respect by being implacable and confident.

An aggressive dog is an aberration, and rather than kowtow to it, most dogs will know it’s unbalanced and will actively avoid it as much as possible. The difference between a dog who is respected and one who is feared is obvious in the attitudes of the dogs around it. Now I’m not denying the existence of behavior that appears dominant, I’m only saying that the explanation for such behavior is more than the dog simply wanting to be the alpha or “in charge”.

I’ve seen spoiled dogs who are the boss of their household, with subordinate humans – but the dog is never happy with this arrangement and it did not get to that position by consciously trying to take over. Rather, it exhibited antisocial behavior which its owners didn’t deal with properly, through lack of knowledge or laziness. They’ll continue to indulge its bad behavior because it’s easier than addressing it and potentially creating conflict. It might have barked to receive its food, and been rewarded for this, creating a barking problem; but that doesn’t mean it barks because it wants to dominate. It might be possessive and guard its toys and its food, but this doesn’t mean it thinks it’s the alpha, it just means that it’s displaying an inappropriate survival instinct.

Nowadays behaviorists and scientists no longer explain all of a dog’s behavioral problems away as issues with dominance. We recognize that their impulses and motivations are more complex and can be caused by insecurity, anxiety, stress, or lack of experience to name a few. We also understand that we can’t solve those behavioral problems just by being more dominant.

To give an example, the “alpha roll” is a favourite manoeuvre among some owners. It involves grabbing an over-excited or aggressive dog and forcefully holding it on its back while it thrashes and struggles, eventually calming down and lying still. While this is an imitation of what adult dogs will sometimes do to particularly annoying puppies, it’s not something a human should ever do to a dog.

The main complaint I, as a trainer, have with methods like these is that you shouldn’t be reducing yourself to the level of physical competition with a dog. As highly intelligent hominids, humans are smart enough to be able to outwit the simpler-minded dog without ever resorting to force. When you struggle to hold a dog on its back, or forcefully pull on its leash while it drags you along, or hit it, or try to intimidate it; rather than telling your dog you are in control, you’re actually telling it that you’re on the same level and encouraging it to compete with you as an adversary.

We don’t want our relationship with our dogs to be adversarial; we want it to be cooperative. As such, any action we take against problematic behavior in our dogs has to keep that spirit of cooperation intact.

It’s not always wrong to punish a dog; but when you do punish, you should always make sure that you’re doing it to methodically eliminate disobedience, not just to feed this nebulous notion of being the pack leader. Punishment should never be used unless the dog fully understands what it’s doing wrong and how it can avoid the punishment by doing the right thing.

Generally this means that it’s only appropriate to use punishment in response to disobedience, and not as a way of stopping problem behavior caused by negative feelings the dog is having. This means that you absolutely shouldn’t punish a dog for reacting aggressively to another dog, or for guarding its food, or whatever other problematic behaviors it has. Instead, using psychological methods to remedy behaviors like these is always more effective and always healthier for the dog’s brain in the long run.

If used improperly and the dog doesn’t understand why it’s receiving punishment, it may develop further problematic behaviors or it may even develop “learned helplessness”, where it shuts down in fear of the coming punishment.

You Are The Boss

You are your dog’s boss, or master, or leader, or whatever else you want to call your rightful position as a human. You do have to make sure the dog understands this relationship dynamic and does as it’s told. You are the human who understands a world full of cars and chemicals and laws – things that can easily maim or kill the simple dog who totally relies on you to educate it on how to interact with a modern society.

You decide what food it eats, how much exercise it gets, who it meets, what it learns, where it goes in your house, when it takes a bath, what medication it takes. You even eventually decide when it’s time for it to die. But you don’t maintain this position by being an adversary and you’re not the alpha who wants to get access to all the best stuff.

Written for Breeding Business by Josh Crampton — feel free to get in touch on Instagram.