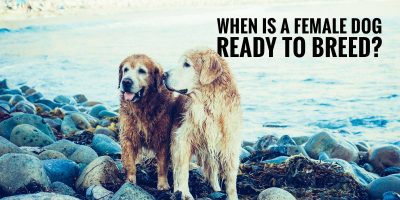 A female dog will be ready to breed after her second heat at every estrus stage of her heat cycle. In other words, a dog breeder should let the first two heats pass so the bitch may be bred at her third heat cycle if she has been cleared from any health concern.

The third heat in a bitch is usually the start of her prime time in terms of fertility in dog breeding. Her body and support system are fully ready to go through the hardships of pregnancy and nursing. Her hormone levels, precisely progesterone levels, have now reached the optimum level to facilitate a successful mating as well as preparing the uterus for the healthy growth of each embryo.

Many people getting started with dog breeding are wondering when is a female dog ready to breed? — and it’s a loaded question! The above is a simplified answer that can serve as a guideline.

What is the best age to breed a dog?

Generally, a year and a half or two years old are the right time to breed your bitch. She will have reached full sexual maturity and is now able to cope with a tough pregnancy. However, the best age to breed a dog depends on the dog’s size:

Therefore, recommending an age is difficult since the numbers mean different things for each breed. However, we do recommend waiting for the third heat to start breeding your female dog.

What day of her heat should I breed my bitch?

A female dog’s heat is made up of two distinct stages, each lasting 9 days on average:

The estrus stage is the window where a female dog will accept males mounting her for coitus, hopefully resulting in pregnancy. Once you start seeing blood drops on the floor and her vulva swelling up, count roughly 7-10 days and that should be the start of the breeding window.

For a precise fertility test, you can ask your vet for progesterone checks as soon as your bitch gets into her heat — first days of proestrus. The veterinarian will schedule several blood tests to check her hormonal changes and inform you when is the best day to organize the mating or artificial insemination.

When is a female dog too old to breed?

Female dogs do not go through menopause like women dog. Instead, their fertility sharply decreases and each litter becomes smaller while holding a higher mortality risk for the newborns. Therefore, it is hard to give a hard age but ethical dog breeders will generally stop breeding their Dam after she reaches 6 years old.

Stop breeding a too old bitch even if she can still get pregnant because her overall energy level and health are not what they used to be. Even if she technically could carry puppies, the bitch’s support system is less able to cope with a difficult pregnancy.

How many times can you breed a female dog?

A female dog, depending on her breed, can have two or three pregnancies every year. The issue here is that so many pregnancies back to back would clearly stress her body and weaken her overall health.

We’ve established a female dog should be bred from her third heat and stop being bred at around six years old. Now, we’ve got to tackle the issue of how often can you breed a bitch? Well, there are two schools of thoughts when wondering how many pregnancies are too many and it all comes down to back to back breeding. We’ve written a full article on back to back breeding and exposed facts, and the results are rather surprising.

When a dog breeder breeds his bitch back to back, he basically gets her pregnant over several consecutive heats, without skipping one. However, he will retire her earlier from her breeding career. The other way of proceeding, more mainstream, is to let the bitch rest for at least a year and a half between each pregnancy.