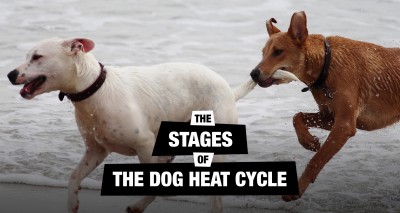 Females reach sexual maturity (puberty) between 8 and 18 months of age, there is tremendous variability in the maturation age between breeds, and even within a breed. From then on, a healthy bitch will come into season every six months on average, some breeds can come into season only once a year or quarterly. The latter bitches are usually not fertile in every season.

When a female comes into heat or season, her body is preparing for mating and the possibility of producing a litter. A successful mating only happens when you have an understanding of your female’s heat cycle and know when is the best time to let the actual copulation happen.

This article has two main sections. The first one goes through the different stages of each bitch heat cycle, while the second section goes through the symptoms and signs to expect when your bitch starts one of her cycles.

UPDATE: we’ve written a comprehensive article about the abnormalities in the dog heat cycle.

A normal heat cycle lasts approximately three weeks, within which the bitch will go through different stages.

The Proestrus Stage — Getting Ready

Lasting around 9 days, this first stage is marked by the eggs in the ovaries beginning to mature and the estrogen levels start rising.

Physically, the female’s vulva lips typically swell up and become pliable, you may also notice some bloody discharges. Her body is pretty much getting ready, day after day, to receive the male’s penis but during the Proestrus stage, the female will not allow mating. At that time, males are attracted to the non-receptive female and she may react aggressively to get rid of them.

For hygienic reasons, and for practical reasons, if you are planning a mating, you may want to trim your bitch’s hair around her vulva and genitals. It will be much easier for her to groom herself, and for the male to mount her if you are organizing coitus during the next stage, the oestrus stage.

If you have male dogs in your close neighborhood or even at home, and you do not want your bitch to mate with them, it is highly recommended to keep the males away from her to avoid the annoyance and little fights between the dogs.

Oestrus is the next stage, also lasting around 9 days, where eggs are released from ovaries and the estrogen levels decline while progesterone levels rise.

Here, male and female are both attracted to each other and the bitch will typically ‘flag’ her tail as if showing the male that she is now allowing access to her vulva. It is only during this Oestrous window that pregnancy will result from copulation or artificial insemination. As per Dr. B. Eilts from Louisiana State University School of Veterinary Medicine: during estrous, females may have clearer bloody discharges than at the proestrus stage.

Proestrus and estrous stages can last anywhere from 5 to 21 days each, the length varies greatly between individuals. Both these stages together form what we commonly refer to as the “heat.”

The Diestrus Stage — Pregnancy (or not)

This third stage is the period following mating, it commonly lasts 58 to 63 days in a pregnant female and 60 to 90 days in a non-pregnant female. Progesterone is dominating and the female will refuse a male’s advances during this stage.

This stage may be delicate for bitches that are not used for breeding as the long exposure to the progesterone hormone may lead to a condition called pyometra, if the bitch is not spayed. Also spelled Pyometrea, this condition can happen at any age, whether the dog has bred or not, and occurs when the uterus fills up with pus, bacteria, and white blood cells. Pyometra is can lead to death if left untreated, usually because of toxins infecting the dog’s bloodstream or the uterus rupturing. Thus, it’s eminently recommended to spay a bitch that is not going to be mated.

The last stage is the quiescence stage for the bitch and it will last until the next cycle starts, generally after four to five months.

After pregnancy, fertility is very low if the bitch has not attained 90 days of anestrus, indeed, a female needs enough time to repair her own uterus or she will not be able to cope with a new pregnancy. Her sex hormones are at their lowest throughout the entire oestrus cycle.

Signs That Your Female Comes Into Season

There are several signs to look out for when your bitch is starting her cycle and the list herein will give you further details. There could be only one sign showing at first so you need to read your bitch attentively to realize it within the very first days.

Don’t forget to take a look at our very informative dog whelping timeline.

First on this list because usually the surest sign of being in season, your bitch will start to have pinkish discharges during the first stage, to then become brighter or tanned.

Easily noticeable, your bitch’s vulva will swell within a few days. You may be unlucky if you are having a female who hardly swells at all but the vulva usually swells up with a spongy look.

As soon as the estrous stage starts, your bitch will be ready for mating and breeding. To send signals to nearby males, the bitch commonly holds her tail up and moves it from side to side to disperse her scent and attract the males near her.

Three miles away is the distance from where a male dog can detect that your bitch is in heat. As soon as her cycle starts, you will notice a lot of males dogs getting closer to your bitch and even hanging around your yard. An over interest expressed by several (random) male dogs is a clear sign of a heat cycle starting.

Similar to the women’s premenstrual syndrome, some bitches can turn to an over-sensitive mood and become a bit contentious with people and other animals around them.

Not very common, some females may have their nipples swollen a little bit. It may be hard to notice for us, though.