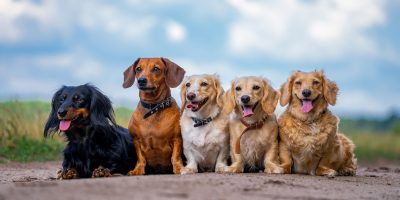 You are sitting on a bench watching your dog play at the park and see several dogs enjoying their time. You spot the hyperactive Golden Retriever and the cute yet feisty Chihuahua. Many can’t help but notice the Basset Hound, too, after it trips to the ground with its long, huge ears.

With all this variety, you start to wonder, how did these breeds come to be? Are all dogs the same species? Dogs differ in their physical, mental, and behavioral attributes due to their breed. Does that mean different breeds are different species? Let’s check it out!

Are All Dogs the Same Species?

It may sound odd but despite their varying appearance, yes, all dogs are considered the same species. All domesticated dogs, no matter the breed, owe their genes to a familiar ancestor, the gray wolf. Through time, some gray wolves evolved as a result of adapting to the environment. With human intervention, many dog breeds emerged. Yet, they still share DNA with the gray wolf.

So, what is species? Species are the basic unit of modern taxonomy. Taxonomy is the classification of living organisms. Species are the labels used to segregate and group organisms according to their characteristics. According to Merriam-Webster, a species is a category of organisms that can interbreed. Plus, their offspring must be viable. So, dogs are all the same species because they can reproduce despite varying or random breeds.

Even with these dynamics in breeding, dogs remain to be the same species. Scientists say it will take thousands of years for dogs to evolve and mutate to create a species of their own.

The Classification of Organisms

Carl Linneaus designed the classification of organisms we now know as taxonomy He was a Swedish botanist, zoologist, and physician. It begins with the most basic unit, the species. Linnaeus designed categories that get broader and encompass more organisms with similar traits.

Sitting at the top of the hierarchy with the broadest classification is Domain. This recent addition wasn’t originally included by Linnaeus. The three Domains are Bacteria, Archaea, and Eukaryota. Archaea comprises single-celled organisms. While Eukaryotes are organisms that are neither Bacteria nor Archaea. Differences in ribosomal RNA are the basis of these categories.

Next to Domain is Kingdom. This used to be in the topmost rank of Linnaeus’ design. Some known Kingdoms are Animalia, Plantae, and Fungi. Then this is followed by Phylum where more specific characteristics are considered. Phylum Chordata, for example, means having a dorsal nerve. Kingdom Animalia has around 31 phyla while Plantae has about 14 phyla.

Under these categories are more specific branches showing similarities of organisms included. As the classification gets further, the traits become more and more specific. Following Phylum are Class, Order, Family, Genus, Species, and sub-species. Notice that the Genus down to sub-species is always italicized. This emphasizes the binomial nomenclature system of classification. It classifies a group of organisms with a two-word scientific name.

Dogs belong to Domain Eukarya, Kingdom Animalia, Phylum Chordata, Class Mammalia, Order Carnivora, Family Canidae, Genus Canis, Species Lupus, sub-species – Familiaris. Dogs share the same phylum with all other vertebrates. The classification narrows down to Order Carnivora, where dogs share the same traits as felines. Then, they separate under family since it gets more specific to Canidae. Canis Lupus is the scientific name of the gray wolf. Since they are the ancestors of dogs, the latter falls on the sub-species Familiaris. Domestic dogs are known scientifically as Canis Lupus Familiaris or Canis Familiaris.

Now you know dogs descended from wolves. But, how did this wild and aggressive animal become the man’s best friend? Prehistoric humans were nomads. Hunting from different places was the main source of food. Yet, through time, man learned to take shelter in one place and build a community. These settlements created garbage dumps that lured the canines. So the wolves became the first waste management system of the early communities. They also served as security alarms as they would bark when they sense threats. Because of these functions, they were tolerated by humans.

Eventually, the wolves that were less fearful and barked a lot thrived in human communities. These traits became their keys to survival as they adapted to this new way of living. Those who had these characteristics had more offspring. And later on, became an isolated group from their wild counterparts. This is the process of natural selection.

For example, the Dachshund, a short-legged dog with a long body, was intentionally bred to hunt burrowing animals. Their genetic makeup was changed to produce dogs with shorter legs yet still have the same body size. Another similar breed with this trait is the Basset Hound. People are now also breeding dogs of different sizes.

At present, there are more than 300 dog breeds around the world. There are organizations such as the American Kennel Club, that uphold the standards of dog breeds. Dogs indeed have advanced from living merely from food scraps to living regal lives among their masters.

With more recent research on dogs’ traits comes the emergence of new breeds. Humans continue to design dog breeds to suit a specific standard. From 2016 to the present, the American Kennel Club has registered 10 more dog breeds. The Biewer Terrier is the latest one, registered in 2021.

Whether it is due to natural or artificial selection, dogs continue to adapt and change. Thus, current dog breeds may also change depending on the environment, interbreeding, and lifestyle. These factors may affect the genetic traits of dogs. So dog breeds may come and go, some go extinct but manage to pass on some traits to current dog breeds. Some may thrive temporarily while others would stay. Is different dog breeds different species? The answer is no. Despite different genetic changes, dogs remain the same species.

Are All Dogs the Same Species: FAQs

Let’s check out the answers to frequently asked questions about dog species:

Are dog breeds the same as species?

Dogs vary in size, color, fur, and temperament because of their breed. Yet, despite these differences, dogs belong to the same species and share the same genes. This also means dogs can mate even if they belong to different breeds.

Are all dog breeds man-made?

Most of the modern breeds are man-made. Thousands of years ago, wolves evolutionary developed into dogs due to natural selection. Their behavior changed to adapt to their way of living. Then, humans interbred the dogs to get rid of bad traits and tailored fit to suit certain jobs. This started the different dog breeds.

Are wolves and dogs the same species?

Yes, wolves and dogs are the same species. They share the same DNA and an evolutionary past. But, because of domestication, dogs developed other traits different from wolves. This created a subgroup under the species of the gray wolf.

Can dogs and wolves mate?

Yes, dogs and wolves can mate because they belong to the same species. They produce a hybrid with mixed physical traits and behavior. Their offspring are also interfertile, which means they can mate and reproduce.

Is a dog a species or subspecies?

Dogs are a subspecies of Canis lupus or the gray wolf. They share similar genes, yet dogs differ in some characteristics. These differences separated the dogs from wolves. And created the subgroup under the same species to separate dogs from wolves.

How many species of dog are there?

Despite the many dog breeds, all domesticated dogs are the same species. So, are all dog members of the same species? Yes, all domestic dogs are scientifically known as Canis lupus familiaris. However, in the Canidae family, there are 35 other species related to dogs but can’t mate with dogs. These include coyotes, foxes, dingoes, jackals, and other extinct species like the dire wolf.

What breed was the first dog?

Dogs have succeeded in moving from the side roles to the spotlight of man’s life. New dog breeds continue to arise from man’s intervention. Time has been the witness to the deep relationship between dog and man. And only time will tell if this will possibly flourish into a different species in the future.