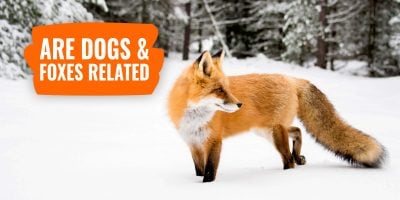 If your dog is lucky enough to look like the elegant fox, you may be wondering, “are dogs and foxes related?” While dogs and foxes may look alike in some ways, they are actually quite different from each other.

Dogs and foxes diverged from each other millions of years ago, leaving them unable to breed and unable to get along. Not only do they live differently, but they eat, breed, and learn differently too. So, are dogs related to foxes? And how closely are they, if so? Read on to find out more.

Are Foxes and Dogs Related?

This puts the remaining foxes in the Vulpini tribe, the sister-tribe of Canini. Within the Vulpini tribe are the bat-eared fox, fennec fox, Blanford’s fox, Tibetan sand fox, kit fox, and Arctic fox. These foxes are less related to dogs than the foxes in the Cerdocyonina subtribe. Only two foxes remain; the Island fox and the gray fox, members of the Urocyon genus. These foxes are the least related to domestic dogs.

How Are Dogs Different From Foxes?

If dogs and foxes are not related, what makes them different from one another? Some of the biggest differences include a shorter lifespan, more secretive behavior, inability to litter train, and a vastly different diet. Due to these vast differences, foxes cannot be pets in the same way that your pooch can.

Unlike dogs, foxes’ lifespans vary considerably. For example, a wild red fox can expect to live for 2 to 5 years. Similarly, Arctic foxes live for 3 to 4 years in the wild. However, other fox species live much longer, with lifespans that are more similar to domestic dogs. Fennec foxes may live for 10 years in the wild and 13 in captivity. Tibetan sand foxes live for 8 to 10 years in the wild. In comparison, the average domestic dog has a lifespan of 10 to 13 years! So, while some foxes have a similar lifespan to your furry friend, others have considerably shorter ones. It all depends on the specific fox species.

Most wild foxes are shy and secretive around humans. They will avoid humans and larger animals at all costs, as they see humans as a threat. However, some urban foxes are becoming bolder as they become closer to people. This bold behavior is unusual and should be discouraged. In exceptionally rare cases, urban foxes bite outdoor cats and small dogs or puppies when outside at night. In contrast, most domestic dogs are outgoing and love the company of people.

Unlike dogs, foxes cannot be completely housetrained. This is because foxes instinctively mark their possessions with urine. However, some fox species are easier to house train than others. For example, red foxes are easier to housetrain than fennec foxes. Also, foxes do not respond to punishment the same way that dogs do. Although dogs should not be punished either, a fox will never understand that the punishment is due to their actions. Any punishment or other negative consequence only causes fear in domestic foxes as they do not understand training the same way that dogs do.

Unlike domestic dogs, foxes need a diet that mimics their prey from the wild. A captive fox must be fed pre-killed mice or rats, eggs, and insects. While fox food with added taurine is available to buy, kibble alone is not enough to mentally stimulate a pet fox. Also, in the wild, a fox will cache their food by burying it for later consumption. Some foxes also have specialized diets, like the crab-eating fox for example, which feeds opportunistically on turtle eggs and lizards as well as crabs. In contrast, your dog can gain all the nutrients they need from a quality bowl of kibble with a good source of protein.

There are several dog breeds that resemble foxes. While no breed looks completely akin to a fox, some have characteristics that could be described as fox-like. Members of the Spitz family are among the most fox-like breeds. Spitzes are adjusted to living in harsh northern climates. With their insulating double coats and small, top-set ears to reduce the risk of frostbite, Spitz breeds may resemble foxes. As well as this, Spitz breeds are known for their independence and suspiciousness towards strangers, mirroring a wild fox’s secretive nature.

For example, the American Eskimo dog could resemble the arctic fox. With its plush white coat and vocal nature, this breed makes a beautiful and active companion. Similarly, the curious and agile Schipperke resembles a black fox. With its high-set ears and small size, this breed makes for a rewarding fox alternative. The Finnish Spitz has a square build, red coat, and high-set ears that give it a red fox-like look. Puppies of this breed are often described as similar to a red fox cub. With this being said, you should not get a dog based on appearance alone. Your dog must suit your lifestyle and home before anything else!

Can You Keep a Fox As Your Pet?

Some people buy foxes with the hopes that they can keep them as they would keep a dog. Unfortunately, this leads to abandonment and euthanasia of these animals. Foxes are very high-maintenance and require a lot of space to dig, run, play and forage, making their ownership a specialist hobby requiring specialist skills. A responsible fox owner must have specific interests in exotic animal management and behavior and should understand that fox behavior is separate from dog behavior.

For example, a pet fox cannot be litter trained in the same way that a dog can, as they need to mark their territories and possessions. Although foxes are rarely aggressive towards humans, they may bite when distressed or panicked. They can also be highly destructive around the home, chewing and ripping objects and furniture without discrimination. Foxes cannot be trained in the same way that a dog can, especially as they do not understand punishments. While you should not punish your dog in the first place, a pet fox is even less likely to understand that their actions around the home have consequences. All of these factors combined pet foxes unsuitable for the average family home.

Are Dogs and Foxes Related? – FAQs

So, are dogs and foxes related? If you have any more questions about this topic, feel free to refer to our Frequently Asked Questions section for more details!

Are foxes more closely related to cats or dogs?

Foxes are more closely related to dogs than cats. In fact, foxes are only very distantly related to cats. Both foxes and cats are members of Carnivora, which splits on into two groups: the Caniformia, or dog-like carnivores, and the Feliformia, or cat-like carnivores. This split happened about 52 million years ago, putting a significant distance between the fox and the cat.

From this split came the Canidae family, which encompasses dogs, foxes, jackals, and wolves among others. There are three more splits from here: Canini, Vulpini, and Urocyon. While dogs split off to Canini tribe, most foxes go off to Vulpini tribe. This divergence between dogs and foxes happened roughly 7 to 10 million years ago. The remaining two foxes belong to the Urocyon genus.

Can a fox breed with a dog?

Dogs and foxes cannot interbreed. This is because dogs and foxes diverged 7 to 10 million years ago. In contrast, dogs are more closely related to wolves, coyotes, and dingos. These species only diverged 3 to 4 million years ago, compared to the 7 to 10 million year difference between the dog and the fox. Along with this divergence came several changes that stop foxes from breeding with dogs. The most important difference is in their chromosomes.

Do foxes and dogs get along well?

Most dogs and foxes do not get along well and should not be kept together. Dogs and foxes are both territorial animals, and foxes instinctively need to mark their territories and possessions. Also, the two learn very differently. While your dog may understand your requests, a pet fox may not. A pet fox will not pee exclusively in a litter box or outside, but your dog is expected to pee outside every time. This can cause confusion and conflict between the two if kept in the same home.

Finally, although exceptionally rare, wild foxes are known to bite or attack small dogs when left unsupervised. This is a risk to consider when leaving small dogs outside alone. Furthermore, many dog breeds with a high prey drive will instinctively chase or harm foxes. This puts both animals at great risk of harm.

Have dogs evolved from foxes or vice versa?

Dogs did not evolve from foxes, nor did foxes evolve from dogs. According to research, wolf-like canines and fox-like canines may have diverged from an ancestor at around the same time, between 7 and 10 million years ago. The small fox-like canid, Leptocyon, became the common ancestor of animals in the Caninae family, the family of dogs, wolves, and foxes. Leptocyon was a genus that encompassed 11 known species. Towards the end of Leptocyon’s existence, some of its species closely resembled today’s foxes. The immediate descendent of the Leptocyon genus, Eucyon, formed populations that eventually became the first members of the Canis genus. Eucyon was a transitional taxon of coyote-like or jackal-like canines with at least two species. This transitional taxon is differentiated from Leptocyon by its difference in size and bone structure.

Do foxes mess with dogs?

Foxes can be dangerous to pets, including dogs. However, most dogs are not in danger from foxes unless they are very small or very young. This risk increases if your dog is outside for long periods. Fortunately, dogs are more likely to chase wild foxes away than they are to be attacked by them.

The greatest risk to your dog from a fox is disease transmission. Wild foxes harbor a range of parasites, including ticks, fleas, flukes, worms, and mites. Possibly the most devastating problem with wild foxes is rabies, a disease for which foxes are a major carrier in some countries. This virus is transferrable through bites and can be fatal to humans and dogs alike. To protect your dog, make sure that you keep their vaccines up to date!

Are dogs and foxes related? Although these two animals were once close taxonomically, evolution has put millions of years between them since then. They can no longer interbreed and struggle to co-exist without conflict.