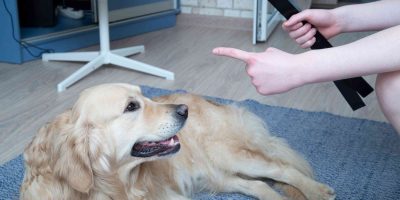 Facebook pages dedicated to dog training are filled with raging debates on which is the best method of training dogs. Should dogs be trained using positive reinforcement? Or should they be trained using correction and tools such as prong collars, electronic shock collars and others like it?

Crack open any dog training book from over fifteen years ago and you will see a huge difference in how dogs used to be trained as opposed to how most are trained nowadays. I’ve been collecting dog training books since I was a child and some of the books have so many outdated methods it’s scary that a lot of these books are still available to buy.

A lot of these books go with the theory that dogs work in a pack structure of there being an alpha male and those lower than him must respect the alpha and follow his lead. This has also come to be known as the dominance theory.

Dominance theory dictates that you should be the alpha male in the relationship with your dog and do certain things to show him «who is the boss.» This includes alpha rolling which tells you to flip your dog onto his back and make him submit. From personal experience and situations, I have heard of, this technique is not a good idea. It has caused some dogs to become automatically wary of new people. It has also led to some dogs being aggressive to the person who has been performing the alpha roll.

This method, along with other dominance related are unsuitable.

It’s thought that dogs descended from wolves. However, dogs have evolved over centuries from wolves. With that, their social structures have also changed. Dogs don’t have to be dominated. They also know that humans are not dogs. Yes, you can be a good leader to your dog without dominating him, alpha rolling him or putting a hand on him.

Other influences on correction training are those of Barbara Woodhouse who used to be on TV with her training methods, and Cesar Milan is another more recent correction trainer. The term ‘tsst’ has never been more annoying.

Correction training is no way to train a dog. Your dog will ultimately become scared of you and not respond to actual training properly. You will be sending the wrong message to your dog which will eventually not provide you with the desired results.

Prong collars, electronic shock collars, and other adverse training equipment have been removed from several selling websites and there are petitions for them to be banned. Dogs have been injured and scarred by people who used these products to train their dogs rather than actually putting work into their dogs.

There are now better ways to train your dog without having to punish or dominate him. By using a reward system and luring your dog to do what you want, you can teach your dog an array of tricks or behaviors that you desire. Clicker training has become more popular as a positive reinforcement method.

Positive reinforcement uses a reward-based system that uses a dog’s favorite toys or treats. Using the toy or food of your choice, you lure the dog into the behavior you want and when he gives the desired behavior, you reward him with it.

Positive reinforcement is now being endorsed in canine charities around the world and it is taking over correction training. Rather than forcing and coercing your dog to do what you’re demanding, you are working with your dog. It’s a partnership. It’s incredibly bonding for both of you.

A lot more organisations are endorsing positive reinforcement training including the Association of Professional Dog Trainers and the Institute of Modern Dog Trainers.

Their courses and memberships are based around positive reinforcement training and working with a dog rather than hurting him. They also hold lists of dog trainers who use these methods so dog owners are confident in the fact that their trainer will not harm their dog, either mentally or physically.

It’s important when training your dog that you get advice from a dog trainer so you ensure that you are doing the right thing. It is so easy to encourage the wrong behaviors when you are an inexperienced trainer. Taking your dog along to a training class is also ideal to socialize him as well as learn great tips about training your dog from a professional.

If you do decide to train your dog on your own, it’s crucial that you do not overdo it. When training my own dogs, I only stick to five-minute sessions which end with a game. That way my dogs associate training with something fun and stimulating!

At the end of the day, you always want what is best for your dog. By training your dog, you are ensuring that he will behave himself and will be well-behaved when you are out with him. Training also means you get to spend time with your dog and increase the bond with him. There is no greater feeling when your dog does something you’ve taken time and effort to train him to do.

You also don’t have to hurt your dog to train him. You can do it positively. It is a lot more rewarding and fulfilling on a personal level.