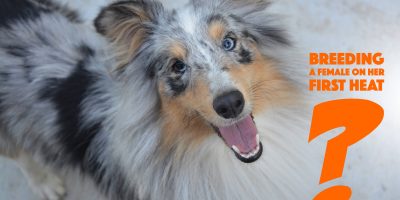 Female dogs are the cornerstones of every successful breeder’s bloodline. However, too many breeders just pick the wrong time to breed their females. Often, they will attempt a mating as early as the female dog’s first heat ever, or perhaps the second. And they shouldn’t.

There are plenty of debates surrounding the breeding of a female dog (back to back breeding, when is it too late, and more) but everybody agrees on one thing. A female dog should never be bred on her first few heats. Breeders, vets, kennel clubs, they are all agreeing (for once!) so now it’s a matter of spreading the information.

Such recommendations refer not only to the physiological maturity of the dog’s body but also to the mental state of the female dog. For decades, breeders have made attempts at breeding their dogs as early as possible; the females who have become mothers too early often shown unpredictable behavior during and after the maternity.

If they become mothers so early, they can act confused and be uncertain how to behave in this new situation, which carries a risk of not being careful enough with the newborn puppies, leading even to a danger to the lives of the puppies.

Some of the breeders, for many different reasons, are too impatient to start reproducing their young females. They want to see the results of each mating as soon as possible, which makes them use young and still immature dogs in the breeding. However, the leading kennel clubs have clear breeding rules that advise breeders not to breed very young dogs. The lower limit for males is 18 months old, and 14 months old for female dogs.

Kennel clubs obviously can not control the number of heats a certain female had and therefore they set an age limit of the dogs that should be used. They also suggest breeders not to breed dogs without proper medical examinations. This helps prove that the parents are not carriers of severe hereditary diseases that are too common in certain breeds. Here we mainly speak about hips and elbows dysplasia, congenital anomalies of the heart and large blood vessels.

We must remember that the embryos use a big part of the calories of the mother organism. Therefore, in case the mother has not completed her very own growth and development yet, a litter will burden her and she may even neglect her whelps.

Dogs, just like their wild relatives –the wolves and the foxes– belong to the group of monoestrous animals. Meaning, they have only one breeding season a year. Dogs, in most cases and depending on the size of the breed actually have between two and four reproductive cycles during a period of 2 years. But they are still classified as monoestrous animals.

The rest of the animal species can be polyestrous if they have more reproductive cycles during the year, or seasonal types of animals whose estrous cycles only appear in a certain season of the year, usually in the spring or summer.

How early do heats appear in female dogs?

The female dogs most commonly are sexually maturing at 8 months to 1 year of age, and this is manifested by the onset of the first reproductive cycle. What this means is, a female is from this first heat onwards able to procreate.

The bitch, at this age, is far from ready for raising a litter, but she is able to have it. The health risks of a pregnancy on a first heat are definitely great, both for the mother and for the entire litter. We must bear in mind that the pregnancy, as well as the breastfeeding, cause significant stress to the whole body of the female, so she must be completely formed, strong and mature to bear the pregnancy and raise the progeny. The reproductive system of the female is ready, her body not quite there yet on the first heat.

Breeding females on every heat is a hot debate (see our article on back to back breeding.) It seems like it’s healthier for the reproductive system, but not for the rest of the body. Therefore, the breeders of your females should think of making a break of at least one heat without mating, so the body of the female has enough time to completely recover from the previous pregnancy.

What to do if accidental mating happens?

We must mention the possibility of an unplanned, accidental mating, after which the breeder has two choices.

The first one is to notify the kennel club about the undesired mating and ask for an expert opinion and permission to raise a litter. The second option is to make an appointment at a vet clinic and ask for a planned abortion of the fetuses.

If the abortion is performed by using estrogen hormone medications, it is highly recommended to breed the female in the next heat in order to regulate the hormonal balance in the body and prevent the risk of inflammation of the uterus called pyometra.

In order to prevent the future occurrence of unplanned mating, breeders who own a large number of dogs, including males and females, are recommended always to keep the females in heat separated from the rest of the dogs in the kennel. This way, we prevent the unwanted mating of young immature bitches, and at same time we prevent the possible accidental mating of close relatives (ie. inbreeding.)

What is the upper age limit when breeding a female dog?

An unwritten rule says that old female dogs should not be used in breeding. And the upper limit is considered 8 years of age for breeding females or when the size of the litter sharply decreases. By the way, dogs do not go through menopause.

Because of the diversity of dogs (think about how many breeds there are), we must note that all dogs do not mature fully at a same age. The smaller breeds usually mature earlier than larger ones and they are sooner capable of raising their offspring. But these small breeds also have smaller litters.

Bear in mind that only healthy and fully formed females are able to raise strong and healthy litters. The successful cooperation between the responsible dog breeders, the competent kennel clubs and the trusted veterinarians is the key point of successful breeding, the producing of high quality dogs and the improvement of the breeds, which is the definitive goal of every passionate breeder!