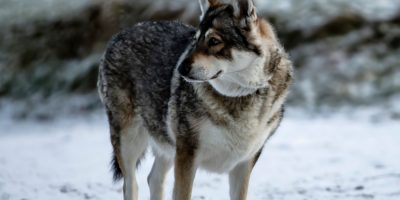 The Northern Inuit Dog is one of the most wolf-like dog breeds available today. Despite its unsteady beginnings, the Northern Inuit Dog now stands as its own breed, as well as contributing to the development of the Utonagan, Tamaskan Dog, and the British Timber Dog. None of these breeds are currently recognized by the AKC, KC, UKC, or FCI, but the communities surrounding these breeds strive to keep them authentic and healthy by themselves.

An authentic Northern Inuit Dog is health tested for hip dysplasia and eye problems before breeding. This is important to note because backyard breeders may falsely pass off German Shepherd, Siberian Husky, and Alaskan Malamute crosses as Northern Inuit Dogs or their offshoot breeds. But what else makes the Northern Inuit and its offshoots unique? Read on with us to find out more.

The Northern Inuit Dog originates from the UK. The breed’s founder was Edwina “Eddie” Harrison. In the 1980s, she sought to create a dog breed that closely resembled the wolf, whilst keeping the dog’s trainability and affectionate nature. So, she began crossing dogs that she had imported from overseas. However, her project did not last for long. The RSPCA soon became involved after allegations of neglect came about. This led to the confiscation and rehoming of all of her dogs. Because of this, there are no records that clearly describe what dog breeds were used to create the founding Northern Inuit Dogs. What we do know, however, is that it is likely that German Shepherds, Alaskan Malamutes, and Siberian Huskies were probably involved. Samoyeds and Greenland Dogs may have also played a role in the Northern Inuit Dog’s development.

Male Northern Unit Dogs are usually larger than females, standing at 25 to 30 inches tall. Females of the breed stand at 23 to 28 inches tall, in comparison. Similarly, while males weigh 70 to 110lbs, females weigh much less at 55 to 84 lbs. The Northern Inuit Society stresses that the dog’s overall balance is more important than its size.

The Northern Inuit is a distinctly “wolfish-looking” breed. With standing ears, a dense coat, a bushy tail, and slanted eyes, this breed could be mistaken for a Eurasian wolf at a glance. The mouth has tightly-fitting lips with no open corners or flews, which would otherwise give the breed a doggish look. The sexual dimorphism is also strong in this breed, much akin to a Eurasian wolf. Males must appear larger, and females smaller. However, even with these unique traits, the breed is still not a perfect replica of the grey wolf. Wolves carry their heads lower, cannot have blue or dark brown eyes, and cannot have pink noses or paws.

The Northern Inuit Society describes the breed as friendly, placid, and outgoing. More details on the breed’s temperament are given by The Northern Inuit Association, which adds that the breed is aloof with strangers. However, it is not aggressive. They further add that the breed bonds for life with specific people and is extremely loyal. It also gets along well with other dogs and animals.

The Northern Inuit Dog was the predecessor to three other dog breeds. These are the Utonagan, the Tamaskan Dog, and the British Timber Dog.

Utonagans were the first offshoot of the Northern Inuit Dog. Northern Inuit Dog breeders began to disagree about the direction that their breed should take. Some breeders sought to introduce stricter health testing as well as outcrossing to combat the hip problems that were developing in the breed circle. However, not all breeders were in agreement. So, there was a split within the breed. With more outcrossing efforts, some Northern Inuit puppies began to resemble wolves less and less. So, there was a split in the Northern Inuit breed, leading to the birth of the first F1 Utonagan litter in 2002. With this litter came the introduction of mandatory hip scoring for all breeding stock.

Like the Northern Inuit Dog, the Utonagan has a rocky past itself. Unfortunately, one such case came when the owner of Hillbank Kennels was found guilty of animal cruelty to 19 Utonagan dogs in 2008. At the time, she had also set up the Utonagan Rescue, which is now defunct.

There is little information or traction surrounding this breed today. As it stands, many breed clubs that once dedicated themselves solely to the Utonagan have moved on to support the Tamaskan Dog or their own wolf-like breed, instead. The British Utonagan Society is now the Caledonian Wolfalike Association, for example, which considers its “Caledonian Wolfalikes” or “British Utonagans” to be distinct from the original Utonagan.

During the Utonagan’s development, the breed’s founder sought to find other wolf-like breeds. Her search brought her to Polar Speed Kennels in Lapland. This kennel crossed several breeds, including American Wolfdogs, Siberian Huskies, and Czechoslovakian Vlacks. The goal was to produce the best sled-racing dogs in the world, a goal that many of their dogs lived up to. These wolf-like dogs impressed the Utonagan’s founder, who reserved six. Bringing these dogs into the Utonagan’s gene pool would, in theory, enhance the breed’s working ability and wolf-like appearance. The Utonagan Society, however, did not approve of this. As such, the breeder went on to create her own breeding program, and the Tamaskan Dog was born. Northern Inuit Dogs, Polar Speed dogs, and Utonagans crossed to produce this new breed. With the Utonagan moving in a new direction, many breeders abandoned the Utonagan project in favor of the Tamaskan Dog.

The British Timber Dog is the newest offshoot of the Northern Inuit Dog. The first three puppies of this breed were born in 2012, when a Northern Inuit was crossed to a Utonagan from old lines. Most British Timber Dogs trace back to these three dogs, but the Timber Dog Club UK, which was founded in 2016, is in the process of adding new lines. The Timber Dog Club UK once operated through a website, but now operates through Facebook and Instagram. With a great emphasis on health testing for the breed, it was recently discovered that many British Timber Dogs and their predecessors may be (albeit by a very small amount) low-content wolf hybrids. This is important to note because many insurance companies will not insure wolf hybrids, no matter how low the wolf content is.

Have any more questions about the Northern Inuit Dog? Feel free to refer to our Frequently Asked Questions for more information! If in doubt about this breed or its offshoots, consider contacting their breed clubs with your queries.

While Northern Inuit Dogs may resemble grey wolves, they are not inherently dangerous by any means. The breed standard for the Northern Inuit Dog states that the breed must be placid, friendly, and outgoing – aggression is unusual, and not accepted, in the breed. However, the breed is known for having high energy levels. Without an outlet for this energy, a dog of any breed can become stressed and bored, leading to destructive behaviors, among other behavioral issues. Northern Inuits are also known to be aloof with strangers, so early socialization is key for bringing the best out in your Northern Inuit Dog.

Are they good with children?

Northern Inuit Dogs and their offshoots are held in great regard for their love for children. These dogs also get along well with other dogs and animals. In general, Northern Inuits are excellent family dogs, being loyal, friendly, and playful.

What are the associations affiliated with the Northern Inuit Dog?

There are several associations working with, or associated with, the Northern Inuit Dog. The two most prominent groups are the Northern Inuit Society and the Northern Inuit Association. The Tamaskan Dog’s leading breed clubs are the Tamaskan Dog Society of Great Britain and the Tamaskan Register. British Timber Dogs belong to the Timber Dog Club UK. And, lastly, the Utonagan does not appear to have a specific breed club dedicated to it at this time. All existing breed clubs for the Utonagan have moved onto other wolf-like breeds. For example, the British Utonagan Society has since become the Caledonian Wolfalike Association, which aims to breed “Caledonian Wolfalikes” or “British Utonagans” rather than the original Utonagan dogs. The association considers its dogs to be distinct from the original Utonagan.

Northern Inuit Dogs are not hypoallergenic. This breed sports a thick double coat, so shedding is likely to happen all through the year. With that being said, however, no dog breed is truly hypoallergenic. While it is true that some breeds shed less than others, there is not a dog breed that does not shed at all.

How much do Northern Inuit Puppies cost?

The price of an authentic Northern Inuit Puppy can be upwards of $1,000. However, owners of this breed state that the price was once much lower, often below $600.

Be wary of breeders who claim to sell Northern Inuit Dogs through social media – many backyard breeders of Husky crosses will falsely claim that their dogs are Northern Inuit. This is important to note, because authentic Northern Inuits are health tested for hip dysplasia and eye problems, as per the breed club’s rules. Dogs that do not belong to the club may not have any health testing done.

The Northern Inuit Dog has a complicated but rewarding history that makes it one of the most intriguing breeds today. Not only does it have some wolf-like traits, but it also directly contributed to the development of the Utonagan, Tamaskan Dog, and the British Timber Dog, too.