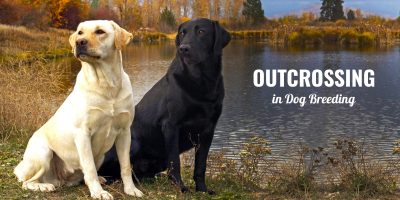 Outcrossing is the breeding of two unrelated dogs within the same breed. Dog breeders outcross their bloodline’s dogs in order to bring valued characteristics from another breeder’s bloodline. Outcrossing dogs also increases the over bloodline’s gene pool and genetic diversity.

Definition of Outcrossing in Dog breeding

In dog breeding, outcrossing is the mating of two unrelated dogs within the same breed.

Outcrossing should not be mistaken with cross-breeding which is the mating of two different breeds. Rather, in order to outcross, the dogs have to be of the same breed albeit from different bloodlines. The prime objective is to breed two dogs that are completely unrelated genetically. Therefore, the two mating dogs must come from separate bloodlines. These bloodlines have to have at least a four generational pedigree gap of no common ancestors. This is due to the fact that genes are substantially concentrated during the first four generations.

Outcrossing in dog breeding provides ample opportunities to regulate diversity within the genetics of your breed. Due to other encouraging benefits, an outcross can definitely improve your linebreeding practice in a general sense, but it is most advisable to do this when specific intentions are established. It is actually considered a norm within breed standards, as opposed to what the general population erroneously believes. In fact, animals who live in the wild are prime examples of how the norm of outcrossing is practiced.

With the introduction of new blood in a line, recessive traits are able to cross over the entirety of the population. In doing so, genetic variation is greatly increased and thus, protecting the line from extinction. In general, offspring that result from an out-cross tend to exhibit more hybrid vigor (heterosis). Often times, outcrossing in canine breeding is considered a “wildcard” approach to breeding due to the simple fact that breeders do not know for sure how the two separate lines are going to interact with each other.

Differences between Line-breeding, Back-breeding, and Cross-breeding

Although all these breeding methods can easily be mistaken for one another, and many dog owners make the mistake of doing so, they are in essence exceedingly different from one another. None of these should be confused for outcrossing.

For instance, line-breeding is actually a form of close inbreeding. However, while inbreeding deals more with pairs that are closer related within first generational relatives, line-breeding integrates relatives farther apart. In line-breeding, the objective is to bring one of the pedigree members back to the forefront to increase the likelihood of his genetic influence on the future offspring.

Back-breeding is the practice of repeating the same breeding of offspring with an ancestor. For example, if a breeder has a superior male or female with an enhanced trait, they will mate, and using one of the offspring of the litter, will be mated again with them. This tends to be a continuous process until the desired results are established, or some faults begin to appear in the line. Backbreeding is largely responsible for many superior qualities that have been noted in many breeds as it helps to ensure quality. This form of “breeding back” sets a standard type within the breed and the offspring produced will essentially “mirror” the greatness of that particular line.

Cross-breeding, although has nothing to do with the specifications of an outcross, still shares similarities and that is precisely why both breeding types are commonly mistaken for the other. When cross-breeding, however, the mating of two unrelated dogs is heavily promoted, but instead of targeting the same breed, cross-breeding involves the cross of dogs from different breeds. Cross-breeding results in hybrid dogs (e.g. Labradoodle, Maltipoo, Pomsky, or more generally, mutts) with its own particular nomenclature.

It is always recommended to dog breeders not to stick with a single method of breeding. Instead, dog breeders should utilize closer breeding to eventually fix traits and crosses to avoid a loss of vigor. All methods can work as an advantage depending on the timing and goal of the breeder. There is no magic formula so the breeder must learn how to switch up when the timing is right. Inbreeding, though, is notoriously dangerous and must therefore only be used with a lot of confidence and knowledge.

Outcrossing is very common amongst dog breeders — it is what most of them do, mostly because it is the easiest and more natural strategy to adopt. Unlike other breeding techniques, outcrossing gives you a whole lot of options: any dog that has the same breed as yours but is not closely related to yours. So, having so much choice brings stud service fees down, which in turn helps to make a small profit.

Bring characteristics your dogs are missing

Canine outcrossing has its advantages and these explain its rise among the dog breeding community. One of the most prominent reasons for an outcross is to introduce new characteristics or traits into your bloodline that your dog is missing. Due to a lack of new blood in a line, the gene pool is severely limited. These closed gene pools can later prove to be a threat as many undesirable traits, including diseased characteristics, are continued down the line. Down the road, this situation becomes almost impossible to free from or difficult to eradicate the common error.

When an outcross is practiced right, the gene pool of that bloodline becomes open. This, in turn, increases the chances of the survival and health of the line. The outcross allows in new blood to be explored and the previous errors are fixed by the introduction of new characteristics that were absent in the line previously. For example, a bitch can be lacking a specific trait in a specified conformation that is usually quite common in her own line. The objective would be to find her a stud in which the missing trait is strong and more concentrated within his line. This new characteristic being introduced is, thus, further built on to make it an exceptional trait. With proper inbreeding or linebreeding, the traits are then further enhanced.

Remove undesired traits from your bloodline

Likewise, just as it is a great advantage to introduce a new characteristic for the extra boost in diversifying your bloodline, removal of traits is also on the top of the categorical list of advantages. Many breeders are sold on the idea of introducing a new blood in their line for the sole purpose of removing an undesirable trait that has shown precedence in the current line of breeding. Selective breeding has given breeders more control of the overall outcome of their breeding business by allowing new blood to enter their line.

Usually, when a negative trait shows up in their own line, breeders will take all measures necessary to eradicate the characteristic and increase the line’s overall fitness. The new blood being introduced greatly enhances the survival of the positive traits and leading to an overall improvement of the dog’s genetics. Of course, this needs to be done right with the right timing and choosing the mate is of utmost importance in order to establish success.

Normally, when a bitch is producing small litters consistently, it is a sign of an inbreeding depression within her line. When this happens, the animal should not be further bred. This is when outcrossing in that particular bloodline can prove to have favorable results as an outcome. The introduction of external blood will significantly thwart this error in breeding and litters will eventually grow in size and the depression can finally be dealt with, while increasing many favorable conditions in which the survival of the line is encouraged.

Outcrossing is an invaluable breeding strategy to meet certain needs. Although it provides “means to an end”, it is not recommended for continual use. In fact, linebreeding is the recommended way to fix desired traits in a bloodline. However, linebreeding may also inevitably fix other smaller traits that are perhaps more imperceptible yet unwanted. The practice of out-crossing can undoubtedly help in clearing some of these flaws. Though, by outcrossing continuously, breeders will inadvertently end up dissolving all the good traits over time. This will just leave the breeder back to square one (i.e. owning vanilla dogs).

Furthermore, too much outcrossing poses some dangers to the line as well. Contrary to popular belief, continuous outcrossing will not continue producing the same favorable results as the first outcross. If the dogs are not bred back into their line, the resulting offspring of the outcross can prove to be disappointing considering they hold an assorted range of genes for all the characteristics in which both of the parents differed greatly. Ultimately, this means they also contain within their line a considerable number of puppies that also possess less than perfect attributes or breeding quality. Outcrossing when done over time, makes each future breeding quite a random draw.

Breeders are advised to weigh each breeding decision carefully. Introduce new blood only when precautionary means have been considered and planned out. As great are the advantages of outcrossing in dogs, this practice is just as likely to reduce positive traits that are fixed as well.