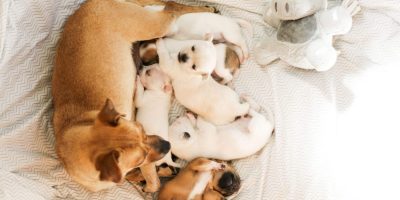 The size of a puppy litter can be influenced by so many different factors, including random circumstances. Therefore, it is almost impossible to predict. Despite what you might have read, you will never know exactly how many puppies a pregnant female will be carrying until she is examined by a vet.

This article is part of our bestseller, The Dog Breeder’s Handbook, a must-have for anybody planning or having a breeding (one-off or first of a long series.) Use FLASH33 at checkout to get 33% OFF our big bundle today.

There is no such thing as a normal puppy litter size. Usually, the size of a dog litter is mainly based on the dog’s body size — simply because biologically, bigger bodies are able to carry a larger litter size than smaller bodies. The litter size also depends on the breed of the female. Some small dog breeds will only bear one puppy at a time; we call these singletons.

Here are a few breeds and their average litter size:

Mother nature generally has her reasons and therefore made it so dogs rarely produce more than they can handle. Overly large litters may become a problem of their own. Having a larger litter may cause delivery problems with exhaustion and stillborns. It is harder for a female to feed the entire litter, and for herself to stay hydrated, and for her to eat enough to be able to nurse them properly.

Now, breeders often want to know how to influence their puppy count to lean towards the higher number in the predicted range. Let’s say for your breed the average litter size is between 8 and 12 puppies, some breeders want to help their dam get to 11, 12 or even 13 puppies.

Let’s see if and how this is possible.

Now, even if it is extremely hard (if not impossible) to determine and actively decide on the size of your next puppy litter, several factors can influence with more or less weight a dog litter size.

Let’s review these factors below.

One of the most forgotten factors affecting the size of a puppy litter is the influence of a high coefficient of inbreeding.

The Institute of Canine Biology published a chart illustrating the comparison of data taken from the litter size of six particular breeds of dogs from the records of the Swedish Kennel Club: English Springer Spaniel, Golden Retriever, Labrador Retriever, German Shepherd, Finnish Hound, and the Swedish Elkhound.

Although the results are relative, it clearly shows that the more inbred the puppies are, the smaller the puppy count will be. Usually, when a dog breeder uses a close inbreeding or linebreeding, it is to fix some desired traits but the price to pay is a much smaller litter.

For example, Spaniels and retrievers usually have anywhere from four to eight puppies at a time while on the other hand, while smaller dogs such as a Terriers can only have two maybe three in a litter.

Age of the Bitch

The female’s age is a major point in determining the size of a puppy litter, and this is factual. Usually, dogs under the age of seven will have smaller litters than those that are of old age – but they should never be bred too early or too old. The very first litter, no matter the age, will usually be smaller than the others to come.

If a female is not bred until after the age of 5, she may have smaller litters permanently in terms of puppy count. If she was bred earlier than 5 years then she will probably have a slightly larger litter size. Dogs who are between 2 and 5 years usually make the largest litters.

The first heat in a female dog is usually between 6 and 18 months. The AKC recommends that females should be bred in their second or third heat for good dog welfare (and not before). Females, at that fertile age are at their fertility prime time.

Age of the Stud

The age of the male will affect the size of a litter but much less than the age of the female will. When a male dog gets older, his sperm count and the quality of it will decrease. Larger litters will most likely occur when the male dog is under 5 years of age as it is easier for the sperm to enter the female’s eggs, and the majority of the sperm is of a higher quality.

This is why the most famous dog show champions are bred extremely often and intensively in order to impregnate as many quality dams as possible. But this can lead to the popular sire syndrome.

Health of the Dam

Health plays a vital role in litter size. In summary, both parents need to be in excellent health to maximize their chance to have more puppies.

Dogs that are not genetically sound and healthy will inevitably tend to have a smaller puppy count. A healthier and slimmer female’s chance of a larger litter is greater than those who are overweight. Adding in a little more protein or extra protein supplements to the diet during pregnancy will greatly reduce the chance of having a smaller litter size. It is best to feed the female dogs high-quality dog food with no supplements.

Diet of the Dam

A female fed poorly will not give her body the required support in order to produce a larger litter; therefore, providing a quality diet throughout the year is key to your female’s health and, well-being, and thus improves her fertility.

In a study by Russ Kelly, a renowned nutritionist, three dams were fed three different diets:

A balanced diet without any supplements produced the largest litters. Diets too high in protein seemed to produce smaller litters. High doses of supplements (e.g. cottage cheese) may have caused fetal abortions.

The study’s findings were that supplementing top quality formulated dog food along with small rations of cottage cheese could increase the size of the litter at a health cost.

Size of the Gene Pool

Breeding in limited gene pools, such as dogs coming from smaller breeding groups where genetic diversity is very limited, is known to produce a (much) smaller litter size of puppies.

Many traits have high heritability, but fertility is definitely not one of them. Heritability has about a 10-15% influence over litter size, this means that one cannot rely on genes for increasing the size of the litter alone.

On the other hand, it is useful for dog breeders to know inheritable traits in dogs such as:

Can the Breeder Increase the Size of a Litter?

Breeders have had light success in influencing puppy counts by using different techniques such as selective breeding and pedigree analysis. It’s hard to know whether these successes resulted from pure luck or actual biological or physiological mechanisms that increased the puppy count.

Things such as diet, breed type, and health of both the mother and father will definitely influence the size of the litter, but nobody knows to what extent.

A dam bred between 2 and 5 years, and fed a quality diet, and in perfect health and top nutrition, is more likely to have a larger puppy litter size than a malnourished female. A stud of a younger age is more likely to produce high-quality sperm, which in return can have an outcome of a larger litter size.

It is important to keep in mind that no matter the age of the dam or stud, the first two litter will often be smaller than the following ones.

The bottom line is that influencing the size of a puppy litter is almost impossible if you want to do it precisely. Otherwise, you can follow all our pieces of advice above and put all the chances on your side, but nothing is sure.