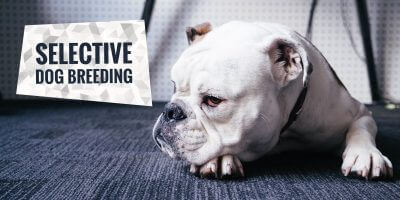 In the wild, animal reproduction is dictated by circumstances and the will of each animal to mate with one mate over another, this is called natural selection. What humans have brought to the table is selective dog breeding: hand-picking who is going to breed who.

The most obvious examples of selective dog breeding are purebred dogs, but selective breeding commonly happens at every supervised and planned breeding. On the other hand, random breeding and selecting two partners randomly.

What is Selective Breeding in Dogs?

Indeed, dog breeding can be done in two different ways:

Selective breeding in dogs simply means the partners are selected by the breeder who will make sure both dogs will mate together. There are often a reason why a breeder wants these two dogs to breed together, and they include:

Usually, breeding selectively means that the breeder has a breeding program with short and long-term goals he is trying to reach. Each breeding and the resulting litters are a step towards this goal where the breeder can assess where he succeeded, and failed, at.

Selecting the dogs we want to breed offers incredible advantages over letting Mother Nature follow its course. These advantages are self for some but others are mainly for the dog’s sake (usually health-related benefits.) We’ve listed below some clear advantages in favor of selective dog breeding.

Specialization of the Dogs

The first use of selective breeding in dogs is to specialize the dogs, even more than being a purebreed. Long before Kennel Clubs were born, for centuries humans have domesticated and specialized the dogs to perform specific tasks. Obviously, each purpose-filled dog had to embed different qualities essential to excel at what their were meant to do:

All these types of dogs then gave us the breeds we know today, such as the Border Collie as top herding dog, the English Bulldog as a bullfighter, the Chihuahua as a family dog, and so it goes.

It tooks decades and dozens, if not hundreds, of breedings to get to that level of perfection in the tasks these dogs are meant to perform. Obviously, most Border Collie owners today are not shepherds, but these dogs are still designed to excel on mountains herding sheeps.

Each dog breed has an official breed standard which is a set of clear guidelines on what each body part of a purebred dog should look like, but also what temperament specimens within the breed should display.

These breed standards are a few decades old in most cases but they do the job of saying what each breed should look like. These constraints are not decided arbitrarily but are based on the requirements for a dog from a given breed to perform his tasks as well as possible.

While having purebred dog breeds comes with a bunch of responsibilities for dog breeders, the concept started for a good reason and it is benefiting all of us today in various situation (e.g. bomb sniffing dogs, guard dogs, avalanche rescue dogs, etc.)

Within each official dog breed, a breeder may choose to start his own bloodline. In dog breeding, a bloodline is a kennel‘s set of dogs that share some blood but also characteristics over several generations. The dogs belonging to a bloodline should be bred with a set of specific needs, traits and features in mind.

The word is often misused and is very often used as a synonym to family tree or family name. Many breeders also use the name of their bloodline as a brand to try and inflate prices. While really, a bloodline is some sort of breed within the breed – on a much smaller scale, obviously.

We have discussed what we want so far, because be often think of breeding two dogs to pass on their strengths onto a new generation. However, selective dog breeding is very much about removing what we do not want for the next generation, and further.

Undesired traits include a lot of genetically-driven features a breeder may wish to get rid of:

The removal of a particular characteristic or trait may take one breeding to succeed, or many more. It very much depends on how many genes are influencing the studied characteristic and how many combinations (or breedings) it will require to reach a completely successful litter, ridded of the unwanted feature. For example, breeding healthier bulldogs takes generations because of the accumulated amount of issue there are to fix.

When two dogs pass their genes to their offsprings, everything gets passed on, half of one and half the other. Not just the good, not just what we planned to reinforce, but everything.

People focusing on breeding dogs with longer coats will also breed some genes responsible for hip dysplasia in a given dog, and if the other partner shows similar signs, the future generation surely will display a beautiful coat, but the offspring’s body structure will also be poor. For decades, dog breeders have been passing traits resulting in various diseases, and when they decided on a breeding, they probably were not even aware of the presence of such and such potential inherited conditions.

We’ve listed some clear problems that occur, or can occur, with selective dog breeding.

Closed gene pools are extremely problematic when you end up, decades later, with a brachycephalic breed of dogs who all display a disease-friendly too flat face. It becomes impossible to get out of this situation because the few dogs that were having a better head are now dead, and flat faces are the only genetic option available. In this situation, the only way out is outcrossing (i.e. to accept external blood and open the gene pool) for the sake of health and survival. This happened with the Dalmatian (see The Dalmatian Heritage Project) and the discussion is slowly taking place for the English Bulldog.

Also called the coefficient of relationship, it gives a measure of the degree of consanguinity for an individual dog by taking into account his pedigree. The more ancestors we have data on, the more accurate the coefficient of inbreeding will be.

Inbreeding is the fact of mating dogs who are closely related, therefore ensuring the traits desired will be fixed and passed on to the next generation. However, inbreeding and linebreeding also pass on diseases and also make sure they are part of the next generations. It is a very useful tool when dealing with simple biological beings, but for animals such as dogs, you are inevitably create a problem over several generations.

Because purebred dogs inevitably all come from the very same small group of dogs who were originally used to establish the breed, the coefficient of inbreeding often goes up as years pass. It is avoidable if breeders carefully checked the pedigrees of each dog to spot bottlenecks and common ancestors. A breeder ideally wants to keep the degree of consanguinity as low as possible to ensure a wide genetic variety, resulting in a healthier dog overall.

The popular sire effect occurs when a specific stud becomes so popular that he is requested for numerous breedings, usually using artificial insemination. Such a large number of breedings in the sire’s lifetime results in the future generations sharing too much genetic material in common, therefore prone to congenital and inherited diseases.

By now, we know that inbreeding is a bad practice. The popular sire syndrome is an example of how too much can quickly happen, and this syndrome is still very common today. The popular sire syndrome is a direct consequence of selective dog breeding to the extreme, especially with breeders practicing grading up (where the same dog, usually a stud, is used over several breedings with, at each breeding, a the best partner or candidate from his own descendants).

Most cases of popular sire syndrome take place once a stud has been awarded a Champion and also gave birth to one or multiple champion dogs. Other dog owners will believe that dog has a strong semen passing on most of his ‘winning’ genes. As a result, he will be requested for numerous stud services. You can read this PDF from the American Kennel Club, it’s very informative.

Other Sources of Information

Selective breeding is heavily used in the farming industries and agriculture (source); however, dog breeders are somewhat being seen as cruel due to cases of abusive selective dog breeding. The main illustration is bulldog breeding and the horrid situation the breed is facing today – no mutt would reach such a high level of inbreeding!

Internet is filled with great reads on selective breeding in dogs and most articles are partial to one side or the other, but they are worth a quick read:

Make sure you share this article to enlighten people on the controversial topic of selective dog breeding. As we always do with touchy posts (who said back to back breeding?) we try to stick to the facts and remain impartial.