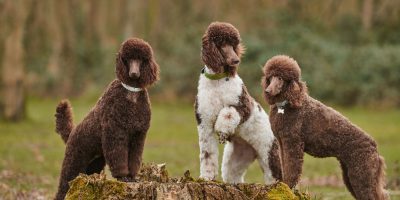 One of the most talked-about Poodle varieties is the parti Poodle. All Poodle varieties are highly intelligent, energetic, and sociable. These dogs require extensive physical and intellectual activities. Any snappy or vicious behavior is a serious fault in the breed. All of these qualities make them excellent working dogs.

What Are Parti Poodles

The United Kennel Club describes the parti Poodle under the “multi-colored Poodle” section. Under this standard, a parti Poodle is at least 50% white. These dogs have spots or patches of any other acceptable color. Under the UKC, accepted colors include apricot, black, blue, cream, gray, silver, red, white, silver beige, and all shades of brown, including cafe-au-lait. The head may be a solid color, but a white muzzle or blaze is also acceptable. A full or partial saddle is also acceptable as long as it does not exceed the 50% color proportion. Finally, ticking in the white of the coat is acceptable, but not desirable.

The parti-pattern comes from a specific gene. This gene is the microphthalmia-associated transcription factor (MITF). The MITF gene acts as a regulator of your dog’s pigmentation. An insertion within this gene disrupts pigment production, resulting in non-pigmented areas of the coat. Testing your dog for the S Locus (white spotting) can reveal which genotype they have. If your dog has two copies of S, their coat is solid with no white spotting. This dog passes on one S copy to all of its offspring. In contrast, a dog with one S and one sp will show small amounts of spotting, flash, or parti patterning This dog passes on one S to 50% of its puppies and one sp to the other half. Lastly, a dog with two copies of sp will be nearly solid white or piebald.

How Are They Different

There are a few things that set the parti Poodle variety apart from the others. These include its disqualification from AKC conformation, problems with backyard breeding, and the “exotic” label that comes along with it. Overall, though, a parti Poodle is just like any other Poodle variety.

Under the AKC breed standard for Poodles, particolored dogs are disqualified. This means that parti Poodles cannot enter conformation shows with the AKC. Instead, they may only participate in agility and obedience. But why are parti Poodles undesirable in the AKC? Curiously, many of the early prints of Poodles show them with parti patterning. Over time, breeders sought to separate the Poodle from its ancestors and selected for solid colors rather than the original parti coat variety. This led to the parti becoming undesirable. Today, this undesirability persists in several kennel clubs. This is also largely because the Poodle Club of America (PCA) is yet to change its standard. To date, its standard still states that partis should be disqualified.

A similar theme runs with other kennel clubs.

These Poodles may enter UKC shows under the “multi-colored Poodle” label. The UKC defines a particolored Poodle as a Poodle that is at least 50% white with spots or patches of any other acceptable color. They also accept ticking in the white of the coat, though it is not preferable. A Poodle with less than 50% white in its coat is an “abstract” Poodle. For conformation exhibition, solid and parti Poodles are shown separately. They clarify on their website that the two varieties are not separate breeds.

Unfortunately, parti Poodles are among the victims of poor breeding practices. While parti patterning is completely natural in the Poodle, many money-driven breeders will breed these dogs to sell them for their “rare” colors. This means that responsible breeding tends to take a backseat to produce the flashiest dogs. With a focus on color rather than conformation, temperament, and health testing, some parti Poodles suffer entirely preventable issues later on. While there is no evidence to suggest that parti Poodles have any particular health problems due to their coat, poor breeding may lead to a higher risk of common Poodle diseases. These include Addison’s disease, progressive retinal atrophy, and thyroid issues. However, many parti Poodles come from reputable breeders. Be sure to support reputable breeders or shelters, rather than buying from a breeder who focuses solely on coat color.

With their undeniable beauty, parti Poodles are targets for backyard breeders. This has led to some problems. To begin, there is little research that suggests that Poodle coat color affects the breed’s temperament or personality. Anecdotally, most owners find that there is little to no variation between their dogs based on coat color alone. While it is still possible for there to be a link between coat color and temperament, it is more likely that when one breeds for color, there is more irresponsible breeding in certain lines that can make difficult temperaments more likely. Because of this, it is important to support reputable breeders who do not simply flaunt parti Poodles as “rare” or “exotic”. Those that breed solely for color are less likely to select for good temperament and soundness.

The same can be said for other Poodle coat varieties. For example, merle “Poodles” are often sold as “rare” and “exotic” new varieties. The truth is that merle is not a naturally occurring color in Poodles. Overall, be wary of breeders who try to push their “new” color varieties onto you. These dogs are likely not purebred Poodles. Most reputable breeders will not charge more for different coat colors.

Have any more questions about parti Poodles? Feel free to check out our Frequently Asked Questions section for more information. If in doubt about your Poodle’s health, it’s always best to ask your vet for advice.


Despite any misconceptions, parti Poodles are just as purebred as other varieties. Their white patterning does not come from any other breed. Instead, it comes from insertions in the MITF gene. Mutations in this gene can occur at any level – so, even two solid-colored parents can produce a parti puppy. Despite this, many people mistake parti Poodles for “Doodles” or other crossbreeds. Recently, there have been efforts to introduce the merle gene into the Poodle through crossbreeding. However, some breeders pass off these merle puppies as pure Poodles, despite the fact that merle does not naturally occur in the Poodle. Be aware of dog breeders who put too much emphasis on the “rare” and “exotic” colors that they produce. Not only do they risk losing focus on their dogs’ temperament, conformation, and working ability, but their dogs may not be purebred!

Are Parti Poodles recognized by the AKC?


Parti Poodles are recognized by the AKC and litters can register with them. However, they cannot be shown in AKC conformation events. Instead, the parti Poodle may only participate in obedience and agility competitions. Similarly, parti Poodles face disqualification under the CKC and the FCI. While partis may face restrictions with the AKC, the UKC is much more lenient with them. Under the UKC, a parti Poodle can compete in any event. However, they must participate in separate conformation shows, away from solid Poodles.

What is the rarest color of Poodle?


To date, the most uncommon Poodle coat color is apricot, and it’s also the last Poodle color to be recorded. Apricot Poodles vary somewhat in color, but these variations are not a fault under the AKC breed standard. Most often, an apricot Poodle will have black points, but liver points are also acceptable. As an apricot Poodle matures, their coat color may lighten or darken. Overall, though, a reputable breeder will usually not price their “rarer” color puppies any differently. If a breeder puts focus on their puppies being “rare colors”, it’s best to talk to other breeders before making a purchase.

Are Parti Poodles and Phantom Poodles the same?


Parti and phantom are different Poodle coat varieties. Although both coats are made up of two colors, phantoms differ in that the colored patches are set on a solid background. This is in contrast to the parti, in which the colors sit on a white background. In a phantom Poodle, the solid background is usually black, cream, apricot, white, silver, or brown. From here, these dogs can be broken down into more detailed groups, such as black phantoms, chocolate phantoms, red phantoms, and silver phantoms.

How do you get Parti Poodles?


Since the MITF gene is recessive to solid colors, you must pair two partis to produce a parti. However, the color combinations and landing areas of color are not predictable. As such, you may find that, within the same litter, you may produce a black and white parti as well as apricot and white parti. It’s also common to “randomly” produce a parti puppy when pairing two dogs that carry the gene.

Parti Poodles are at least 50% white with patches of color. Their head can be a solid color and a full or partial saddle is also acceptable. Although parti Poodles cannot participate in conformation shows under the AKC, they excel just as well in obedience and agility.