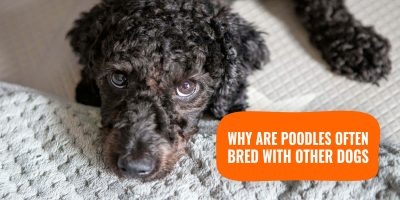 Originally bred for hunting & water retrieval in Germany, Poodles are one of the oldest purebred dogs in existence. But in recent years, Poodle mixed breeds, or ‘doodles’ as they are affectionately known, have become exceedingly popular. This is probably because mixed or crossbreeds, previously known as mutts, are now considered to be ‘designer’ dogs. But why are Poodles the most popular choice to be bred with other dogs?

Poodle mix breeding is a relatively new thing. The original ‘designer’ breed, the Labradoodle, a Poodle-Labrador mix, is thought to have been first bred in the 1950s. It likely started by accident, but Poodles are now the most popular dog breed used for crossbreeding in the world. They currently lend their genes to around 70 mixes with other well-loved breeds, and there are several reasons why.

Why Are Poodles Mixes or Doodles So Popular?

Crossbreeding is about mixing the desirable characteristics of different breeds, and the Poodle certainly has plenty of those!

The Poodle’s beauty, elegance, and fluffy coats are universally recognizable. They are cute, graceful, unique looking, and come in all different colors, shapes, and sizes.

Poodles have been the subjects of artistic works for centuries. They have also consistently & successfully competed at kennel club competitions since the beginning of said institutions in the 19th century. In recent years, they are a prevalent sight in the fashion industry, accompanying models on runways & in photoshoots for magazines.

Due to their fashionable nature, people have been known to overlook the Poodle’s intelligence in the past. But make no mistake, these dogs are by far one of the brightest & cleverest breeds around. In fact, according to experts, their level of intelligence is second only to the brainiac Border Collie.

Because of their fantastic intelligence, they require just as much (if not more) mental stimulation as they do physical exercise. And they make fantastically fun companions because of it!

Poodles are an extremely gentle, faithful, and empathetic breed, making them the perfect choice of dog for families with children. They also get along with other dogs and are friendly towards strangers.

Poodles are protective and loyal to their families. They like to cuddle and are have outstanding empathetic sensitivity. They are also extremely trainable due to their intelligence and obedient nature. Because they are highly intelligent, they love to play games and solve puzzles. This makes them fabulously fun family members to have.

One thing that makes Poodles such a great dog breed to mix is their range of sizes. Some people like bigger dogs, some people like smaller dogs, and Poodles can fit the bill either way. They come in three different sizes; Toy, Miniature, and Standard, and each size can be mixed with another similar-sized breed.

The smallest is the Toy Poodle, who, on average, stands at about 10″ tall. They weigh between 5 – 9 lbs, depending on the gender of the dog. Toy Poodles are bred with other toy and small dog breeds, creating small Poodle mixes like the Maltipoo (a Maltese Dog mix). Slightly bigger, the average Miniature Poodle is about 15″ tall and weighs between 12 – 20 lbs. Miniature Poodles can be bred with similar sized breeds to create medium-sized mixes like the Cockapoo (a Cocker Spaniel mix).

The biggest variety of Poodle is the Standard Poodle. On average, they stand at around 20″ tall and weigh between 45 – 70 lbs. These Poodles are crossed with other medium-large breeds to create larger poodle mixes, like the Goldendoodle (a Golden Retriever mix).

No dog’s fur is completely non-allergenic. However, Poodles and the majority of their crossbreeds are among the closest you can get. Their coats are hypoallergenic, meaning unlikely to cause an allergic reaction, as it has very low allergenic properties.

The majority of Poodle crossbreeds coats also don’t shed very much. Some don’t shed at all. This makes them an ideal choice of dog for people who are generally sensitive or allergic to pet fur. Completely non-shedding Poodle mix breeds include Goldendoodles, Cockapoos, and Maltipoos.

Poodle coats do, however, typically require weekly grooming and bimonthly clipping due to their curly, fuzzy nature. If left ungroomed, their fur can become matted. In severe cases, this can stop air circulation, causing blood circulation issues, skin irritation, open sores, and even infection.

All dogs are vulnerable to certain health conditions, but crossbreeds generally have better overall health than purebred dogs. This is because of something called Heterosis or ‘hybrid vigor’. In which, the chances of genetic diseases passing on to the next generation is significantly lower in mixed breed dogs than in purebreds, because of their greater genetic diversity. For the same reason, crossbreeds are also more likely to live longer than purebred dogs.

However, Poodle genes, like all breeds, do come with certain predisposed sicknesses. And it is still possible that they will be inherited by the mixed breed. Different sized Poodles come with their own health risks. But all sized Poodles are naturally susceptible to epilepsy, thyroid issues, and hip dysplasia among some other things.

In some cases, a health problem may be common in both of the breeds that have been mixed. This makes it twice as likely to occur in the crossbreed. Addison Disease, for example, is a common issue in both Poodles and Labradors. As a result, it’s also common in Labradoodles.

However, the downside to this is that some breeders are irresponsible. They prioritize creating a new mix that looks unique or cute over the dog’s health. Sometimes two breeds’ genetics just aren’t compatible. Forcibly mixing them together creates an unhealthy dog that will have a short, problem-filled life. Always do your research when looking for a new four-legged family member and adopt from reputable shelters and/or breeders.

What is the best breed to mix with a Poodle?

There is no universal ‘best’ breed, all dogs are beautiful and special. What the best mix is for you and your family, however, all depends on what your needs are, and what you’re able to provide. Different breeds of dogs have different physical requirements and personality characteristics, so do your research before committing to a dog.

For example, all dogs need daily exercise, but if you want a dog that is super active and loves a lot of it, a larger poodle mix, such as a Goldendoodle (a Golden Retriever mix) will likely be best for you. If you want a ‘lazy’ poodle mix that doesn’t need or like a lot of exercise, a small crossbreed such as a Yorkipoo (a Yorkshire Terrier mix) may be a better choice for you.

What is the cutest Poodle mix?

All dogs are cute and deserving of love! But, again, whatever is the ‘cutest’ breed mix to you will all depend on what you like. For example, do you prefer bigger or smaller dogs? Dogs with longer hair or shorter hair? Etc.

That said, the most popular Poodle mix breeds currently in the US are Cockapoos (a Cocker Spaniel mix), Maltipoos (a Maltese Dog mix), Labradoodles (a Labrador mix), Goldendoodles (a Golden Retriever mix), Schnoodles (a Miniature Schnauzer mix), Peekapoos (a Pekingese mix), and Yorkipoos (a Yorkshire Terrier mix).

What is the smartest Poodle mix?

Are Poodles good with other dogs?

Poodles are a gentle breed, and unless they have some kind of past trauma, almost always get on with other dogs and human strangers.

Smaller Poodles, however, can have a tendency to be overprotective of their families around strangers and other dogs. So if you adopt one, make sure to socialize and train them early on to avoid this.

Poodles coats are hypoallergenic. While no dog’s fur is completely non-allergenic, Poodles and their crossbreeds’ are among the closest you can get, as their fur has very low levels of allergenic properties.

The majority of Poodle crossbreed also have low-shedding coats, minimizing the effect allergens would have on a sensitive owner. Some, though, don’t shed at all. Completely non-shedding hypoallergenic Poodle crossbreeds include the Goldendoodle, the Cockapoo, and the Maltipoo.

Hopefully, this article has answered the question of why Poodles are often bred with other dogs. Are you a Poodle fan? What do you think is the cutest Poodle mixed breed? Let us know in the comments down below!