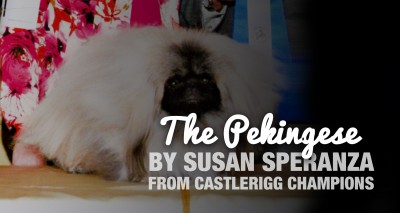 Legend has it that once upon a time a lion fell in love with a marmoset. But their disparate sizes made love impossible so the heart-sick lion asked Ah Chu, the protector of animals, to shrink him down to the size of his beloved. Only his large lion heart remained. From the union of this great love, the Pekingese (or the Fu Lin – Lion Dog) was born.

The Old Days Of The Pekingese

The existence of Pekingese as a breed can be traced back to the 700’s in China where they were kept as Emperor’s dogs. They lived a life of royalty within the Forbidden City in Peking (now Beijing). Anyone caught stealing or harming one of these little dogs was put to death.

They were scaled down in size, some to 3 lbs. These small dogs gave rise to the modern-day name of “sleeve” Pekingese from the fact that they were often carried around in the large, billowing sleeves of the Royals’ silk robes.

These five Pekingese were taken by the British and sent to England. One was presented to Queen Victoria, two were given to The Duchess of Wellington. The final two were given to The Duke and Duchess of Richmond and Gordon. These five became the foundation for the modern-day Pekingese. The breed gained popularity in England, Ireland, and France, during the late 1800s. They were first shown in Britain in 1893. The Pekingese came to America soon after and The American Kennel Club recognized them as a breed in 1906, while first registering the breed in 1915. The Pekingese Club of America was established in 1909 and the first Pekingese were shown in the United States in the same year.

Information about the breed is scarce from the time they first arrived in England to the time they began to appear in Kennel club registries around the world. For a long time, the breed was somewhat exclusive, due to the small number of breeding dogs in Europe. They continued their royal lives as many were owned by wealthy and famous people of the day. Sun Yat-sen, a Pekingese belonging to Henry and Myra Harper (of the Harper & Row publishing dynasty) was aboard the doomed Titanic but lived when he was put under a coat and carried onto a lifeboat by his owner.

The Pekingese & Its Breeding, Now

The Pekingese of today resembles the Pekingese of those original five in the enveloped shaped head, flat muzzle, and rolling gait brought on by their bowed front legs and broad chest and lean hindquarters. However, through the years the Pekingese have evolved where they now sport exceedingly long coats that often hide rather than accentuate the contours of their body.
They have been scaled down in size, some sporting very short legs, and very cobby bodies, but have retained the weight and bone of their ancestors.

While Pekingese has grown in popularity beyond the exclusive group, they still are not considered a breed for everyone. They have retained their large lion hearts which makes these little dogs fierce and somewhat dominant in temperament. They are not high energy dogs, but they are intelligent and loyal and love to be wherever their family is. They cannot be ordered to do anything, but they must be convinced that it is in their best interest to do something. Once an owner understands this, their Pekingese will be wonderful to live with. Because of their intelligence, they are interesting to live with; they have very endearing personalities.

As breeders, we have tried to breed to the standard through the years. However, as in every breed, there is always the element of interpretation of the standard. When a standard says the head is large in proportion to the body, how large is large? When it says the body is low to the ground, how low should it be? It is in the interpretation of the standard that changes creep in through the years and the Pekingese of 2015 is clearly different than the Pekingese that was taken from the Forbidden City over 150 years ago.

Since we don’t have health records of the early Pekingese, we have no way of knowing if they had similar health issues to the modern-day Pekingese. But some of the health problems that now exist – back problems in the form of herniated discs and breathing problems may well be a function of the breeding for heavy bone, low slung fronts, and short muzzles. Pekingese as with any dog is a living, breathing creature, and breeders who are tasked with the job of constantly improving the breed while breeding to the standard are often put in an impossible situation of controlling the uncontrollable. While many breeders do a conscientious job, we have to recognize that dogs are living creatures with complex genetic systems and there are some things we may not be able to control or fix with every litter. It doesn’t mean we shouldn’t try. Rather it means that we may not succeed no matter how hard we do try.

I got into Pekingese the way many people do – my then-husband and I fell in love with a white, flat-faced puppy in a pet store. This pet store Pekingese grew larger than the standard, but her intelligence was evident from the outset so I began doing obedience with her and got her as far as one leg toward her CDX before back problems set in. Muggs was always a great competitor and working with her led me to dog shows and brought me in contact with “real” Pekingese and Pekingese breeders. It was soon after in 1993 that I obtained my first show dog (Ch. Calico’s Merci Beaucoup). The rest is history.

When I first began, some older breeders told me that Pekingese were considered the “heartbreak” breed – it was hard to get them pregnant, hard to keep them pregnant, hard to get the puppies to whelp, to live, to grow…one breeder told me that she believed Pekingese puppies had a will to die. I had a difficult time accepting this and set about finding solutions to some common problems. I discovered that a lot of the problems, particularly fading puppies often occurred because of poor litter management. I found Veterinarians willing and able to do C-sections only when the bitches temperature drop but before they began hard labor. I grilled them on their choice of anesthetic and allowed only certain protocols to be used. Once home, I separated the bitch from the puppies for safety reasons and made sure that every two hours around the clock I put the puppies on the bitch to nurse. I took their weights before and after nursing to see if they were actually getting any milk, which oftentimes after a C-section didn’t come down for 24 or more hours. I would then supplement them by tubing them if I felt they weren’t getting enough. I also gave Mama Esbilac in a syringe or if she would eat it, Vanilla Ice Cream, to make sure her calcium levels were up and to help her milk come down. Newborn Pekingese puppies are notoriously bad nursers. Yet it is the nursing that brings down the milk. Eventually, this schedule always works, the milk comes down, the puppies learn to nurse and I can get some sleep. But for the first 3 weeks, I weigh them continuously and if they are not gaining, I supplement them, then make sure they nurse. This may be an extreme form of litter management, but it has worked for me and after my first few losses earlier in my career, my litter survival rate is now 100%.

I have contemplated through the years of adding another breed to my life, but I haven’t found any other breed of dog that has captured my heart the way Pekingese have. As I look to my future, I know that it will always include a few Pekingese resting at my feet and that these Pekes will trace their lineage back not only to my earliest beloved Castlerigg Champions but to those five brave little dogs who crossed the ocean from China to England to stamp their beauty, love, and loyalty on my heart.