So, you’ve just brought home your new puppy, and you’re eager to start training and bonding with them. Or, your dog just had her own pups, and you’re ready to help raise them. In either case, to embark on your exciting journey with your new furry friend, it’s best to research the normal development of a puppy first.

Puppy development occurs through many unique stages, including fear periods and socialization periods.

To help your puppy to grow up happy and healthy, it’s important to know what they need through each phase in their development. For example, it’s vital that you, as a responsible owner, understand when to get your puppy vaccinated. You will also need to know when your puppy’s most crucial psychological developments occur. Your puppy will experience a canine socialization period as well as a human socialization period between their birth and 12 weeks old.

Puppies also undergo a fear period. Any frightening experiences during these periods can cause life-long phobias of certain objects, people, and experiences. Ready to learn more about your new fur baby’s development? Read on!

From birth until 12 weeks, your puppy will undergo many exciting changes and developments. Some weeks will bring more changes than others, and some are more significant to your pup’s psychological growth than others. To ensure that your little one grows to be as healthy and happy as possible, it’s best to know what they need every step of the way.

A one week old puppy has a fully functional sense of smell. Puppies of this age use their sense of smell to find their mother’s teats and to locate their littermates. Most puppies open their eyes partially or fully within seven to fourteen days of their birth. However, their retinas are poorly developed and their vision is quite poor. In addition, your puppy’s canine socialization periods begin at this time. The canine socialization period lasts for 12 to 16 weeks! This means that early socialization with their littermates is vital to their mental development.

Two week old puppies begin their transitional phase. This is an exciting phase for both owners and puppies alike! At two weeks old, puppies should have their eyes open, be alert, and trying to stand on their own. Two week old puppies are still deaf and mostly dependent on their sense of smell to get around. However, these fur babies will quickly gain independence with a little help from their mother and siblings. Puppies should be de-wormed at 2 weeks old.

A three week old puppy gains more strength. At this stage, puppies start to stand, walk, and sit without falling over. As well as this, a three week old puppy’s teeth will begin to come through, with the incisors appearing first. With this rapid increase in function, puppies can begin to socialize with each other and their mother. Puppies begin to learn that they are dogs and start to explore the world around them. During this time, it’s crucial that the puppies are kept primarily with their mother and siblings. As well as this, puppies have little fear at this age. This is the optimum time to startle them with new sounds and sights to develop their startle and recovery response.

By four weeks old, puppies should be able to walk, run, and play! They can hear, smell, and see and their canine teeth are growing in next to their incisors. When they play, four week old puppies will begin to exhibit distinctive body language such as play bows, as well as growling. Four week old puppies are much more independent. At this age, puppies begin the weaning process, transitioning from milk to solid foods in small increments. Four week old puppies are also learning to control their urination. Week four marks the end of the transitional phase for a puppy. Finally, puppies should be de-wormed again at 4 weeks old.

A five week old puppy continues to learn from and socialize with their mother and littermates. During this time, puppies learn more bite inhibition through play. The weaning process also continues at five weeks. Your five week old puppy should gradually be moving on to solid food instead of nursing from their mother. Be careful to not push the process too quickly at this time. Abruptly changing your puppy’s diet not only causes gastrointestinal upsets but also contributes to behavioral problems later in life.

Although a 6-week old puppy is more independent, all 6-week old pups are too young to leave their mother. At this age, they are still socially developing and learning how to be dogs. Because they are so keen to learn, many owners begin toilet training their puppies at 6 weeks old. It helps to start by laying newspaper in your puppy’s house and showing them that they should use the newspaper when they need to answer nature’s call. As well as this, your puppy’s first vaccinations should be given at 6 to 8 weeks old. Your puppy needs vaccines for distemper, measles, and parainfluenza. These consist of two or three injections, typically given 2 to 4 weeks apart. To add to this, puppies should be de-wormed a third time at 6 weeks old.

Some puppies complete the weaning process by 7 weeks old. In addition, at 7 weeks old, your puppy is undergoing a human socialization period. This is the most critical period for socializing your puppy with people! During this time, it’s important that you help your puppy to become acclimated with all types of sounds, sights, and smells in a positive way. Proper socialization can prevent your puppy grom becoming afraid of children, for example.

By 8 weeks old, puppies are independent, are fully weaned, and usually ready for their new homes. Their human socialization period is in full swing, so it’s your responsibility to continue to introduce your puppy to other people in a positive manner at 8 weeks. As well as this, your puppy’s first fear period begins at 8 weeks and continues up to 10 weeks. During this period, your puppy is more sensitive to traumatic experiences.

One scary event can be enough to traumatize your puppy for life and can have life-long effects on their behaviors as an adult. Puppies should be de-wormed a fourth time at 8 weeks old. Your puppy’s first vaccinations should be given at 6 to 8 weeks old. Your puppy needs vaccines for distemper, measles, and parainfluenza. These consist of two or three injections, typically given 2 to 4 weeks apart.

At 9 weeks old, most puppies are settled into their new homes. Your puppy should begin basic training at this age. Although they should have learned some bite inhibition from their littermates, your pup will also need to learn boundaries when playing with people. Although they are only playing, a puppy’s sharp teeth can be painful. As such, it’s important to teach them not to bite too hard early on. When they bite too hard, signal your pain by saying “Ouch!”, and ceasing play.

Your puppy needs another round of vaccinations at 10 to 12 weeks old. The vaccine typically given is the DHPP vaccine. This consists of vaccines for distemper, adenovirus, parainfluenza, and parvovirus. By this time, your puppy’s fear period should have ended as well.

By 11 weeks old, some puppies are well on their way to being experts in basic training. Some 11-week old pups master the basics such as sit, come, and stay. However, this is not true for all 11-week old puppies. Some continue to bite too hard, have accidents, and cry when left alone. These are normal occurrences for a puppy of this age, so don’t fret. Continue training your puppy daily and keep up your excellent care!

Check out these amazing YouTube channels, these podcasts, or these blogs, to learn more about training dogs.

At 12 weeks old, your puppy requires more vaccines and medication changes. Puppies should be de-wormed at 12 weeks of age. Once your pup has reached this age, you can continue to treat them every three months with de-worming medication. At 12 weeks, you should also consult your vet about heartworm preventatives for your puppy. This is also the earliest age that a puppy can receive their first rabies vaccine! After the first vaccine, your pup needs a booster one year later.

Most breeders agree that 8 or 12 weeks are equally acceptable ages to rehome puppies. Whether puppies leave younger or older is ultimately down to the breeder’s preferences.

Eight weeks is the traditional age for puppies to leave their mothers. At eight weeks, puppies are eating solid food, no longer need to nurse, and are fully mobile. They should also be well-socialized with people and other dogs at this age if the breeder has made the effort. On the other hand, some breeders prefer to keep their pups for 12 weeks. This is especially common with breeders of toy breeds. Toy breeds can be quite fragile and may be slower to mature compared with medium and large breeds. A few extra weeks with their littermates can be safer for smaller puppies. In addition, a responsible breeder will make sure that their 12-week old puppies are well-socialized and independent before sending them away to new homes.

What Age are Puppies the Worst?

At around five or six months a puppy will go through their ‘teenage phase’, which will last until the age of 18 months. Sadly, the average age for puppies entering animal shelters is 18 months. According to one study, the age that dogs enter public shelters is decreasing each year. In 2002, the average age was over three years. By 2012, the average was closer to two years. This is partly due to the adolescent phase that puppies go through as they grow into mature adults. Puppies become “teenagers” at five to six months old. This phase typically finishes at around 18 months of age.

With a little knowledge and preparation, you will find that you can deal with the changes in your teenage pup with your relationship intact. Your teenage pup is more likely to go “self-employed.” This means that your pup might listen to you less, wander further when out on a walk, and will be less likely to respond when you call them. Some owners find that their puppies seem to “forget” their training during this time. It’s important that you don’t punish your adolescent puppy during this challenging time. Go back to basics with training, and be aware that their second fear period is taking place as well.

What are the Stages of Puppy Development?

Your puppy is classed as an adult at different times depending on their breed. In general, puppies become adults between one and two years old. For giant breeds, the ages of 3 to 4 years are more common. Every puppy is different, so there’s no exact time limit for your furry friend to become a mature adult.

What Weeks do Puppies Grow the Most?

During the transitional period, your puppy undergoes many important changes! This period begins at the second week of a puppy’s life. Their eyes and ears, sealed at birth, begin to open. In addition, puppies begin to stand and walk during this period! With these exciting new developments, puppies are able to explore and interact with their environment, to play with one another, and to learn how to be a real dog. The transitional puppy will also gain more independence and can control their need to potty more and more with each passing week. Your puppy’s transitional phase ends by the fourth week of their life.

After the transitional period comes the socialization period, wherein puppies can begin the weaning process and can form important attachments with people and other dogs.

As a responsible owner, it’s great to have a thorough understanding of your puppy’s development. Not only does this mean that you can provide for your pup every step of the way, but it also gives you peace of mind too. 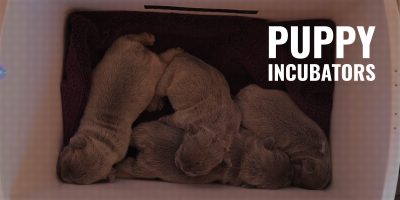 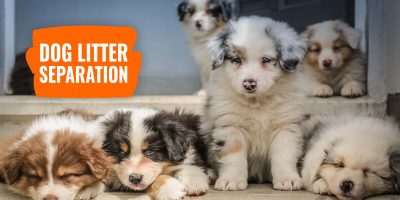