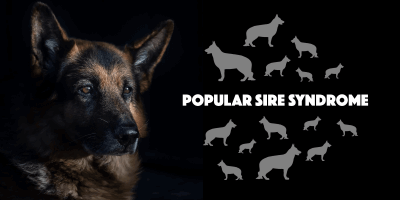 In dog breeding and within other species where shows and competitions are big parts of the community, you can be sure that the popular sire effect exists. The popular sire syndrome in dog breeding is when a sought-after male is used to father several litters of puppies, thereby having that many progenies that some of them eventually will breed together (often, unknowingly.)

Obviously, as a dog breeder or handler, you do want to breed the best dogs possible — males and females! You have clear objectives and goals outlined in your dog breeding program and each litter tries to get you closer to this ultimate ideal dog of yours. Some breeders successfully reach excellence and at times, everybody else agrees with them.

What Is The Popular Sire Syndrome?

In dog breeding, the popular sire syndrome occurs when a male dog wins a respected competition or is recognized as a one in a million dog, and consequently becomes a highly sought after sire. This is because other breeders believe that that particular sire possesses the desired genes needed to produce champions.

All breeders strive to create litters of smart, healthy puppies with the necessary genetic material to become prestigious competition winners; eventually producing more champions in due time. Therefore, such popular sire is used extensively for breeding with a vast amount of females, resulting in his genes being spread rapidly throughout the breed, vastly reducing genetic diversity.

[pullquote-right]The problem with the popular sire syndrome is that the dog’s genes are spread widely and quickly – without evaluation of the long-term effects of his genetic contribution.

Consequently, such breeding practices can have detrimental consequences for that specific breed’s population. Indeed, few generations later, there is a substantially high risk of inbred litters when two dogs descending from that particular sire innocently mate together.

Can This Happen With a Female?

Although the same logic can apply to a sought-after bitch, the constraints of a female’s reproductive cycle won’t allow her to parent as many dogs as a male. A female has several months in between each litter so even at full rate, she would be unable to compare to a stud dog.

If a female was bred repetitively, she may also see her puppy count sharply decline because of a weaker body going through too many pregnancies in a row (ie. back to back breeding.)

How Can a Sire Father So Many Puppies?

When a dog becomes a leading figure in the ring is when the chase happens!

The sire is requested for a huge number of breedings over an extended period of time. The sire is also asked for frozen semen shipments which are easier to organize for experienced breeders and unlike female dogs, studs can deliver in high numbers.

When a breeder cannot resist this newly acquired fame and the profitable fees, a lot of female dogs give birth to puppies fathered by this very same stud. The name of this stud becomes synonymous with health and success, and the loop repeats itself.

This also happens when a breed is being created since the selected breeding dogs are forming a small pool, each dam and sire is reused for multiple breedings. Inevitably leading to a relatively high coefficient of inbreeding, at first, until the gene pool widens through external blood. This is currently the case with the still-new American Bully breed.

Consequences of the Popular Sire Syndrome

There are multiple concerns raised by the popular sire syndrome.

First of all, any undetected, unfavorable genes that the sire is carrying will dramatically increase within the population as he passes them on. This could even result in creating breed-related genetic disorders.

In addition, although the number of times a female can be bred is limited, excessive use of a single male stud reduces the use of other males and drastically narrows the diversity of the gene pool. This means that a large proportion of the population will be closely related, even more so in cases of inbreeding later down the line. This becomes more apparent when the offspring of the stud are bred with each other for example in sibling breedings, half-sibling breedings, or the worst of them all – parent to offspring breedings.

When it actually happens, a popular sire syndrome occurs at such a rapid pace, by the time any mutations or undesirable effects have been picked up through evaluation of the offspring or grand-offspring, the sire’s genes have already been spread on a huge scale throughout the population. It becomes extremely hard to backpedal and fix all the wrongdoings caused by the popular sire effect. This usually means that it is too late to correct all negative outcomes that these repetitive breedings have had on the population’s gene pool. It should also be noted that the popular sire syndrome is not just an issue for smaller populations; it does, in fact, affect larger populations also.

How To Prevent The Popular Sire Syndrome?

Although a popular sire will have the same influence as the dam on a single litter, studs do contribute to far more litters over their breeding career, and will consequently have a larger influence over the breed as a whole. Therefore, it is inevitable that the popular sire syndrome will always exist, but it doesn’t have to come to terrible consequences for the breed as long as it is well-managed and thoroughly controlled.

It is also the case that for purebred dogs: there is undoubtedly limited genetic diversity to start with, as there are no new genes available to the breed unless specific directives allowed by the authorities (ie. kennel clubs) — see the Dalmatian Heritage Project for example.

Looking at the entire population of a breed, genes can only really be lost via selective breeding, rather than gained. That said, as a dog breeder you are responsible for far more than maintaining breeding records, dog microchipping, and vaccinations, especially if you are the proud owner of a popular sire. It is your responsibility to find out what detrimental genes your dog carries, and this knowledge should be passed on to the owners of the next generation.

As the proud breeder and owner of a sought-after stud, you should screen each breeding request or stud service and not just cash in on your dog’s semen. The first duty of a breeder is the make the breed better; not just to line your pockets. It is your duty to decide when enough is enough in order to prevent overwhelming the gene pool.

Breeders should strive to select sires who have the ideal attributes for the breed such as performance and temperament and stay clear of any breed-related health disorders.

Moving forward, if breeders continue to only breed healthy and exceptional specimens of a breed and stay away from the popular sire syndrome at all cost; their breed’s whole population will be protected from inherited health conditions.

For potential owners, it is important to do your research and get the homework done. Ensure that both the parents and the puppies have been cleared of any genetic mutation by undergoing genetic testing and studying pedigrees back to five or ten generations, if possible. This is especially necessary if a popular male is present on both sides of the puppy’s pedigree.

Feel free to check out Wikipedia’s article on the popular stud syndrome.