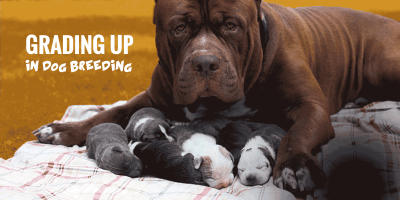 In dog breeding, grading up is a strategy where the breeder invests in a high-quality dog in order to be bred with a more average partner, drastically improving the next litter. When the same great specimen is constantly being bred to the best progeny from each litter, the overall quality of each upcoming litter becomes homogeneous and high.

However, grading up dogs is most definitely considered a type of inbreeding. Therefore, it is a double-edged sword that could be disastrous for all the upcoming litters. Linebreeding, including grading up, are very powerful tools that can make or break a bloodline.

The advantage of grading up is also how cost-effective it is. Indeed, you are investing in one quality specimen. Generally, a stud. When the alternative would require you to always organize the mating of one of your dog to a champion, setting you back from thousands of dollars each time. Add on to that the initial cost of the high-quality specimen you would need to purchase, too.

Definition of Grading Up in Dog Breeding

Grading up is the practice of investing in an exceptional dog, and then mating it with an average bitch usually a daughter or other closely related female. Many times, specific traits are bred for and the bloodline is continued to be improved upon by using inbreeding or linebreeding at each generation.

After just a few generations of grading up, the overall quality of the progenies drastically increases. However, the continued improvement in the bloodlines needs to be measured against the risk of inbreeding. Some breeds run more of risk than others. Degenerative myelopathy is a serious disease caused by a dog inheriting two recessive genes for the condition. This illness is similar to Lou Gehrig’s disease in humans. A dog will go from not being able to walk to dying.

Obviously, the specter of a serious illness like degenerative myelopathy makes true grading up a very risky strategy. The use of an external bloodline while retaining the stud makes the process of grading up take longer than it would otherwise, but it is also safer. As genetic testing improves for dogs, the possibility of using genetic testing alongside true grading up increases the efficiency while cutting down the risks associated with it. Dogs can now be tested to determine whether or not they are carriers of some recessive genes.

Views of the AKC & UKC

The United Kennel Club does not allow true grading up; in other words, litter registrations of a dog mated to its daughter are prohibited. (See our article on the UKC as a whole.)

The American Kennel Club has no prohibition so it would be up to an individual breeder whether grading up would be an acceptable risk. If the champion stud was genetically tested and found not to be a carrier of the most serious genetic diseases commonly found in the breed, then it would be more efficient to mate a father with the pick of the litter daughter (i.e. inbreeding.)

Most other dog registries, breed clubs, and registration schemes are generally imposing some restrictions in regard to how inbred a dog is allowed to be in order to be registered. Some will be more restrictive than others, but it really depends on the organization’s policies.

Use of External Blood

The purpose of grading up in dog breeding is to progress to eventually producing the ideal specimen, matching the best interpretation of the standard of the breed.

A breeder’s breeding program is a closed system where the breeder controls as many of the variables possible going into the project of breeding the perfect dog. A near perfect specimen is a big investment for the breeder.

In the United States, the AKC allows true grading up with no prohibition even in father-to-daughter or sibling breedings. A champion stud dog owned by the breeder is mated to a bitch of good qualities that complement the male’s shortcomings. If the champion has a less than shiny coat, a female with a better coat is mated to him. Each succeeding generation should get closer to the ideal for the breed.

Genetic testing can help determine whether a particular breed (or specimen) is a carrier for some of the more serious genetic diseases. For example, the OFA has a list of breeds in which degenerative myelopathy is a concern. Such breeds like Great Pyrenees and Pembroke Welsh Corgis are on the list. The same organization specializes also in scoring dogs for hip and elbow dysplasia based on phenotypic evidence.

A breeder of one of the dogs on the list would definitely want to test the champion stud (prior to purchase if possible) to see if it is a carrier of this disease. If it is, it should not be used for breeding purposes, and it definitely should not be graded up to a close relative because two recessive genes would make this fatal disease a reality.

On the flip side, a dog not on the list and a dog that does not have a propensity for genetic diseases may be a great candidate for true grading up by mating the stud champion with the pick of the litter daughter.

Why Are Some Breeders Grading Up?

Grading up dogs is a way for breeders to enjoy the showing of a championship dog and at the same time take control of their breeding program in the most cost-effective way. An alternative that is pricier and healthier is to simply breed two very successful dogs but that could cost tens of thousands of dollars to organize; whereas grading up takes a lot more time, but also costs the price of one good dog.

The stud dog gets a lot of exposure by showing well in the ring. The stud actually creates a market for the puppies he sires. The breeder will know the genetics of a bloodline for several generations. The strength of a trait in the particular bloodline becomes a piece of the knowledge that the breeder can use to keep improving the next generation of puppies.

In places where true grading up is both allowed and risks can be reduced by wise use of genetic testing, puppies may exceed the quality of even the champion stud within just a few generations. Of course, there can be setbacks when a trait suddenly makes an appearance as a result of a genetic mutation or because the knowledge of the genetics of dogs is still somewhat a limited science. A breeder that owns all the animals can more easily make adjustments when these setbacks happen. A dependence on external bloodlines by way of newly purchased brood bitches can actually increase the likelihood of these kinds of setbacks happening. A breeder that needs to invest several thousand of dollars in a bitch only to find out she is a carrier of some rare genetic disorder is the kind of financial setback that all breeders aren’t capable of absorbing or at least absorbing more than once in a lifetime.

Breeders that retain a champion stud as part of a breeding program increase the value of all the puppies. The investment in the stud will pay for itself many times over if a breeder wisely uses grading up to whelp great puppies that will go on to win their own shows. A breeder just getting started will be able to build a reputation for producing fine puppies quicker if the investment of a champion stud is well-made, and grading up is used.