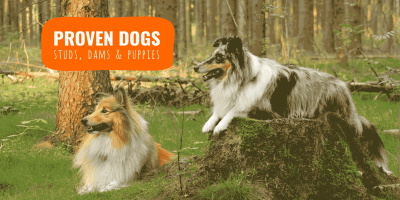 Dogs who simply mated are not proven dogs – they are known as studs or dams. Proven dogs are dogs who have proved that they can produce a high-quality, healthy litter. By definition, a proven breeding dog can designate a female or male. They are essential for all champion dog breeding programs.

Dams and sires become proven breeding dogs only after they produce a healthy, disease-free litter. Breeders, who do not wish to take a chance or are paying higher sums when planning a mating opt for proven breeding stock as opposed to first-timers because for many reasons.

Remember that being a proven dam does not have a set-in-stone definition. Some breeders have a stricter meaning for it than others. And these generally charge a lot more for their breeding fees and puppies.

Why Are Proven Dogs Better?

Fertility is higher in proven dogs. This is especially important because a healthy female dog will most likely have puppies from each mating. A male dog’s low motility or sperm count may cause a failed pregnancy. So owners of female dogs will always try and look for a proven stud for her, to ensure that her heat doesn’t go waste.

A proven breeding dog has a sure-shot chance of producing a high-quality, genetically superior and disease-free litter. Breeders can charge a better sum for each mating because the dog has had successful and good quality offspring before. Proven female dogs can also look after their litter better, with the experience that they have, of looking after the previous one, thus fetching a better price.

Can You Be a Proven Dog at Birth?

Some dogs are de facto pricier and more sought-after right at birth for multiple reasons:

Regardless of how sought-after a puppy is the second it is born, it cannot be proven before it has bred enough to prove its own capacity at passing on all the qualities it has in itself. Being a proven breeding dog, dam or sire is about proving your future generations can be as great as your pedigree.

Of course, some puppies have greater odds at being proven than others. Yet until they have done it once or twice successfully, they cannot be labeled proven just yet.

A proven dog should be in possession of the following qualities, in order to fetch a higher stud service fee and be advertised as proven.

Unless neutered, male dogs tend to sexually active all year round and can successfully impregnate a female in heat, right from the start of their puberty. When they are about five months of age, puppies tend to start humping whatever they can find around them. This may continue until the seventh of eight months. But a dog’s first mating must occur when they reach around one year of age.

The male dog manages to smell the pheromones given out by the female during her estrus or period. They follow the scent to find her and mate with her. A dog’s sexual prowess and the need to mate will decline as he ages. So it is best to make use of his sexual activeness sooner in his lifetime.

Symptoms of diseases and disorders can only be seen in adult dogs, once they are fully mature. For a male dog to be qualified as a proven breeding dog, he must be certified healthy and free of various canine disorders like dysplasia, Cushing’s syndrome, liver disease, etc. Genetic testing can also be helpful in clearing carrier dogs.

One must also do a little background search on how the puppies from its previous mating sessions have turned out, in order to establish the dog’s health.

As mentioned above, a dog’s proven breeding abilities depend largely on how his previous litter turned out. If and only if the dog has previously sired a healthy and disease-free litter, is he qualified to be considered as a proven breeding dog

To be a good proven stud dog, he must testify his awesome genetic abilities by giving proof of his lineage achievements. If his father won awards at dog shows or if puppies from his previous litter have been chosen to perform highly intelligent work, then he is called a proven breeding dog.

As it is in the human world, females simply have to put in more effort to be on par with males even here, in the dog world. In order for a female to be considered as a proven breeding dog, she needs to be a good overall mother.

A female dog matures after the age of five or six months. Female dogs have their first estrus between the ages of six to twelve months depending on their body size. Unlike male dogs, which are sexually active all year round, a female’s sexual instincts are seasonal and only occur bi-annually, when she is in heat.

The whole process of mating, in females, can be divided into two phases:

Proestrus is when the female displays willingness to be mated with, she flirts and shows pro-activeness when approached for coit by a male. This phase lasts around 9 days in total, during which her vulva swells progressively. If a male dog tries to mount her during this phase – she can get really angry!

At the end of the proestrus, is when she enters the standing heat phase, also called estrus. This is when she lets a dog mount her and mate with her. This period also lasts around 9 days.

A female is considered a proven breeding dog when she has grown up to be a healthy and happy dog herself. She shows no sign of dysplasia or is cleared of any serious medical condition. A playful, active and emotionally and behaviorally wholesome female is what makes for a sought-after proven dam.

A female who develops problems during or after her pregnancy becomes a failed candidate for a second litter, owing to her own health. This means, that the owner or breeder needs to be extra cautious of her health, post-partum. He needs to make sure she isn’t exposed to unhealthy or poor hygienic conditions and has salubrious surroundings. She will need all of her breeder’s, love. care and affection to qualify as a beneficial, proven dam.

Carried a Pregnancy to Term

Apart from being healthy herself, she should also have given birth and brought up at least one litter, to be able to qualify as a proven dam. A lot of events can disqualify a female dog from being described as proven, including:

All of these unfortunate events would generally dismiss a female from carrying a pregnancy to term in a healthy enough way to be considered as proven.

A very important quality of a proven female dog is the birth and upbringing of a healthy litter. Usually, if the puppies are weak or don’t have a sturdy immune system, they may be prone to contracting diseases right after birth. Sometimes, even the mother can contract numerous infections post birthing. This is when the breeder’s role comes into light. The owner must be extra careful of the surroundings of the mother and baby.

A lot depends on how well the mother looks after her puppies. Right from how well she cleans them up to how she feeds them and protects them. Her lactations also have to be adequate and nutritious for the puppies. When these puppies grow to become skillful dogs or lovable pets in families, the female becomes a sought-after proven dog.