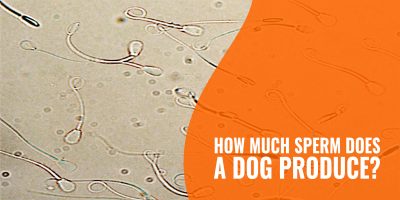 Knowing how much sperm dogs produce is a vital component of dog breeding. By looking at the number of sperm your dog produces, you can decipher whether their semen is normal or not. This helps breeders to verify the quality of their stud’s semen. Good quality semen can be chilled or frozen for selling or later use.

Being aware of how much sperm a dog can produce also helps to evaluate a stud’s breeding soundness – it helps to identify subfertile or interfile dogs. Sperm counts are also requested by the American Kennel Club (AKC) in some circumstances. When young or older studs are used for breeding, the AKC asks for documentation, including a semen evaluation, to prove the stud’s ability to sire.

The Quantity of Sperm that a Dog Produces

The average volume of dog ejaculate ranges anywhere from 1 to 30 mL. Dog semen is produced in three fractions. The first fraction is small in volume at less than 5 mL. It cleanses the urethra of any contaminants before ejaculation. The second fraction is rich in sperm and usually 0.5 to 4 mL in volume. The third and final fraction contains prostatic fluid and few sperm cells. This final fraction lends more volume (3 – 80 mL) to the ejaculate. Volume is not a reliable indicator of semen quality. Instead, it’s measured to find the concentration of sperm in the ejaculate.

Can You Store Dog Sperm?

Storing dog sperm has drastically changed breeders’ ability to carry out planned breedings with success. Vaginal and transcervical insemination is the new norm for many breeders, and it is possible to breed using semen from dogs anywhere in the world, reducing travel costs for breeders and stress for the dogs. Storage is a great way to preserve bloodlines for future use, especially in cases where the stud is due to be neutered. Finally, storing dog sperm is a great way to ensure that breedings can continue when your dog is on a busy schedule or otherwise unable to perform stud work due to factors like temporary illness or injury.

Where to store dog sperm

Sperm storage facilities are widely available. Once you have found a facility that suits your location and needs, make an appointment with the facility. You will need to transport yourself and your dog to the location. Make sure that you bring any relevant registration certificates (AKC, UKC, or other applicable registries), a DNA profile number, and a copy of your negative brucellosis test within the last 6 months. It is also helpful to bring a “teaser” bitch (in heat) with you. This helps to increase your male dog’s libido and encourages a 30-50% higher sperm count.

How is the sperm stored?

Your dog’s semen sample is extended with a buffer solution to protect the sperm cells during freezing. After a sperm count is performed, the sample is further diluted to make up a uniform concentration. The diluted sample is divided into individual straws – the number of straws is decided through the initial sperm count. These straws are stored in liquid nitrogen at a constant -196 degrees Celsius. After the cooling and freezing process, one straw is thawed and thee sperm is examined for motility. The average post-thaw motility rate is 40-60%, meaning that 40-60% of the sperm cells survive the thawing process. This information is also used to determine the amount of semen you will need for insemination.

Can You Sell Dog Sperm?

Stud dogs are widely advertised online for their chilled sperm, frozen sperm, and one-to-one mating services. A typical stud fee for a one-to-one mating session is between $500 and $1,000, depending on the heritage and pedigree of the stud. This might also include a handling fee if the stud’s owner needs to assist with the mating. Similarly, the cost of chilled or frozen semen also varies depending on the stud’s heritage. For this reason the cost of the stud’s semen is typically given on request by the stud’s owner.

You may dispatch your stud’s chilled semen by using a specialized kit. There are many successful chilled semen kits commercially available. The CLONE Chilled Semen Kit has been successfully used for over 25 years, especially in North America. No special training is required as the kit comes with instructions and equipment. Alternatively, some veterinarians offer chilled semen kits and may be able to assist with the process. If in doubt, ask for referrals from other local breeders!

If you choose to sell your dog’s sperm, you must consider the ethics of doing so. It’s crucial that you get your dog tested for inherited disorders that are known to affect your breed and look for general DNA testing. You should also avoid collecting too much sperm from your dog. Although sperm production in dogs occurs constantly, taking too much can lower your dog’s sperm count and reduce semen quality.

How Much Sperm Does a Dog Produce – FAQs

Have any more questions about how much sperm dogs produce? Feel free to refer to our Frequently Asked Questions section for more information!

How much sperm does it take to get a dog pregnant?

It can take two or more doses of sperm for a dam to become pregnant. When chilled or fresh semen is used, insemination should be done two to three days after the initial Luteinizing hormone surge. The second dose should be given two to three days later.

If using semen of compromised quality, breedings should occur on the dam’s most fertile days. These are days four, five, and six after the LH surge. In any case, pregnancy rates seem to improve with an increase in the frequency of insemination.

How long does it take for a male dog to generate sperm?

It takes 60 to 62 days for a dog to produce one sperm cell. Then, it takes a further two weeks for them to fully mature. This process occurs throughout the year. Certain conditions can influence sperm production, so if your dog no longer produces enough sperm, consult with a vet. Most male dogs are sexually mature and producing sperm by 10 months of age. The exact age varies depending on the breed, with larger breeds tending to mature later than smaller breeds.

How often can you collect sperm from a dog?

A normal male dog can ejaculate every two to five days and maintain their daily sperm output. However, frequent ejaculation influences the quantity and quality of the dog’s semen. To ensure good quality sperm, semen should be collected no more than every other day on a regular basis.

Can a male dog run out of sperm?

It’s not possible for a male dog to run out of sperm. Unlike bitches who have a set number of eggs from birth, male dogs constantly create new sperm. Dogs can, however, produce low numbers of sperm. Frequent breeding, recent testicular insult, and obstructions such as tumors can lower the amount of sperm that your dog has. Sperm cells can also be killed off. A common cause of sperm death is latex toxicity from re-using AI equipment. The use of disposable artificial insemination kits prevents this issue.

To answer the question of how much sperm dogs produce: 10 million sperm are produced per pound of body weight. This means that a 30-pound male dog should produce 300 million sperm in his ejaculate. Most normal studs exceed this count significantly. Good quality sperm can be chilled or frozen.