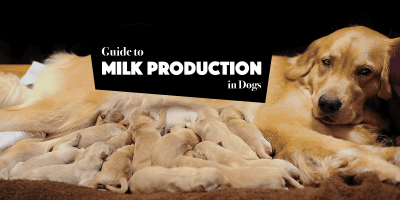 As a dog breeder, one of the most unknown aspects of female pregnancy is often her milk production. We don’t know what exactly is going on in a lactating dog, and we are further lost when cases of lactation failure occur.

After dozens of emails received, we decided it was time for us to write up and publish an article about milk production and lactating dogs. We are also going to cover agalactia, which is a medical condition in which the female’s lactation fails completely or is insufficient.

Nature is well made. A nursing bitch should, without any problem whatsoever, produce enough milk to feed the entire litter of puppies for weeks. Of course, the mother should be fed adequately with a hypercaloric diet — she now needs enough food to fuel her own recovery, but also the growth of all those puppies!

Inevitably, some issues will arise once in a blue moon and the milk production may become insufficient too early. Generally, dog breeders at that time already have started the weaning process so it’s not a big deal.

Before talking about problems, let’s learn all about colostrum and milk production in lactating female dogs.

What is the colostrum or first milk?

The first milk that the mother dog will pass on to her puppies within the first 24 hours after giving birth is called colostrum. This particular milk is extremely important (as much as in humans.) Why? It contains all of the essential nutrients, vitamins, electrolytes and especially antibodies that complete the whole immune system of a puppy.

Wait, so does that mean puppies don’t have an immune system at birth? Not exactly – puppies just have a very weak immune system at birth so they need the colostrum of their mother because of these antibodies. Passing through colostrum is actually one of the ways mothers will pass their “immunity” onto their puppies, also known as passive immunity, with the other being through the uterus before giving birth.

ALSO READ: the comprehensive list of what’s in a whelping kit

When should the milk production start?

Milk production or lactation in pregnant dogs is usually a sign that the time of delivery is very near. The typical pregnancy period of dogs is around 63 days. Lactation should progressively start somewhere near that deadline, typically 1 week or so for first-time pregnant dogs and around 1-2 days for those that have given birth before.

But take note: not all dogs will squeeze out milk before their due date. However, it doesn’t hurt to test their mammary glands to find out if she is lactating, which can be a sign that labor is near. Aside from the lactation method, you can also measure the temperature, which drops to 99 degrees F when she is about to give birth within a day.

Is the milk enough for all the puppies?

A group of newborn puppies usually ranges from 8 to 12 in number. After giving birth, the mother will nurse her puppies for about 2 hours a day for the first 7 days. The milk intake of a puppy varies per breed, but similar breeds to the Beagle will get about 5.5 ounces per puppy on the average, which obviously would be the larger the breed gets.

As the owner, you should ensure that all of the puppies get enough of their mother’s milk. However, there can be many hindrances that will get in the way:

What is spontaneous lactation?

Spontaneous lactation usually occurs during a false pregnancy in which the lactating female dog isn’t even pregnant and will not produce puppies, yet produces milk. Such females going through a pseudopregnancy may also show other pregnancy symptoms.

Usually, spontaneous lactation is caused by a hormonal imbalance and may start to show after the heat season of the female dog. In some cases, they may occur if your dog has gone through ovariohysterectomy, which is an operation regarding removing the uterus and ovaries (usually done to prevent pregnancy or following a dog abortion.)

Symptoms of a Spontaneous Lactation

While this kind of pseudopregnancy will commonly last for only a month, some dogs will keep them for a long time. Here are the signs and symptoms you need to watch for when it comes to spontaneous lactation:

False pregnancy in dogs don’t always need treatment, but your vet can suggest hormonal supplements, especially if your dog has gone through ovariohysterectomy. Other treatments include special collars that prevent self-nursing and temperature packs to prevent lactation stimulation. Changes in the dog’s diet plan will also help reduce lactation.

Stimulate the Milk Production of a Lactating Dog

A lactating female dog with normal health will definitely produce milk for nursing. However, you can also help your nursing bitch to produce more milk, especially if she has produced a lot of puppies in one whelping.

These tips should be proactively followed if the female in question faced some challenges with her lactation level with a previous litter of pups.

A great selection of liquids to give to the nursing female dog may include the following:

Like humans, a lactating dog will need all of the nutrients she can get when feeding her puppies.

In this case, at least 17% of fat should be in her daily meals. The food intake of a lactating bitch should be topped up with an additional 20% of calories with each puppy she is nursing. This is a lot of food indeed, especially when a non-negligible part of nursing bitches experience a slight to severe loss of appetite.

A nursing dog may have any of the following:

It is best to feed performance dog food for a nursing female dog due to the energy requirements at an all-time high. What’s more, such dog foods also contain a lot of fat and calories, amounting to about 20% on the average, which is important for the nursing dog’s nutritional intake.

Any food with vegetable oil, lard, and grease can have a 30% increase in your dog’s calorie content. In addition, if you are used to feeding your dog cheaper food then now is the time to switch to pricier dog food for the best nutrition while nursing her pups. 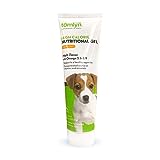 Supplements for a lactating bitch are important because they contain vitamins and minerals. Some of them also contain trace elements. Among the trace elements that are commonly found in dog food (and other pet food) are zinc, selenium, manganese, copper, and iron.

However, these minerals should ideally be obtained from organic foods, as commercial ones might only contain artificial fillers that will not be digested by your dog easily as organic trace elements. With regards to supplements, it is best to ask your vet to make sure that the supplements you give to your lactating female dog are alright. Considerations may include calcium supplements, additional calories from olive oil and cheese products among others.

Whether our dog is pregnant, lactating or just normal, dog treats are extremely important. Believe it or not, treats are part of a dog’s diet, and unfortunately, because of cheap costs, the popular manufacturers use carbohydrate-packed fillers. All of this results in a non-nutritious treat, which is unfortunate since dogs tend to really love eating their treats.

A few nutritious dog treats you should go for include fresh fruits, cheddar cheese, and dried beef (non-sugary jerky). Also, consider anything that is high in calories such as sweet potatoes and salmon. Meatballs, chicken, and eggs are good alternatives should the two aforementioned foods are not available.

However, change your habits during your bitch’s nursing period and avoid buying treats that are cheap in quality. Just because you need to feed your dog high-calorie treats doesn’t mean you can just grab a box of doggy treats at the grocery store. Make sure you check the label for nutritional values and the ingredients list.

What To Do In Case Of Lactation Failure?

Agalactia is lactation failure for dogs.

The usual cause of this condition is that some females may embed behavioral problems, feel stressed a lot, become frightened and produce the epinephrine hormone, which tends to drive away oxytocin, which is the very hormone needed for milk production. Consequently, the puppies won’t be getting their milk (or at least, not enough.)

In some rare cases, female dogs may have genetic conditions in which their breasts do not develop at all. However, most frequently, few nursing bitches will simply not have sufficient milk for all of the litter of puppies, which can be addressed by feeding her more calorie-rich foods and consulting a vet for the best options.

For those with females suffering from lactation failure, here are some suggestions.

Hand-nursing ideally refers to the fact that you have to feed the puppies yourself using bottle feeding. When hand-nursing puppies, make sure the feeding bottles are clearly sterilized in boiling water for five to ten minutes and then air-dried to remove bacteria, just as how humans would do for baby bottles.

Some female dogs are totally unable to produce milk, usually due to their genetic problems or, more commonly, lack of oxytocin. A natural milk replacement may consist of goat’s milk (1 cup), plain yogurt (1 cup), egg yolks (2) and sterilized water (4 to 6 tbsp.), mixed together in the said portions.

In addition, you can also put in a teaspoon of sugar and/or corn syrup, but only when needed since there is already a lot of sweetness coming from the goat’s milk. It is only a great ingredient to add if the puppies tend to lose their sucking reflex, which prevents them from getting milk. 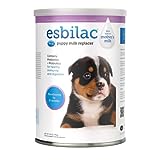 There is a difference between tube feeding and bottle feeding for puppies that can’t get milk directly from their mother. If you need to do it in one go and live a busy life, tube feeding is for you, since it is easy to feed an entire litter at once. The only risk is that you need the exact amount of milk to avoid puppies drowning in milk.

On the other hand, bottle feeding is a bit of a hassle because you need to ideally feed them 2 to 4 cc of milk per 30g of puppy weight for every three hours. However, bottles are the safest way to feed whelps and ensure that all puppies get the right amount of milk.

Just because the mother can’t produce milk doesn’t mean she can’t take care of her pups. Make sure the mother is still there to give warmth and support, as she usually helps puppies train in relieving themselves. Remember that a mother’s touch is important in the first few weeks of giving birth.