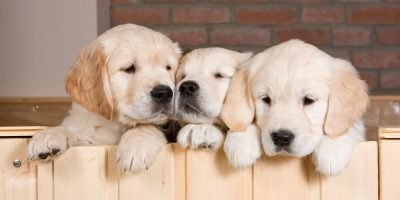 Dog breeding is a big business, and there are a lot of dog breeding statistics probably you didn’t know about.

If you’re looking to become a breeder yourself, or are just interested in buying a puppy from a professional breeder, you might want to read some of these facts about dog breeding. We want all of our readers to be properly informed so that they can make the best choices and only take part in ethical breeding.

Puppy mills are mass breeding facilities that essentially use dogs as breeding machines. They are often kept in horrific conditions and the puppies are sold through pet stores, online ads, and at flea markets.

Although it is impossible to know the exact numbers, it is thought that around 10,000 puppy mills are currently operating in the US, both legally and illegally.

2. 70% of Puppy Mills That Operate Are Illegal

Of the 10,000+ puppy mills currently operating in the US, around 70% of them run illegally. This means they are unlicensed and operate under conditions that do not meet animal welfare standards.

Inside puppy mills, mothers often spend their entire lives in the dark, cramped in tiny cages with little to no personal attention. There are often multiple dogs in a cage, and they are forced to live in their own mess. Dogs can be made to breed far too young, sometimes from four months of age. When they become too old to breed, they are either abandoned or killed. Puppies born in puppy mills are often unhealthy and unsocialized.

Although awareness is growing, this statistic is not showing any signs of lowering. In fact, the number of illegal puppy mills seems to get higher every year, because the industry and its demand continue to boom.

3. More Than 2 Million Puppies Are Sold Every Year

More than two million puppies are sold in and around the US every year. This includes puppies being bred and sold by legally licensed breeders, unlicensed hobby breeders, illegal breeders, pet stores, and so on!

4. More Than 3 Million Puppies Are Born in Illegal Facilities

Unfortunately, of the 4+ million puppies born in puppy mills every year, around 3 million of them are bred illegally. This means that more puppies are born and sold from illegal breeding than legal breeding in the US at present.

5. More Than 1 Million Puppies Are Born Every Year by Legal Breeders in The US

On the bright side, over one million puppies are born and sold from legal, licensed breeders every year. Although this is not a guarantee of ethical practice and good breeding, it’s a step in the right direction.

Licensed breeders must be vetted by the US Department of Agriculture (USDA) who will inspect every aspect of the business, ensuring that it meets federal laws and animal welfare standards.

Again, bad breeders can still slip through the cracks. There are legal puppy mills that operate by meeting basic welfare standards, although they push the limits and are still inhumane. But generally, legal and licensed breeders, especially when they are a small-time or family business, are more trustworthy and responsible.

When buying from a breeder, always seek out reviews from previous clients and only buy from highly-rated, reputable breeders.

Throughout the US, over half a million dogs are kept solely for breeding purposes, and over half of these are mothers.

7. 70% of Breeding Animals Are Female

During heat, the female is fertile and will accept a mate. This recurs approximately every six months until old age.

Of the half a million dogs kept for breeding in the United States, around 30% are male, this equates to around 150,000 dogs. On average male dogs become fertile after six months of age and reach full maturity at around 12 – 15 months old. Healthy stud dogs can remain sexually active and fertile into old age.

On average, female dogs that are used for breeding will be actively bred until six years of age. Legally, no dog over the age of 12 should be reproducing, and most breed clubs agree that female dogs should retire before the age of 8.

Most responsible breeders feel that a female dog should have 2-4 litters in her lifetime. In the United States, there is not currently a law that restricts the number of litters one dog can have. In the UK, breeders cannot legally breed more than 6 litters from a dog, and most kennel clubs won’t register more than four litters from one dog.

10. Pregnant Dogs Increase Their Food Intake by up to 50%

Female dogs are only pregnant for about two months, but during that time, their food intake should gradually increase to around 35% – 50% more than normal. The exact percentage should be determined by a vet and will depend on the dog’s size and breed.

Meals should be little and often, however, as unborn puppies can put pressure on the mother’s stomach, making it hard to eat large amounts!

11. Dystocia Occurs in up to 5% of Birthing Dogs

Dystocia – meaning difficult birth – occurs in 2-5% of dogs. It encompasses a range of difficulties, including abnormally slow dilation of the cervix, to entrapment of the fetal shoulders after delivery of the head.

Pregnant dogs should attend regular vet visits, and breeders should prepare for birth with knowledge of the signs of labor, birthing complications, and whelping supplies.

12. The Average Litter Consists of 6 Puppies

Litter size very much depends on the size and breed of the dog. Smaller dogs tend to have smaller litters, with toy breeds having around three to four puppies in a litter. Large breeds, however, can have up to eight or nine puppies in a single litter.

Medium-sized breeds of dogs usually have around 5-6 puppies in a litter, and six is the average litter size for dogs generally.

13. Puppies From Mills Are 41.6% More Likely to Develop Health Issues

Dogs that are born in puppy mills are over 40% more likely to develop health issues than other dogs. This is due to the poor and unsanitary conditions they are born in at the mill and a lack of veterinary care. This is not only terrible for the puppies but heartbreaking and expensive for their new families when they discover that their new pup is unwell.

14. Puppies From Mills Are More Likely to Have Poor Mental Health

Studies by animal behavioral scientists have shown that puppies born in mills display behavior consistent with poor mental health into their adulthood. They’re more likely to experience both social and non-social fears, anxiety issues, and a general lack of trainability including struggling with house training.

15. Around Half of The Puppies From Mills Don’t Survive Past 12 Weeks

Furthermore, around half of the puppies born in puppy mills do not survive past the first 12 weeks of their lives. This, again, is partly due to the poor conditions they are born in and living in for the first couple of months of their lives.

It is also due to the lack of veterinary care they receive, and often, fake health documents given to the owners. Health guarantees are papers that document the healthcare given to a newborn puppy, and this includes vaccinations.

Many pups from illegal puppy mills fall extremely ill after being homed because their owners believe them to be vaccinated when they are not and take them out into the world, unprotected from disease.

16. A Significant Portion of Bred Puppies Are For Animal Testing

According to the USDA, around 6,000 dogs were purpose-bred inside laboratories in 2019. This means that they were bred specifically to be used by scientists for animal testing.

In the US, dogs can legally be used to test the safety of drugs, procedures, and medical devices. These experiments are often frightening, traumatic, and extremely painful. They can also be bred to have fatal diseases, such as muscular dystrophy, in order to test different treatments.

Many animal lovers are against animals being used for medical testing. If that includes you, you can visit The Humane Society’s Taking Suffering Out of Science campaign page for more information.

17. The Market Size For Pet Breeding is $2 Billion in The US Alone

In 2020, the pet breeding industry brought in $2 billion in revenue. So it’s a pretty booming industry with plenty of opportunities to make money. That said, as we’ve explored above, a lot of that money is made unethically and illegally.

Our advice for anybody looking to become a professional dog breeder is to remember that it’s quality over quantity. A few happy, healthy dogs are infinitely better than hundreds of sick and miserable ones.

Again, the pet breeding industry is huge and full of work opportunities for both skilled and unskilled employment. However, if you’re looking for a job with animals that involves breeding, you’re better off looking into a smaller business that genuinely loves and takes care of its animals. Avoid large, corporate businesses that prioritize making money above the welfare of the animals they breed.

Fortunately, action is starting to be taken to combat the issue of illegal puppy mills. In 2018, California became the first US state to ban the sale of non-rescue pets in pet stores. In other words, pet stores can only sell dogs that they got from shelters.

This is really helpful because many dogs from mills are sold through pet stores. In fact, almost all dogs sold in pet stores come from puppy mills. So, banning the sale of animals in retail stores cuts off an entire avenue of the dog mill business. As of 2018, any business violating the law will receive a $500 fine.

20. Every Year, The Humane Society Releases a List of 100 of The Worst Pet Dealers

In order to help prospective buyers of four-legged family members, The Humane Society releases a list of the 100 worst pet dealers in the US every year. This helps budding owners to avoid unethical breeders. They also have a page called Where to get a puppy that informs readers of the best places to buy a puppy. Their top tips include visiting the breeder’s premises and avoiding pet stores.

Those are our 20 dog breeding statistics you didn’t know about! We hope you enjoyed reading through these interesting and eye-opening dog breeding facts. Whilst there is an overwhelmingly sad side to dog breeding, Breeding Business aims to educate and encourage ethical dog breeding through our handbooks and courses.

Breeding dogs is not illegal in the United States. However, breeders must make sure they are complying with licensing and welfare laws in their state or they could face a fine or even prison time.

Breeding dogs is fine if done ethically. The problem occurs when the business aspect becomes more important than the animals’ welfare to a breeder. We insist that owners only ever buy from reputable, trustworthy, ethical breeders and that no one becomes a breeder who isn’t willing to put the dogs’ needs first.

What’s the difference between puppy mills and small-time breeders?

Puppy mills are mass breeding facilities that essentially use dogs as breeding machines, and the dogs are kept in very poor, cruel conditions. Small-time breeders focus on quality over quantity and often specialize in a single breed. They care about both the dog’s and puppies’ health and happiness.

Are puppies from mills unhealthy?

Dogs that are born in puppy mills are over 40% more likely to develop health issues than other dogs. This is due to the poor and unsanitary conditions and a lack of veterinary care. In fact, almost half of puppies from mills don’t live past 12 weeks of age. Dogs from mills are also more likely to experience behavioral and emotional issues, such as fear and anxiety.

What is The Humane Society?

The Humane Society is a wonderful not-for-profit charity organization that aims to stop cruelty against animals in all forms, including puppy mills. Their Puppy Mills campaign works to improve the standard of care for dogs in mills across the USA. They have also rescued and rehomed more than 10,000 dogs from over 50 different puppy mills across the US since 2006.