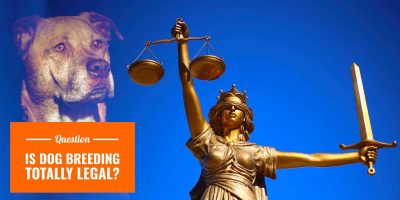 In the United States, dog breeding is a legal activity as long as the breeder is not found guilty of animal cruelty. Some states may require some dog breeders to be sanctioned with a license if they reach specifics thresholds. Some of these metrics include the number of litters produced during the year or the minimum number of breeding bitches owned at any given time.

In a general sense, the act of selecting dogs and their prospective mates in order to produce offspring is a legal act, as well as the profits that are gained from said activities. Tax avoidance is illegal, though, so make sure you complete your tax forms accordingly as a dog breeder.

Is Dog Breeding a Legal Business?

Dog breeding performed for business endeavors is legal by all means. Many dog breeders differentiate themselves from ordinary dog owners when their sole intention is to produce quality specimens to then trade against money, or specific perks (pick of the litter, for example).

There is nothing illegal about breeding dogs as a business! The unfortunate case with professional breeders being legal is that we also tolerate breeding low-quality dogs as well. Inevitably, this poses problems ranging from overpopulation to overbreeding of trending, yet unhealthy, designer breeds. Indeed, any dog breeder can produce any grade of dog type, often with less than desirable attributes, diseases, or deformities, and because of the law, there is nothing people can do about it. Being bad a being a breeder is as legal as being bad at being a store clerk.

Dog Breeding Laws Are Toughening Up!

Furthermore, dog breeding has its share of warning labels and red flags that should always be considered by any dog owner who wishes to breed their dogs. The overpopulation of unwanted dogs has become rampant and shows no sign of ceasing anytime soon. Many dogs are left by the breeders or become strays and many, in these cases, do not survive the ordeals.

In an effort to weed out the “extras” and to avoid the increasing “puppy farms“, laws are becoming stricter with the hopes of constraining the issue. In fact, in some places now, laws are being put into legislation whereby they will mandate dog breeders who wish to profit in the breeding business to, first, register as a breeder within a central database. These laws, of course, will be based on individual state and legislative area laws in which the dog breeder lives.

However, the abuse and cruelty suffered by dogs are illegal and punished by the relevant authorities. Any type of animal abuse, also termed as animal neglect, is subject to judgement and punishable by law. This imposes great danger in the animal community and encourages health and safety standards to be enforced in any pet-related environment.

Animal abuse is defined by the deliberate harm of an animal that results in physical pain, neglect, starvation (and denying water), or anything that leads to the suffering or death of an animal. These actions are taken very seriously and punishments will depend on the city and state of the person in question.

Do you need a permit to breed dogs?

Most dog breeders do not need any form of license or permit in order to breed dogs. In fact, many dog owners can be considered dog breeders if any of their dogs are reproducing any number of puppies, even a single one. Though, we should stick to the legal definition of what exactly a dog breeder entails and how different it is from a commercial dog breeder.

Generally speaking, a commercial dog breeder is defined as someone who produces a rather large number of dogs say, more than 20 in a year, for example. After someone has produced x number of puppies per year and happens to own x number of female dogs for breeding purposes, then that person may need to apply for a commercial breeding license. In this case, the dog breeder will have to comply with more regulations. These regulations are mandated by each individual state, if in the U.S.

Dog breeders must learn the laws and restrictions regarding the act of breeding dogs on their particular property and location. You must know if you can even have dogs on your property, and if so, how many. Each puppy may be required to be registered with a local authority in which they will issue your puppy a tag that needs to be worn at all times. In addition, your dogs will be required to carry a collar and a medallion that will display the important contact details. If any breeder wishes to breed a larger number of dogs for commercial purposes, then permission from their local authorities must be given. Whether or not permission is issued on these standards depends very much on the area in which the breeding grounds will take place and how tough the state guidelines are.

Sort out your taxes, though

All dog breeders must understand that the act of breeding dogs, even if it is just a hobby, that is generating income is taxable. This is extremely important so let me repeat. You may not need any license, and you can only breed and sell your dog once, but any revenue generated from selling dogs must be declared and may be taxed, eventually.

When you sell a puppy, this revenue taxable. Any activity that is generating revenue can certainly be a cause for a red flag as far as the Internal Revenue Service is concerned. For that reason, dog breeders need to sort out their taxes regarding any business that is done with their pets. Furthermore, tax avoidance is punishable by law, therefore, any income a dog breeder obtains through any form of breeding or related activities such as dog shows and other prizes must be reported.

It’s highly advisable that any dog breeder, whether breeding by profession or hobby, should seek out a reliable and professional tax advisor. A major tip for new dog breeders is to be very careful with your bookkeeping records. For example, if you have several dogs yet only one is for breeding purposes, then you wouldn’t claim all of your expenses. In this case, 25%. A dog or two that has been sold for some extra money can be put on Line 21, thereby, claiming that income as a hobby expense.

For those breeders who are serious about making a business out of breeding then it’s advisable to open up a separate bank account that will only be used for the incoming and outgoing transactions of only your kennel. This will ensure a paper trail of activity in the event that you do get audited. Some experts even recommend holding on to your tax records for seven years. The IRS will look for proof that a breeder has the intent of making money. Factors such as advertising, owning your own dog breeding website and having a business plan, as well as a license, will provide the necessary evidence of the business intent in each breeder.