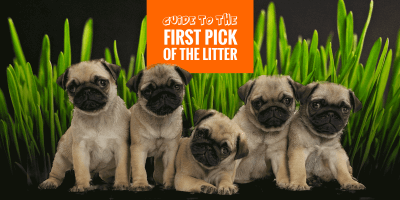 A dog breeder that is granted the right of having the first pick of the litter can, once the entire litter of puppies is born, be the first one to look at them and choose which one(s) they will bring home. For most people this is just a matter of picking the cutest pup, but in dog breeding and dog showing circles, it’s a huge advantage when you have a trained eye to spot a potential future champion.

Let’s look into this in more details!

What is the Pick of the Litter?

The first usage of the term pick of the litter refers to the right to choose first a puppy in the litter. In many cases, this right is in return for the stud. Pick of the Litter is a contractual and legal right to possess whichever puppy of a litter that person wants. It may be that the Pick of the Litter objectively is the runt with disqualifying characteristics. Why the person wants that particular puppy is irrelevant. The only thing that matters is that the person with this right acquires legal ownership of a puppy before anyone else, and the dam’s owner relinquishes ownership and possession of it.

Pick of the litter may be synonymous with First Pick of the Litter. However, there are sometimes ranks when it comes to the pick of a given litter. A purchaser may get Second Pick of the Litter, Third Pick and so forth. The value of each puppy and each pick, also, depends on how many whelps there are in that litter. A pick in a single-puppy litter would obviously have the most value since nobody else would get a puppy from that litter. Again, the term pick of the litter is referring to a legal right to choose next. A purchaser usually gives a deposit to the breeder in exchange for that right, and as a contract it would be legally enforceable if the breeder suddenly changes his or her mind.

[pullquote-right]Do not pick a puppy randomly. Have a plan and know what you are looking for so you can choose objectively rather than emotionally.[/pullquote-right]

The other usage of the term pick of the litter comes close to the colloquial use of the expression that can be used for many things. In this usage, it is meaning the “best” of the litter. Between dog Breeders it is a reasonable expectation that the person with the right to pick first will pick the best puppy. Because the expression has such broad colloquial usage it is not the expression or description most professional breeders would probably use to describe a puppy with wonderful characteristics that are show worthy.

Who Gets the First Pick of the Litter?

The answer to the question of who gets the first pick of the litter depends on each litter of puppies and what a breeder has agreed with third parties.

Puppies are considered property in every jurisdiction in the United States. (Although there are significant moves, to change the legal status). The right to possess a puppy is a property right that can be bought and sold. The breeder who owns the dam will possess and own the puppies.

The breeder may enter into contracts that sell the puppies even before they are whelped. A very frequent contract is the exchange of stud services for the right to first pick of the litter. These kinds of contracts are so common that templates are readily available online for use, including in our bestseller, The Dog Breeder’s Handbook. For every written stud contract, there are probably a dozen gentleman agreements and verbal contracts made between breeders. An example of that kind of contract is linked here.

Note that the right to pick first is only the right to pick. It doesn’t necessarily mean right to the puppy itself. Often if stud services weren’t involve, another payment of money will be made before the new buyer obtains possession of a puppy. If a buyer fails to pay this money, the right to pick of the litter may be terminated, and passed on to someone else.

What to Look For in a Pick of the Litter?

It is difficult to know how a puppy will look when it’s full grown. Still, a professional breeder will know the breed’s standards and be able to cull out puppies with obvious disqualifying traits. In a litter of four puppies with three of them bearing disqualifying traits, the pick will be pretty obvious. Usually, though, the dam’s owner will have better luck and will have six or more puppies that all look pretty good at first examination. The right to pick of the litter is a valuable right and most breeders won’t squander it. A thorough and thoughtful decision will be made—generally based on an objective set of qualities than an emotional choice like regular family pet owners do.

The picking of a champion is not going to be the same as doing the personality matches for a companion dog. Whether or not a puppy is the “Rebel” or the “Independent Thinker” may not be a professional breeder’s first consideration when making that decision. Most professional breeders are looking for a puppy that will mature into that perfect dog, i.e. that will meet the standard for the breed and has the temperament to show them off. Some breeders especially for sporting and gun dogs may want a dog with a more dominant (even that “Bully”) personality with a strong desire to retrieve that displays even as a young pup.

In any event, any pick of the litter will look healthy from tip of the nose to tail. The nose should be clear of any crusts, and be the right color for the breed (or pink if the puppy is too young to have yet acquired an adult nose color) eyes should be clear, and the ears should be free of any mites or infection. The coat of the puppy should be free of any parasites and be as close to the standards of the breed as would be expected of a puppy that age (coats can change colors), and the belly of the puppy should be round but not bloated. Also, stools of the puppy should be looked at for any signs of parasites or diarrhea. Most stud contracts which include payment by pick of the litter allow for an independent veterinarian examination before closing the deal and accepting the puppy.

At What Age Do I Choose the Pick of the Litter?

The answer of the best age to pick depends on the breed of dog and the characteristics a breeder is looking for. Often, the window of selection of a first pick will be clearly written in the contract. This is to make sure the ‘picker’ does not wait it out too long to take a decision. Indeed, if the first pick takes a long time, it makes the sale of all the puppies in this litter delayed and way more difficult.

It is very hard to determine how a puppy will turn out as an adult. Puppies change, and morph a lot from their first days to few weeks later. Pink noses can become a perfect solid black within days. Spots can suddenly appear, and keep appearing for weeks. The limbs of a puppy may mature into a proper curve or end up with an out turn bend.

As William J. Given humorously remarks in “That Pick of the Litter Puppy“, the only time to be sure of a puppy’s show potential is when it’s a day before 365 days old or a day before it goes from being puppy to an adult dog. William J. Given takes a pretty cynical view of the whole idea and tongue-in-cheek opts for a newborn puppy as the best time to pick.

Most breeders would probably disagree with such a very early age. For example, a breeder sizing up an Australian Shepherd puppy would decidedly pick an eight week old puppy with a solid black nose over a puppy with a completely pink nose. At eight weeks old, a solid pink nose could mean that the puppy will bear the disqualifying “Dudley nose“ that shows up from time to time in the breed.

The answer of when to pick is whenever a breeder is comfortable with the pick, but most picks are made at six to eight weeks of age; while some breeders prefer to know during the first month.

Are Males or Females Better as Pick of the Litter?

A pick of a male or female puppy depends so much on the individual breeder’s needs that generalizations are not too meaningful. A look at the list of canines that won Best In Show (overall) would say take a male if a stack of awards is a breeder’s most pressing goal. Indeed, dogs have won the top award 71 times and bitches only 39.

Now there are multiple reasons for the discrepancy. The most likely is that the bitches don’t show well during a heat. Their time to show, also, is more frequently used to whelp a litter. Pregnancy and puppies take them out of the competition for several months at a time. Bitches simply do not do as many shows and, therefore, do not win as many. Males can compete and increase their dollar value. Males become capable to reproduce at 6-9 months (older for the larger/giant breeds) and multiple stud contracts can be entered into without a single piece of fur being lost for hormonal changes the entire time. Males, therefore, have a slight advantage in being the better pick of the litter.

You can also read our articles on why male pups are more expensive, and the sequel, on why females cost more than male pups.

Should I Pick the Runt?

The short answer is don’t pick the runt. The decision to pick the smallest of the puppies is a decision that should have a reason. The runt is more vulnerable to congenital/developmental problems than its normal littermates. Runts have their fans, but a first pick of a runt would be an unusual choice.

If the runt is the only puppy at eight weeks that does not bear some disqualifying characteristic, the runt may be that choice. On the flip side, a special characteristic that a breeder is looking for may appear only in the runt, and make it the better decision for that particular breeder’s program. Many runts with proper nourishment do grow to normal adult size and evolve into very healthy lives.

When to Prefer Cash Over the First Pick of the Litter?

Indeed, it is not every litter that will produce a puppy that may be desirable in a stud’s owner’s breeding program. Why would you force yourself to pick a puppy from a litter you know will be average in your eyes? Your stud may be sought after to improve some faults in the owner of the dam’s bloodlines. Therefore, a stud to a lesser quality bitch may be one to ask for cash for. A dog owner must be able to read a dog’s pedigree to understand whether it is worth taking the cash instead of taking the pick.

A pause in a breeder’s program where an increase in the number of dogs is not doable may be a reason to take cash rather than an additional puppy. Since a stud can service many litters, the owner of the stud can take cash for awhile and let the reputation of the stud grow.

Winning the whelping lottery is part chance, and part experience and skill. Professional and responsible breeders play the game, and while some profit from it, all of them enjoy it.